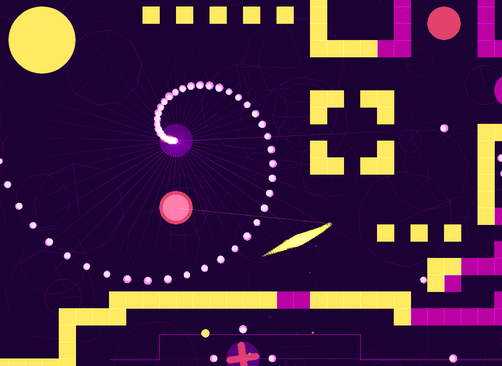 Looking at the name ‘Soft Body,’ I wasn’t fully sure what to expect out of a game with such a title. I certainly did not expect to have such a uniquely crafted puzzle/action game that I would actually find some deeper meaning to.

If anyone here remembers Nintendo’s ‘Art Style’ series of games, where the puzzles were almost unlike anything done before, then that is probably the best start I could give in describing Soft Body to the unfamiliar. It’s a puzzle game, in the sense that it requires a lot of brain power to work out how to move through each level. It’s also an action game, one that requires the on-screen character to dodge bullets and missiles in order to clear the board in a pseudo twin-stick style (without the shooting). At least that is how I would define it, until the game mixes it up again and again, and at that point I stopped trying to define it specifically and just enjoy it for what it is.

The overall idea of the game is far simpler than the execution. The on-screen avatar (herein referred to as the “Soft Body”, as it looks like one of those soft, fluffy, pipe cleaner like ferrets on fishing wire you use to play with your cats) moves around the screen, trying to change all that is purple into yellow. Once everything is changed to yellow, the game progresses. As time goes on, this task is made more difficult due to the aforementioned bullets and missiles being fired at the Soft Body. Once that is conquered, the Soft Body then gets a “Ghost”, which is where the twin stick action comes into play. The Ghost is another soft, fluffy pipe cleaner like object, except this time it’s purple, and can travel through walls and eliminate enemies by touching them. For the most part, the Ghost resides within the Soft Body, giving it the ability to kill foes (but not travel through walls). Utilising the right stick frees The Ghost from its prison to unleash all kinds of death-touching. Controlling both these characters is an often harrowing experience that is sure to get the mind working, but it is done in such a great way that frustration rarely got the better of me.


It’s complex to explain, because the game is so fundamentally strange that it really needs to be played to be understood. Thankfully though, it’s accessible in practice, with a simple but gorgeous art style that comes across like you’re playing an old Atari 2600 game mixed with the animations and fluidity of something much more modern. It truly prevents the game from being too overwhelming, and the odd change of colour scheme over time is enough to keep the game intriguing to continue on with. The sound and music is also pretty minimalistic, only really playing notes when something happens in the level, matching up with the graphical style with only the occasional note being played. This minimalist sound is something that’s been done to death recently (and I was getting sick of it for a while), but when it’s matched with such an art style it’s hard to imagine it being any other way.

It has been hard to explain Soft Body in text alone. I implore you to watch some of the footage in this review to get a better idea of the concept behind the game. It is certainly hard to define, and that can leave some people wanting a bit more of an identity out of the game, others will revel in trying to find a deeper meaning within it. My personal take on Soft Body is that it represents life as a whole. We strive to find that one being to share our lives with, sometimes we need to let that being go in order to advance. Life is always something that gets hard and frustrating but we always need to push through, and life becomes easier when it’s shared. Obviously with any good art like this, others will find completely different meanings, generally projected from our own situations.

It’s relaxing yet intense, sometimes it’s a puzzle game and other times it’s bullet hell. I honestly do find it incredibly difficult to score because there’s no real gauge on what the game should be. Perhaps that’s the beauty of Soft Body? It doesn’t feel like it was made as a game to be enjoyed, it feels like it was a game that was made to be experienced. Like true art, the expression of creative skill and imagination for the appreciation of beauty or emotional power, Soft Body could simply be a piece of art intended to be admired, allowing us to question our very existence. Because of this, maybe, just maybe, Soft Body is the true meaning of games.

Devolver Digital has a new online combat RPG coming in 2017, and it looks good