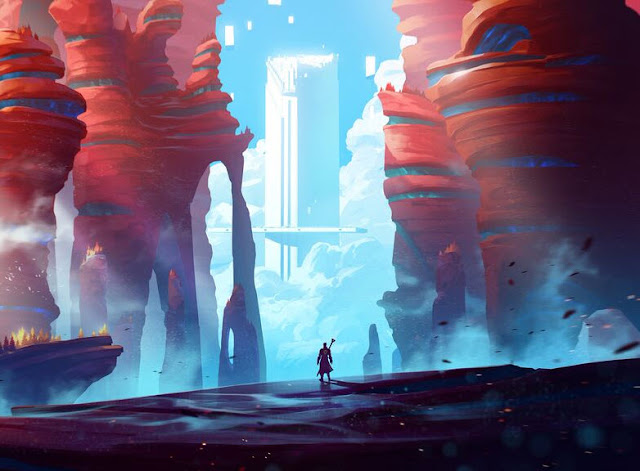 While best thought of as a collectible card game, Duelyst really does not look the part. It has a very stylised pixel art aesthetic mixed with a turn-based system that can make it a challenging game to drop into any one bucket. Perhaps that is the beauty of this game, which has such a unique style to it while still providing plenty of depth and challenge.

Related reading: Of course, you can’t discuss digital collectible card games without mentioning Hearthstone. Matt’s full review.
By now I am a pretty old hand at the whole collectible card game genre, both in digital and physical form. Like many players, I was hooked on Magic: The Gathering more than a couple of decades ago and spent countless hours (and more money than I care to admit) playing for years. I also tried lots of other card games along the way. I also have spent more than my share of time on digital card games ranging from Hearthstone to Might & Magic: Duel of Champions and everything in between.

So imagine my surprise when I fired up Duelyst expecting to see ornately detailed digital cards and instead found myself in a tutorial that had me moving pieces around a grid board. The rules are all quite simple to start, with two primary characters who can summon other creatures and move around a board as they leverage spells and skills against one another to gain the upper hand. In fact, Duelyst reminded me more of a board game initially. 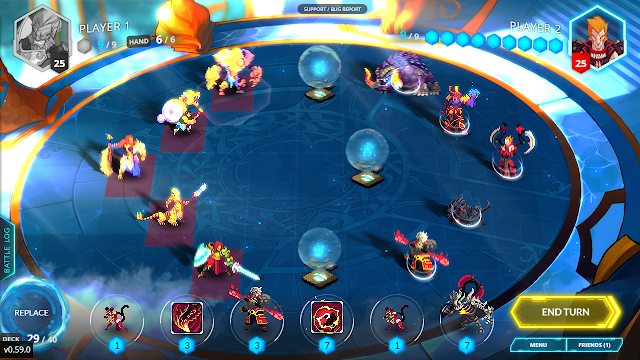 This is just the front end of course, and it all works quite nicely due in large part to the interesting blend of hand drawn stages and pixelated characters that have their own animations. These animations are far from technical marvels – if I am being completely honest they are quite simple really – but considering that there are well over three hundred different types of characters, the unique animations are still a nice touch and appreciated. While the pixel art will no doubt prove hit or miss with some people, I generally enjoyed the style.

Once you move past this interface that the game greets you with, you can then dig into the meat of the game which is the card based system that the combat runs on. Anyone who has played a game like Magic: The Gathering or Hearthstone will likely get the idea of how you build up mana to cast multiple or more powerful cards, creating a sort of power curve where early on your choices are quite limited, but after a few rounds or so you have more plentiful options to choose from. Beyond just summoning characters, you can trigger abilities that might give boosts to your characters or cast spells that deal direct damage to other units. Position on the grid battlefield is what adds an additional layer of strategy to how it all plays out, similar to games such as Scrolls.

The different factions that serve as your primary deck type create the foundation of your decks. You can purchase orbs that basically serve as packs of cards (this is a free-to-play game, as are the majority of these types of titles). I will say that earning the requisite gold to buy more seemed a faster process here than in some similar titles out there. The key is in deck balance. Having too many high casting cost but powerful cards in your initial hand handicaps you during that gradual strength building period, but having nothing but cheap, easily bested cards late in the game can spell doom as well. 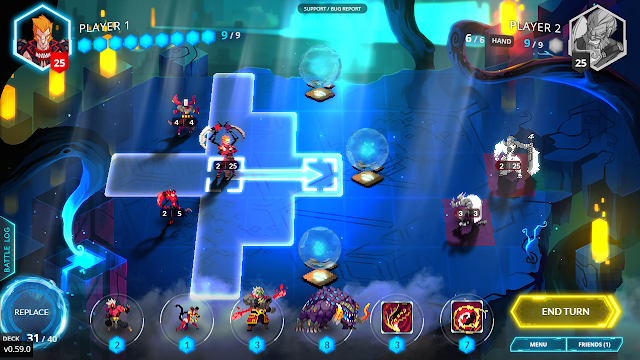 One of the other design choices I appreciated in Duelyst is the draw two cards every turn format. Once you build up enough mana to cast smaller spells quickly, having two new cards is really helpful. Additionally, you can recycle or trade one of your cards for another in your draw pile if you want. This makes it hard to truly have a terrible, game ruining opening hand. Also because mana is managed through natural flow of time and now part of the actual card drawing process, you can avoid the common fate in Magic: The Gathering that most players affectionately refer to as being ‘mana screwed’.

Just like Magic or Hearthstone, finding balance not only in casting cost but also types of cards used is key. One of the more interesting mechanics is the summoning process, which is anchored to units of yours already on the field of play as you have to summon your creature to an adjacent square. Since proximity is so important with monsters for their movement and attacks, you find some players creating walls of meat shields. It might be tempting to try and bypass these with select spells, and you can absolutely use the right spell at the perfect time to tip the scales to your advantage, but be careful not to rely on any one type of card or style too heavily or you may find that you have been so busy casting spells that you have forgotten to build up your own physical defences and put your primary character in a vulnerable position.

Deck creation was intuitive and I enjoyed creating themes for my decks (I still have well over fifty Magic: The Gathering decks squirrelled away in my den, so one could safely argue that deck construction is my favourite aspect of this genre). Now I did find myself wishing for even more cards, but the team so far has shown a willingness to update pretty frequently, so I suspect more will be coming along sooner than later. 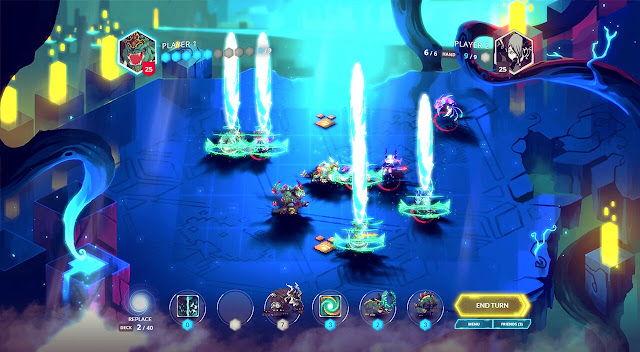 Related reading: On consoles, Yu-Gi-Oh is still going strong. Matt’s review of the PlayStation 4 edition of the franchise.

For a game that should not be pushing too many limits technologically, I did get some odd graphical slowdown at times. This coupled with a visual style that might not appeal to everyone, Duelyst is not without some faults. While I was able to earn packs of orbs/cards more quickly in this title than several similar games, there is still some grinding to be done both online and in the offline challenge modes if you want enough coins to make purchases with. Games generally conclude in about ten minutes or so, which to me is a good and brisk pace. That being said, moving the units around does slow the game up compared to some purely card driven titles, so that too could be a concern for some players. Seeing as the game is free to play however, if you have any interest in the genre at all, there is no reason not to give Duelyst a try and see if its distinctive stylings suit you or not.

On games as a platform for propaganda