Episode five. It’s been an interesting trek to get here, to what should be the end of Minecraft Story Mode. As episode four ended, I wondered what could possibly come in episode five because the story was all wrapped up into a neat little bow. Months passed with no word on the episode. I felt like I was the only one demanding to know what was going on.

Then the moment happened: three months after episode four was released, Telltale finally announced episode five’s launch date. It was happening. It wasn’t forgotten. But wait — what’s that? Episode five is really just a bridge between the “actual” season and three new “post” season episodes that feature an entirely new story? What on earth are you doing, Telltale? You can’t say a season will last five episodes at the beginning, but then say oh hey, it’s really just four episodes and then this bonus piece of crap to link you to another story.

Related reading: Go back to the beginning of the series with my review of Episode 1.

I’ve been wavering on Minecraft Story Mode as a whole. The story is sometimes funny and the ways they tie in Minecraft brings a slight smile to my face, but I feel like I’ve been mislead. I was promised a season of episodes — five episodes — that tells a complete story. Instead, what Telltale threw my way was a half-baked four episodes that left me constantly wanting something more. I was stupid to believe the last episode would fill that void, especially after the long and silent wait prior to its release.

Minecraft Story Mode – Episode 5: Order Up! feels out of place with the previous four episodes in the series. The world is no longer in imminent danger, and the story really did end in the fourth episode. So our heroes are now left to explore on their own, seeking fame, danger, and/or treasure. The game opens as we see Jesse running through the woods at night. Danger is around every corner, along with the opening credits (which are rolling remarkably early in this episode when compared to the others). Jesse and her friends reach a gorgeous temple; my reaction to seeing it isn’t to run inside but instead to contemplate how to build it in Minecraft. This happens a lot while playing story mode: I should be focused on what’s going on, but it just makes me yearn to sit at my computer and build in the original Minecraft game.

But I must continue ahead, and so I push ahead. My reason for entering? Not the fame, not the danger… it’s all about the treasure baby. If I’m going to continue playing through Story Mode, there better be loot in it for me. But it turns out choosing treasure over danger or fame has absolutely no impact on anything, leading me right to the one-word phrase I find myself muttering (or yelling) at nearly every turn: why? Why is the game having me make choices for no reason?

There are times I question why a cutscene is split into two, because all you do is walk in a straight line for five seconds between them. Why even pick up the controller? You can’t even look around or go backwards. Just have one cutscene with one second of walking and be over with it. Telltale seems to adore wasting unnecessary time coding its games, because the question of why continued. Out of nowhere this episode, unneeded tips pop up in the corner. When Ivor tells you to look for a lever, you look for a lever. There doesn’t need to be a pop-up hint box that says “look for a lever.” Order Up! (and by proxy, the whole season) feels like a long uninteresting trek instead of an exciting adventure.

By the time I hit the end of the episode, I started wondering why on a more philosophical level. It starts with wondering why Telltale makes the decisions it does, and ends with me wondering why I am still picking up the Xbox controller to play a game that I’ve obviously decided I don’t enjoy. Even if I wasn’t reviewing it, I think I would still trudge through it out of sheer curiosity combined with the hope that it will get better.

Of course, there are moments where Minecraft Story Mode really shines in Order Up! In an episode with no Axel (by far the best character in the series), Ivor steps up to provide comic relief while still being a troublemaker. He flits about excitedly like a hummingbird, and gets incredibly invested in his builds regardless of its impact on others. The best part is when he decides to build a house with lava pouring out of it — smack in the middle of the recently-rebuilt city. Poor Ivor just doesn’t understand why citizens don’t want lava pouring onto the sidewalks.

Actually, the comedic relief is what keeps drawing me back to the game. I have developed an emotional attachment to Jesse, but if I were to never see her in a game again I wouldn’t miss her. Ivor and Axel are the real stars of the series, providing legitimate feedback half the time and otherwise just making everyone laugh through their words and actions. A new character named Milo also adds some dimension to the tale. Unfortunately, other characters fall by the wayside as we slowly forget about Petra and Ellegaard despite their consistent presence through the episode. They are essentially just props there to tie the current story to the overarching tale of the first handful of episodes. 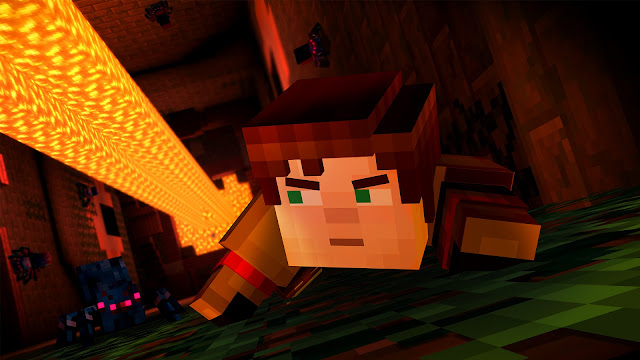 All Minecraft Story Mode succeeds at is make me want to play the original Minecraft and leave the pain of playing Story Mode behind. But I can’t. Why can’t I? Why do I care so much? Because it could have been better. It should have been better. With pleasing aesthetics and a stellar cast, there was no reason for Minecraft Story Mode — as a five-episode package — to not be perfectly charming, witty, and adventurous. I can say with confidence after playing Order Up! that the series as a whole is a giant flop. The series riddled with inconsistencies, even for basic things like number of chapters in an episode. By episode five they still haven’t fixed the annoying flickering backgrounds or wonky camera angles that make it difficult to explore.

Related reading: For a Telltale series we enjoyed a great deal more, check out Nick’s review of Game of Thrones, also available on Xbox One etc.

The writers at Telltale quite obviously ran out of juice after four episodes, leading to this “in between” episode that leaves a bad taste in my mouth. I have one question for anyone involved with the game, a question that will surprise nobody who has read this review: why? There was no reason Story Mode couldn’t be a wonderful extension of the Minecraft world, but instead all it succeeds at is pushing me away. After this experience, my desire to play any other Telltale game has gone from high to non-existent.

Shame on you, Telltale, for ruining such a wonderful thing.