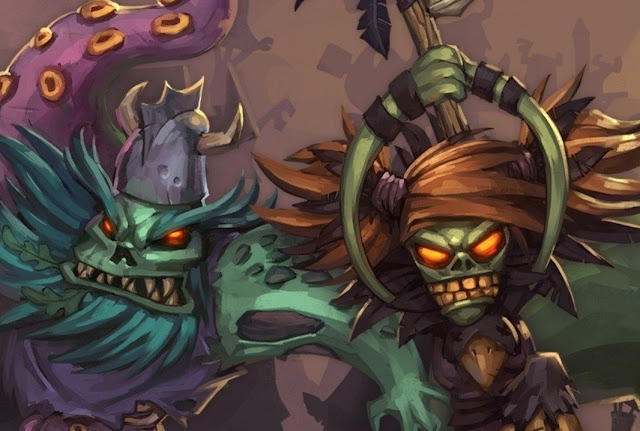 It was another normal day in Valhalla. Odin was pimping out his staff with glitter until Loki walks into the door, accusing Odin of using glitter again. He then goes on a rant asking why they can’t just hang out like family before promptly stealing Odin’s Eye and waltzing out the door. Being now in a very bad mood because Thor doesn’t want to help, Odin instead decides to raise four warriors from the grave as zombies in order to hunt Loki down in this 2D side­scrolling brawler.

From the start there is absolutely nothing serious about Zombie Vikings. That introduction really should have set the tone for you. It is quite clear that silly humour was in the minds of the developers when they set out to make this game, and it more than succeeds in this respect. If anything, the level of humour, both dark and otherwise, only ever stays on the rise as our four “heroes”, as heroic is disfigured zombies can be, traverse the various stages to hunt down their prey. A nice touch to it all is that instead of simply focusing on a single character for the narrative and subsequent events, all four are present as need be, so you don’t need to play the game through four times to experience all of the… wild intricacies… of the story.

Taking the idea of a 2D side­scroller one step further, all character and enemies are themselves presented using a different approach to the 2D aesthetic, which is really quite appealing. Until the first character turns around, all the assets give the appearance of looking 3D until they “flip” around and look in the other direction. This graphical style only aids in the comedic style as nothing looks overly serious – especially with the mouths of most characters not being connected as the head bobs up and down as they talk. 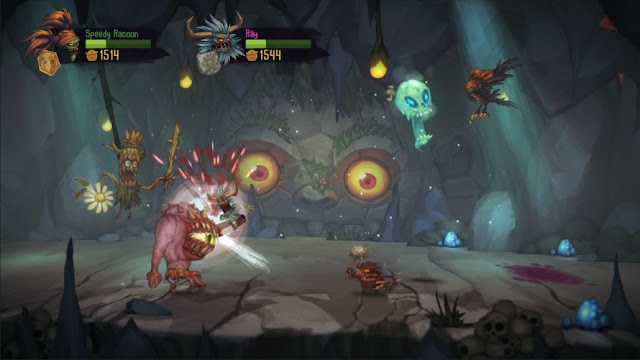 Of course, Zombie Vikings wouldn’t be about “Vikings” if there wasn’t a good deal of roughing and tumbling going around while chasing after the God of Tricks. Not being outdone by the level of care given to the rest of the experience, combat is fluid and versatile with the four provided characters. The basics of each are the same as they run around, throwing and smashing stuff while slashing at enemies and blocking their counter attacks. Each character has a couple of special abilities of their own, and testing the waters with each is recommended as sometimes a stage is all about a character in particular forcing the player to take them regardless of their own wishes. It’s all quite derivative, but it’s well executed and there’s enough variety in there to sustain its combat mechanics, which is, ultimately, what you want to see in a brawler.

Our characters themselves do not level up over the course of the journey. They’ve already been there, done that. Wanting to get things over and done with, they take their individual and combined experiences to wreck havoc on those that stand before them while collecting shiny loot in order to buy better equipment to better smack the things that stand before them. Not all equipment can be bought as some will come to you during the main storyline while other pieces will come as a reward for completing a side quest.

Zombie Vikings is basic brawler, but it’s a basic brawler done right, and is quite funny in the process. And, really, that’s all most people are looking for from this genre. There are far better examples out there of it, but as a Sunday afternoon killer, this one is nonetheless almost as worthy as Thor himself.

On the music of Duet