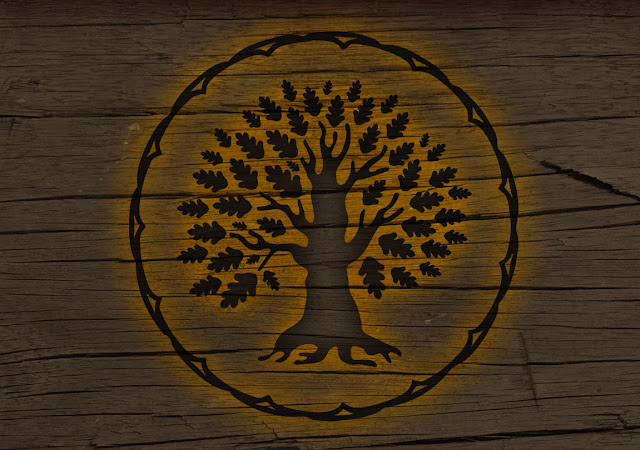 Take everything you know about being a supreme ruler and and huck it out the window. The darkness has come and passed and as a God with limited powers it’s up to you to lead the meager remainder of your people to some semblance of life without letting them die of starvation or from the cold. Thea: The Awakening takes players on a different 4X experience that is based more around survival than exploration and expansion, and is set in a dangerous land that is bad need of the Gods to recover their powers.

Upon starting up, players are offered a choice of two Gods to choose from, with different abilities in order to lead their peoples. The interesting thing about the provided Gods is that like the experience about to be undertaken, different players will have different choices as loading Thea on both my laptop and PC offered me different starting Gods with the rest to be unlocked. While stating that no two playthroughs will be the same is generally more of a fluff statement, Thea takes this one to heart as sometimes even loading a save or an auto-save will change how events play out or even if they occur in the first place which could be a blessing or a curse.

With all of its interesting elements, the core theme of Thea is survival, which is built in a variety of ways, from the food and warmth counters that need to be monitored through to the easy decimation of your townspeople. Unlike a lot of other games in which units can be “built” and deployed thereafter, Thea requires careful thought into what are called Expeditions which are formed by townspeople that are currently available within the settlement. Having to choose whom to send exploring the wilderness to find new sources of materials is not going to be an easy one as any person sent is a person no longer on the work force in order to gather food and resources that are key to keep your settlement alive. To up the stakes of sending a townsperson out with a group is the fact that these people are finite in a sense. Repleshing a townsperson whether they are a Warrior, Crafter, or Builder, is not easy and sometimes takes many moons before new blood will come by to bring into the fold. 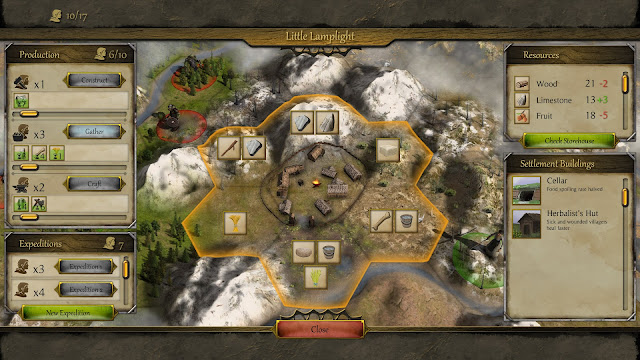 Humans, especially in a fantasy world that features creatures including werewolves and gigantic spider queens, are rather fragile. Out in the wilderness where everything that can kill you rather easily, quantity is just as important as quality. With up to six people that may be sent out together on an adventure it would be wise to send more than simply a group of warriors as support roles like a healer or a silvertongue will more than come in handy; sometimes a simple discussion can allow everyone to leave a potentially deadly situation in one piece. Experimentation with the types of groups is important for more reason than simply its survivability but also for the goal in mind. Not all materials will be within the immediate range of the settlement and a group may need to go camp outside the more protective walls for a limited amount of time in order to collect what is needed for, and this raises the question – just how long can the expedition survive?

Outside and even inside the walls there’s more to worry about than the hordes of wandering monsters. Staying warm while camped out or having enough food to feed your peoples are equally as important and as deadly as taking the wrong actions in battle. Settlements have access to at least the two most important elements such as a food source and burning materials. Luck however will determine how bountiful it is beyond that with materials such as iron, steel, yarn, fruits, and fish for example. From this point forward it is up to your Godly guiding hand to lead your peoples to some measure of prosperity in order to expand to make better tools and weapons for their growth and their protection.

Events add another layer of challenge and strategic depth to the experience. Being absolutely random in their occurrences, events will come up for either the people in the settlement or those currently out on the Expedition. Events range from crossing paths with peoples with dialogue options to having to make a choice during a freak lightning storm as to how to best protect yourselves and prevent the worst case scenarios. With the random nture of these there is no way in order to prepare and even if a save file is loaded up in order to make a different choice or attempt another approach, there’s no guarantee that the event with either happen again or even if one happens at all. 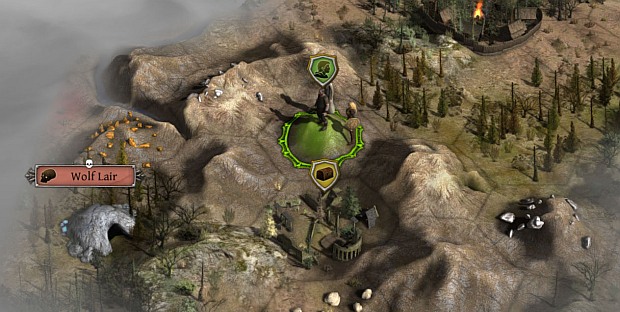 “Battles” fit under a large umbrella that may be more apt to call encounters as fighting isn’t always the only way to victory over a foe. Stealing, trapping, poisoning, as well as plain out stabbing your opponents are possibilities in order to achieve what is needed. Negotiating with a werewolf over the silver deposit he is using to increase his immunity may work out infinitely better than trying to take it by force. By the same logic however, there is an option to wait it out and ambush him when he’s at his weakest. These moments are what will define who you are as a people and exactly what lengths you are willing to go to survive out there.

A card-based system that requires strategy and a bit of luck resolves conflict. Expeditions in particular will have a limit of six cards as one card is the representation of one person. Three make up the front line while the remaining are there for support purposes. “Stacking the deck” is not quite possible as your group in card format are shuffled before the encounter with an option to reshuffle once – which is at times not enough. This is where skill and luck in order to defeat an opponent come into play depending upon the Expedition members’ strengths.

Thea: The Awakening makes for something of a grim, low-power 4X strategy game that works extremely well with its particularities. Proper planning can only take a God so far as adaptability and luck plays a major role with random events that could very well lay waste to everything. While that’s not necessarily always good fun, what it does do remarkably well in building the tense atmosphere that is quite unique for the genre.

Real Racing 3 is on the Apple TV, and I’m a happy fellow about that