Project X Zone is not unlike a crossover fanfiction. It tries to pull in lots of different elements and place them in a singular framework. To that end, the sequel gets more things right than the original game, and the end result is a tactical experience that was hard to put down due to a good mix of mechanics and enjoyable fanservice.

Related reading: You can read Nick’s review of the first entry in the series here.

There is very little I would consider ‘new’ in this game, over what we saw in its predecessor. The original Project X Zone did some neat things with the strategy genre, and by and large the sequel here takes most of its cues from the original. You have turn-based combat that leverages special skills, combination attacks and flanking tactics as you manoeuvre a variety of characters about a grid-based map.

Aspects of the strategy that help to set this title apart from other strategy/RPG hybrids is the way you play defence and the way you string moves together on offence. Your special move points are not just used for flashy offensive strikes, but things like defending and even counter attacking. While on offence, you move about the screen and choose your enemies to attack in turn-based fashion, but there is an element of action/fighting game mechanics at play as you combine the directional pad with button presses in an effort to string together powerful combos and team strikes. You have to develop a sort of rhythm in juggling characters and knowing when to sprinkle in your special moves (especially handy during boss battles). Greater variety and more responsive controls than in the first game take this unique system and make it even more enjoyable than before. 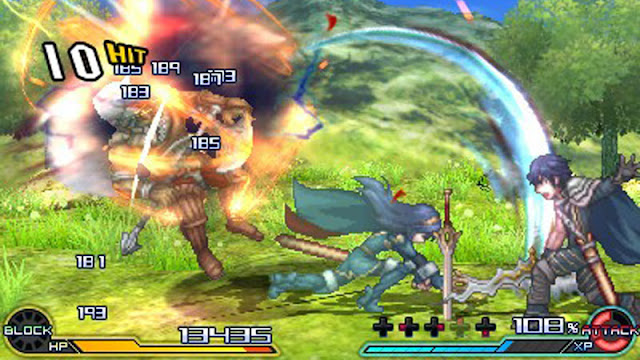 While these elements work quite well, I have to admit that there were times I wish the progression system for my characters offered better flexibility. While the on-screen animations might look a little different from one character to another, you really never get an option to truly customise your characters and that can leave you with a sense of ‘sameness’ after a while. The character development is certainly better than the first game, but there is also still ample room for improvement. I like the way that the companion or team-up system works and some of the combinations of characters certainly work better than others, but at the same time Project X Zone 2 never quite reaches the tactical depth and development of series such as Disgaea or Fire Emblem.

The reason I referenced fanfiction in the opening paragraph is due to the very nature of the game. Literally thousands of pages of fanfiction are written each day where people come up with their dream crossovers, mixing together movies and shows like Supernatural with Harry Potter. Even Hollywood is susceptible to this trend with movies such as Freddy versus Jason, King Kong versus Godzilla and Alien versus Predator. There is a back story in place about rifts that open up and link worlds, and a secret force (called Shinra) that helps to deal with the evil that spews forth. While you do not have to play the first game to understand what is happening here, it certainly does not hurt to as there are several nice nods to the original title’s story here and there. However, the mysterious gold chains that show up in these different gaming universes are simply a means to an end. The goal here is to mash together characters from all sorts of popular franchises ranging from fights such as Tekken, Street Fighter and Vitua Fighter and games of a completely different nature such as Devil May Cry or Resident Evil. And, well, the way the stories are brought together is as contrived as you find in most fanfiction you might read (take my word for it – don’t read most fanfiction).

Having played most (but not all) of the titles thrown into this virtual stew, I loved seeing some of my favourite characters show up. This sort of alternate reality crossover is the sort of thing that fanfiction is often built on, and it generally works quite well here. The actual story never takes itself overly seriously, and that is for the best. Quip-laden dialogue and some genuinely funny combinations of characters really help to advance an otherwise ordinary story line. Where things sometimes fall a bit short of the mark is when you have so many characters crammed into a scene that you cannot help but feel as though some of them are just being relegated to the back lines when they are given little or nothing to say and do except stand around and wait for the next battle. By default I was more attached to characters from games I was familiar with than those titles I have never played, and because the characterisation can get a little thin due to the sheer number of characters and franchises involved, I came away with little emotional investment in the characters I was not already familiar with. There is an assumption by the developers that you will be familiar with most or all of the characters, because so little time is actually spent building them up over the span of the game. The other thing that may be a slight bummer is the cooperative nature of the fighter. Remember those three movies I mentioned earlier? They had something in common with one another – which was playing some popular characters against one another. Games like Street Fighter X Tekken allow you to pit franchise favourites against one another in combat. Here the characters are fighting with one another, creating dream teams instead of dream match-ups. It just doesn’t have the same dramatic impact. Thankfully the banter between characters is often so good I did not mind. If I cannot have some of my franchise favourites actually fighting it out, some verbal sparring helps to alleviate that disappointment.

Related reading: Smash Bros. is, of course, the ultimate character match-up. Matt’s full review of the Wii U release.

The presentation is generally excellent. If you like using the three dimensional effect on your 3DS, know that the game does a really nice job of layering the text boxes (which are plentiful) against the character portraits. In combat the layers look quite nice as well, especially when they flash that X screen overlay at the end of the battle. Character portraits look nice and sharp, though the actual map screens where characters move around are lesser quality and the backdrops in battle are pretty pedestrian as well. The music is absolutely awesome, with numerous immediately recognisable (if often remixed) tracks from classic games. They just picked away at my nostalgia in many of the scenes with the music alone, let alone the characters.

I look at Project X Zone 2 as a huge piece of fanservice that offers a nice mix of simple action and tactics with an outstanding cast of characters. Blending of great music and some fun visual effects also help to offset what is a somewhat disappointing story, with minimal character development (both mechanically and in the narrative). It was easy to drop a few dozen hours into this game, because I enjoyed the combat and looked forward to the next inevitable character introduction. If you enjoyed the original title, then Project X Zone 2 should appeal because it does everything the first title did but better. If you are new to the series but a fan of some of the various franchises represented here, it is also worth a look.

Interview: On making games in Iran