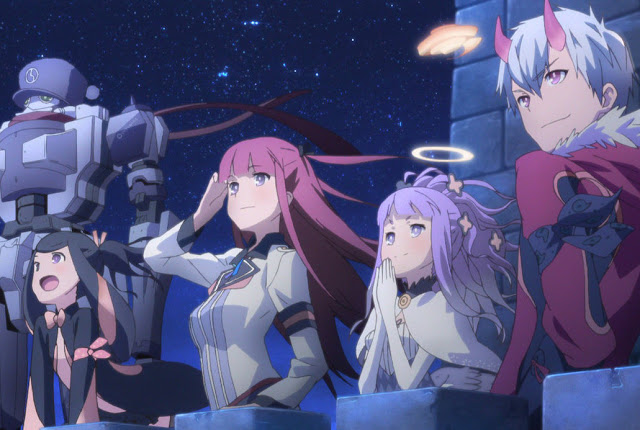 Summon Night 5 is a strategy JRPG and part visual novel, released for the PSP, but also playable on the PlayStation Vita. It’s not going to revolutionise the genre, but it is, nevertheless, a very fine example of it.

At the start of the game, you can pick to play as one of two characters, Arca or Folth. I played mostly as Folth in this review, but I did try out Arca to see if there were any significant differences. It seemed that the two character arcs were pretty much the same aside from their genders, but I say that with the disclaimer that I didn’t play very far with her.

Very early in the game, you will be saved by a Cross; a creature that that will become your summon. The Cross you get depends on what item you give it as a reward for saving you early on in the game. The story plays out very much in the tradition of the visual novel, and that does mean there is an awful lot of reading to do. As with any visual novel, how good that experience is depends greatly on the quality of the writing luckily the story here is well written. I should clarify; the ideas behind the story are strong. The text itself is riddled with the occasional typo and grammatical mistake, but while that’s never a good look for a visual novel, it’s infrequent enough here to be forgivable. After meeting his or her Cross, the player’s character will go off to become a summoner of the Eucross. The Eucross is an order who keeps the peace among the different types of entities from different dimensions who all live in the mostly peaceful city of Savorle. To advance the story along the player will travel around a big map in order to find specific people to talk to. After doing this, you will come to an ‘event’ – and that means combat. 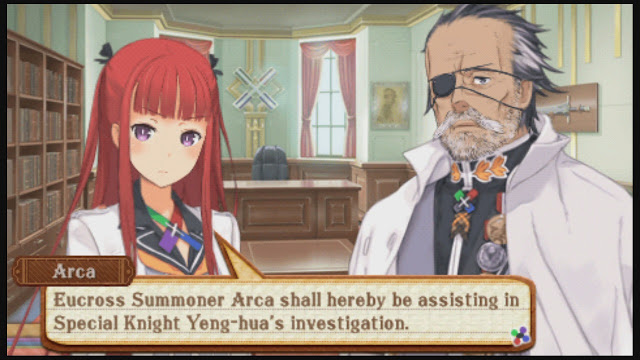 The battles are turn based, meaning you get to move all of your characters and use actions and then end your turn and your enemies will do the same. We’ve been playing these kinds of games as long as games have been around, really, from Shining Force and Fire Emblem through to Final Fantasy Tactics and more recent stuff like Disgaea 5. It never gets old. There’s a couple of uncommon twists to the formula, however, to help keep veterans interested. There is a particular resource that needs to be monitored, called “BP”. BP are points you can win or lose in battles; you can win them by defeating certain enemies and lose it by losing one of your units or by killing an enemies unit that is weaker than yours. This system forces you to approach battles in a slightly different manner to which you might be accustomed to.

Additionally, in a battle (or even before it starts) you can set your characters to either counterattack or defend. Counterattack allows a retaliatory strike on an enemy that attacked them but they will still lose the same amount of HP. The defend command, meanwhile, means a character will take less damage, but will not be able to attack back. After winning a battle, you will get materials such as iron and, of course, you will get experience points and money. The materials you get can be used to strengthen the army’s weapons but it will also cost money. The experience you get can be used to level up or to acquire new skills. Now, instead of your characters earning experience and leveling up themselves you accumulate a pool of experience that you need to distribute. Each time you level up you will be given three skill points to strengthen certain aspects of your characters. I’m not such a fan of this system, though that might be more a result of being so familiar with more traditional experience systems; I do prefer watching my character become more powerful as a direct consequence of their actions.

The overall difficulty of the game I found to be a little challenging, though it’s the kind of game that would have been far less frustrating if it was explained to players better. At first, I kept dying in one of the first battles and the tutorials didn’t help much; I wasn’t even aware of how the levelling system worked at first! Then again, this is the kind of game that will only ever appeal to genre veterans, so I don’t think the developers were too concerned with explaining the ins and outs of the system. 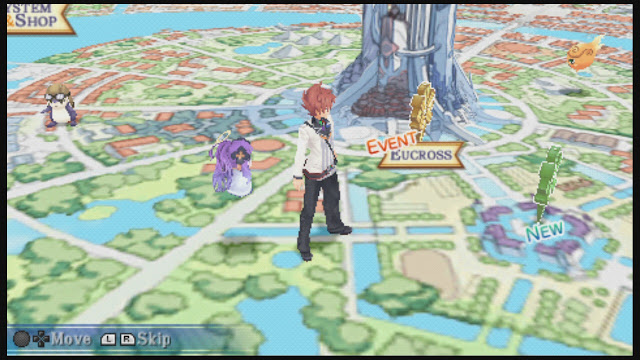 The game plays out in chapters and at times after a chapter you may spend time with a character you want to get to know better and in doing so will raise his or her affinity level towards you. These affinity levels will have an outcome on what ending you may get and some of the dialogs may also change. What character you play as and what cross you get may also change the ending you will get. All standard stuff, and while the quality of the characterisation isn’t up with the likes of Persona or Fire Emblem, it gets the job done. I certainly have my favourite characters, and found myself connecting with their individual stories quite closely.

The game looks darn good for a PSP title. The anime aesthetic is gorgeous and as you play you will unlock pictures in a gallery. The battle animations are also good. There is no voice over in this game in fitting with its budget nature, but I’d prefer reading to listening to cheap voice actors in niche projects such as this anyway.

Honestly, I didn’t think I would like this at first but the game soon grabbed me and pulled me into a wonderful story and well thought out characters. There is replay value for anyone who wants to unlock all the endings or all the content in the gallery which has images, music, and unlocked endings. Summon Night 5 stands up to be a really good SJRPG that fans of the genre should really enjoy. And hey, if you’re one of the few people still playing a PSP and haven’t upgraded to a Vita yet then you have a new game to play in 2016. That’s quaint all by itself.

Interested in also playing this series on the Nintendo DS? Check out this title from Amazon:
Share this