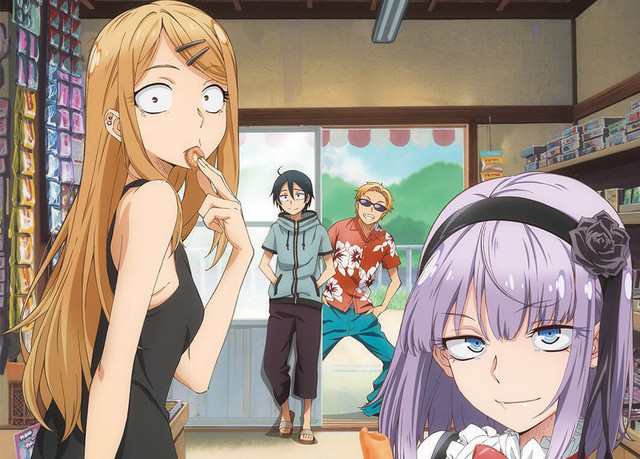 When a comedy show spans just a dozen episodes, its setting can dictate its identity just as much as the actual gags and satire behind it. Modern anime turns to academic locales so routinely that every season brings a handful of shows set in this same backdrop. The overexposure is logically sound; school life resonates strongly with anime’s demographics and leaning on tradition can mean one less component to worry about when the aim is to highlight characters or a spread a message. Of course, this also means long time viewers look upon standard settings with jaded eyes.

Dagashi Kashi, meanwhile, is immediately as tempting as a chocolate bar by a grocery store checkout; its location alone proves its raison d’être. The show takes place in an obscure candy shop out in the boondocks and this thematic use of candy works wonders in creating a unique atmosphere.
Protagonist Kokonotsu Shikada (yes, his given name is basically “coconuts”) carries a burning passion to become a professional manga artist, but his old man isn’t as optimistic about his son’s career choice. Rather, the elder Shikada wants him to be the next heir to the family candy business. Along comes Hotaru Shidare, the daughter of an esteemed sweets company owner, to recruit Kokonotsu’s father. Mr. Shikada agrees to work alongside her, but only if she can convince Kokonotsu to take reigns of their humble sweetshop in his stead. 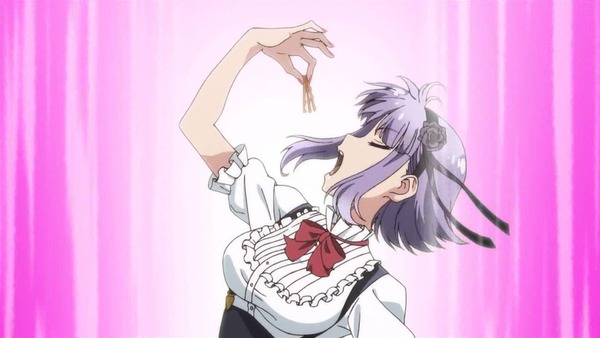 Of course, the would-be owner of the generations old establishment hardly seems to be guaranteed financial security. The serene rice fields and scant few passersby in rural Japan directly juxtapose the raving lunacy that every character besides Kokonotsu exudes every minute. My earlier description of Kokonotsu’s father might have led some to conclude he’s the classically strict, traditionalist authority figure that serves as a foil to the comparatively modernised aspirations of his offspring, but that couldn’t be further from the truth. Besides that singular desire for his son’s future, he basically frolics and prances around the neighbourhood whilst manifesting props from thin air and affectionately lunging at his son.
Even the lead character’s potential love interests are bonkers to the point of attacking him for his polite, noncommittal remarks. Kokonotsu isn’t terribly moving as a lead yet, but his role as the comedic straight man allows the rest of the cast’s antics to shine elegantly. The most mundane conversations colourfully burst to life as characters dish out puns, non sequiturs, and absurdist dialogue ad nauseam. To use a western example, I at times felt shades of Sponge Bob SquarePants (albeit with more…striking character designs).
Of course, there’s plenty else going on beyond the setting. Chiefly, the show offers insight about the state of the Japanese sweets industry. It’s not as informative as, say, Seiyuu’s Life was about its central theme, but what would labelled borderline advertisements for real-world products has minor educational significance for those outside the core Japanese demographic. I can’t imagine western viewers getting up in arms given the enlightening information and how cleverly products are worked into the script. 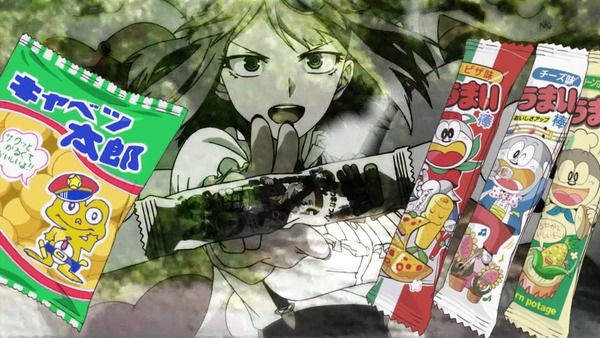 The character designs in particular are positively entrancing thanks to their distinctive eyes. Males and females alike have an almost lusty gaze to their standard expression that certainly befits the look you’d have living in close quarters to sugary diabetes magnets. Even if the rest of the show were to bomb from here, I still see it garnering success in terms of figure sales and the like because everyone’s such a looker.
Dagashi Kashi’s understated little candy shop provides the basis for the show’s entire brand of comedy. The resulting relaxed but hyper-caffeinated vibe is a special one indeed and I hope it can be maintained going forward.

On King’s Quest – Episode 2: Rubble Without a Cause: Life is filled with difficult choices