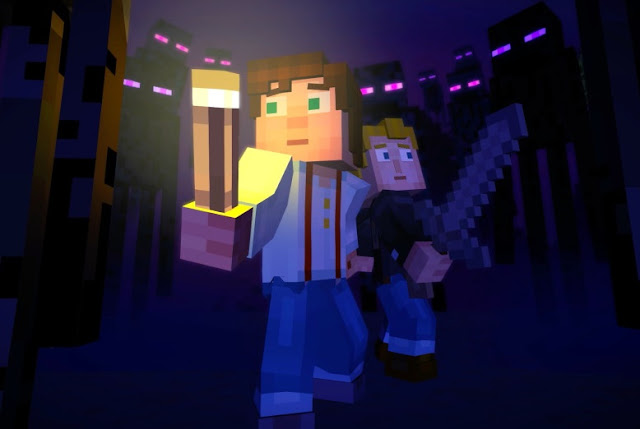 After Minecraft Story Mode – Episode 2: Assembly Required, I was left with a bitter taste in my mouth. The episode was half the length of the first and contained a plot hole I could not look past. I look at Episode 3: The Last Place You Look as the measure of the series (season?) as a whole: it’s the halfway point, and the game should really be hitting its stride. So the real question is… did it?

Related reading: Go back to the beginning with my review of the first episode of Minecraft Story Mode.

Episode 3, of course, starts off where Episode 2 ended. Our heroic team find themselves underground with a massive grinder. This is something I adore about Minecraft Story Mode: the inclusion of terms coined and/or used by players from the ‘real’ game. Unless you’re a fan of Minecraft, you might not know what a ‘grinder’ refers to, but I love that Minecraft Story Mode is comfortable with that. Last episode, there were grievers; in this episode, the grinder. (Incidentally a grinder in Minecraft speak is a machine made to spit out a continuous stream of something, such as monsters. The purpose is usually to stand at the end at defeat them, gaining items and XP. In Minecraft Story Mode the grinder is essentially background, but a very welcome touch).

The beginning credits are something to look forward to in Story Mode. For this episode, there are a lot of monsters (including exploding creepers). The entire scene is playable instead of static. After the credits, it is back to trying to find Sauron with the help of Jesse’s ragtag team comprising of friends and members of the Order. Axel is essentially one gag after the other, and brings a lot of lightness to a game that could otherwise me quite dark (after all, the world is being destroyed). The banter between characters often reflects my own somewhat sarcastic thoughts, which makes me enjoy the game that much more.

The graphics and sounds are, as always, good but not fantastic. I noticed fewer graphical bugs, so that was nice. The sound of spider enemies legitimately made my skin crawl, but for some reason the spiders were abnormally small when compared to Minecraft’s scaling.

Related reading: And check out Nick’s review of the actual Minecraft game.

If there is one thing that really stands out about this episode, it is the final chapter. At one point it felt like the ending of the entire season, and I couldn’t imagine where things could go from there. Luckily, Telltale had somewhat of an idea, and it is clear there is so much more story left. Also at the end of the episode, a decision made in-game suddenly became incredibly important and will have a long-lasting impact on how the remainder of the series is played out.

So did the third episode of Minecraft Story Mode set a good precedent for the remainder of the series? Absolutely. Did it clear the bad taste left behind by episode two? Absolutely not. It makes me hopeful for episodes four and five to continue the upswing, but I’m hesitant to believe it will.