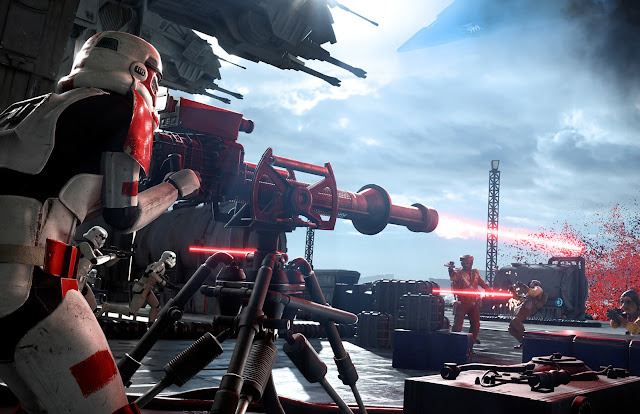 Star Wars is a household brand, one that is almost 40 years old, and though it has had a checkered history with videogames that make use of the franchise, they tend to have plenty of support behind them. For this latest one, EA Games have brought in a powerhouse in the first person shooter genre, DICE, and the good news is that it is a very authentic Star Wars game. Sadly, in sticking so closely to the source material, the people at EA and DICE have shot themselves in the foot. Star Wars isn’t a war film, it’s a western. The FPS genre is not, in fact, a good fit for it. Star Wars is meant to be about a hero journeying across vast landscapes (or space in this case), and encountering moral challenges and the occasional gunslinging duel with another key ranger-type. Star Wars Battlefront, in its efforts to shove that particular square peg into the circle-shaped FPS genre, doesn’t gel particularly well.

Star Wars Battlefront is first and foremost a multiplayer game. The very few solo offerings (which are playable in split-screen co-op for those that still value couch gaming) don’t actually try to capture the storylines or characters that we know so well. We’re given rebel grunts to play with, who mean nothing to us. The missions that are available act as tutorials, letting players learn how to control most of the vehicles in the game and general shooting mechanics, but the game makes no potential of its meticulous environments to tell some kind of meaningful story or provide context to the experience. There is also a wave mode which is quite a lot of fun in co-op, mainly due to the challenging nature of it.

By far the standout performer of Battlefront is Walker Assault; a mode which recreates the famous Battle of Hoth where the Imperial AT-AT walkers are slowly marching towards an energy shield the rebels are hiding behind. In the game, Walker Assault is playable on all four planets (yes, that’s how much diversity we have here), and they each bring different playstyles with them. Tatooine, Hoth and Sullest all are very similar, with the biggest difference being the layout of the map and the path the two AT-ATs follow. The most interesting map though is Endor, where nearly all vehicles are removed and there is only one AT-AT marching towards a rebel transport ship. It’s enough of a change to make the mode feel fresh every time the map is played without feeling to separate from other planets. 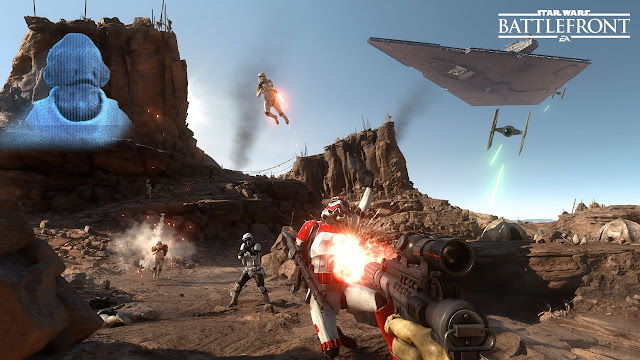 All the other modes are standard run-of-the-mill shooter staples; team deathmatch, capturing control points, capture the flag, a king of the hill style mode where you have to defend falling escape pods. It’s all been there done that, and a little bit boring. We were promised spectacular dogfights in the Fighter Squadron mode but we’re left with a mode that has very little life span. Every game is the same. Unlike the other modes where players can really determine the outcome of the games, this mode is scripted, no doubt a feeling that is generated from the 20 AI on the field (with 20 players in the battle too). The two hero ships fly in early in the match and are almost too powerful to take out, while each team is forced to attack and defend their transports as they fly across the map. It’s fun for a little bit, as the dogfighting is recreated brilliantly, but past that initial fun, I found myself returning back to Walker Assault each time.

By far the best thing about Battlefront is how much it feels like I’m in a Star Wars game. The sounds of the laser fire, TIE Fighters and X-Wings flying above while the mechanical stomps of an AT-ST are behind me put me into this wonderful world that I never want to leave. With lasers being shot everywhere too, there’s a manic beauty to these battlefields. And it’s a beauty that you’ll most likely enjoy from the respawn screen, as you’re going to die a lot. Regardless of the weapon’s damage, it takes a few hits to knock you out. There also doesn’t feel like distance is a factor in these weapons, as you could get shot from the other end of the map. Maybe that’s how lasers work in the Star Wars universe, but doesn’t do a great job as a FPS mechanic. Another strange design choice is the implementation of power ups. These power ups are dotted through the map and they can range from a very powerful grenade, to airships, through to controlling one of the heroes of the Rebels or the Empire. Rather than being a reward for performing well, anyone that runs over it picks it up, and in many cases players are distracted by the promise of a fancy upgrade rather than coming together to work as a team.

What frustrates me the most about Battlefront, is it is one of the simplest shooters I can recall playing. The fundamentals themselves are very basic, as weapons are simplified and not as complex in function as most other FPS’, so are the extra abilities known as star cards which offer players grenades and perks as they’re playing. Progression is limited in kind. The only reasoning that I can think of behind this move is to capture as many players as possible. And teamwork is also limited for the most part. There have been so many times where it would have been much easier to direct players to an objective, or to a group of players, but it’s very isolated unless you’re playing with friends. 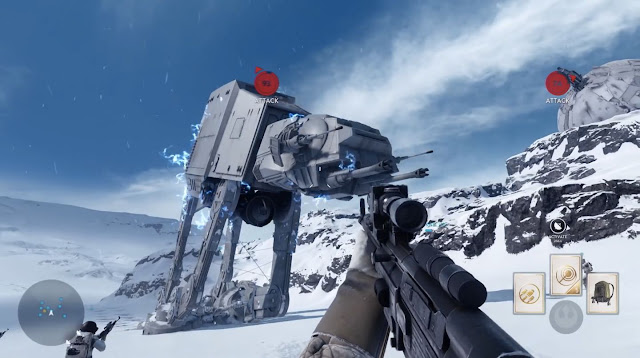 It’s also really important to talk about content. EA has released Star Wars with the plan of four more DLC packs to come in the future. It has have also announced at least one free planet, which will bring two maps to the game in the first week of December, but I can’t shake the feeling that the base package is a shell of a game. The modes are finished, they don’t need tweaking. In fact, the developers seemed to have learnt quite a bit from their massive beta and those improvements have been welcomed. But as I was playing with my friend, he commented that he’s only had the game for a day and he feels like he’s done everything. And I can’t help but feel the same. It would have been nice to have any form of classes to change the play style, or incorporate more heroes, vehicles, and planets.

Star Wars Battlefront is fun, but it doesn’t take long for that fun to be reduced to monotony. Spawn, shoot, die, repeat. It would have also been nice to have a stronger offline component to the game. Even if it was something as simple as battling against bots in the different modes available. Maybe something along those lines will be included in one of the upcoming four DLC packs, so we’ll have to wait and see what EA does with this game over the next year. In the end, it’s a good game for Star Wars enthusiasts, but it still has lots to work on if it wants to stand up at the pinnacle of first-person shooters.

How awesome would a Star Wars Musou game be?