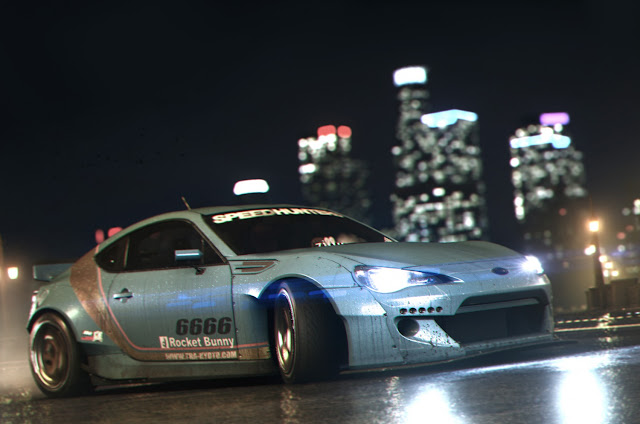 On Halloween night, I was driving alone, in the dark and on a rain swept highway. An endless night, as if the city had been struck down by an evil curse. Alas as I sped around a corner, pulling the handbrake to create a nice drift, I saw a glimmer of hope in the distance, the sun, its light passing through the faraway trees, only for it to then glitch back to the darkness of midnight.

Related reading: Matt’s review of Need for Speed: Rivals from 2013.

Need for Speed has been giving thrill seekers high speed adrenaline rushes for over twenty years now, and naturally, the best way to keep a successful series going is to reboot it. Electronic Arts have stripped back Need for Speed to the fundamentals with this latest game, creating something that showcases these beautiful beasts of the road. The speed and elegance of these vehicles is almost poetry in motion, and while Need for Speed has done its best to represent car culture in its best light, much like the rest of the game, everything else cast in an eternal shadow.

For those that might be wondering, my knowledge of cars starts in knowing where the petrol goes in, and ends at having the number of my mechanic in my phone. I don’t even know how to change a tire (and considering I got a very bad flat last week that’s something that I need to work on). So I thought I would approach Need for Speed the way I do with my own car. I wouldn’t drive a Mustang, I am a Honda Civic kinda guy. I painted it teal, with light blue rims on my wheels. It was a thing of beauty, and due to the game having no player characters (only a generic male dudebro rev head), my car was my avatar. Please welcome Teal Ambition. 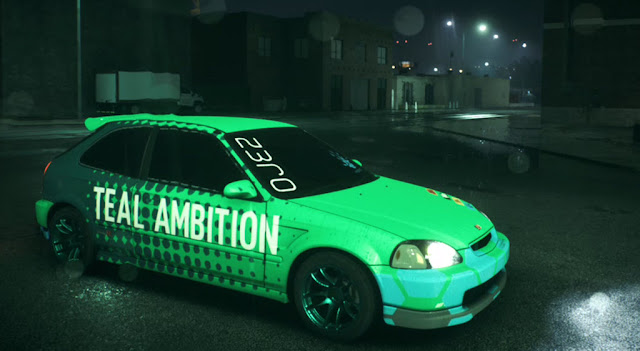 The best thing about Need for Speed is as the cars are the most important part of the game, they are customisable down to every little detail, even to things I didn’t know existed in cars. Of course, many of these customisable options are locked away behind money and rank walls, so to be the fastest driver, you have to be the best. The overworld that your drive on initially seems large enough, but with my first car reaching speeds of over 200km/h, this world very quickly dwindles down in size, and it doesn’t help that the endless night hides away nearly any detail that would differentiate the different communities in Ventura Bay, and every road feels the same.

This issue extends into the missions, which make up most of the gameplay. Each main story mission is divided into five different areas that the game focuses on Speed, Build, Style, Crew and Outlaw. While the missions are divided by this progression paths, they’re all reduced to a some form of race. As all of the racing is done in the same world, the roads that you drive on to get to a mission might be the very same you’re racing on. The races themselves are fine, rubber banding AI, while a nuisance, is manageable, but over time there’s a lack of diversity in the streets that will really start to wear you down.

The way that EA has decided to present the Need for Speed narrative is interesting, to say the least. First of all, “narrative” is a very loose term in describing what we’re doing here, but the general idea is that you’re gunning to be the next iconic driver in Ventura Bay. Need for Speed has done what nobody has asked for and re-introduced live action cutscenes. The characters themselves are interesting and the actors do the best job with the script that they were given, but these scenes are shot poorly and just don’t work. 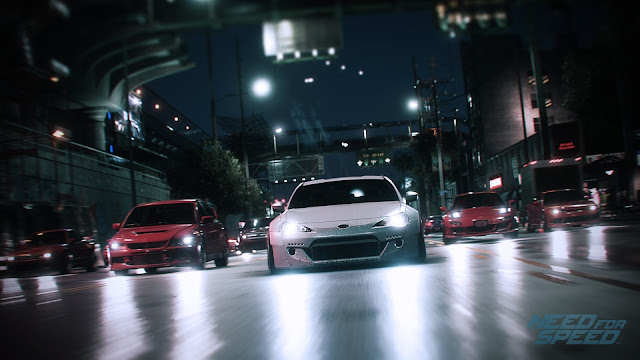 Considering that I spent my entire time with Need for Speed inside Teal Ambition, it is good to see that driving has had a lot of work put into it and it feels great. Every car has its own nuances that slightly changes how it handles or drifts and what’s great about starting off with a basic car is the game gives you time to learn how to drive at 200km/h and take a tight corner without crashing spectacularly. The cars also look stunning, and are a marvel to gaze at when you’re both in the garage tinkering or speeding down a highway. The car is always in full focus and every little detail is noticeable. The same cannot be said for the rest of Ventura Bay. It’s very poor in comparison, to the point where it’s quite clear the developers relied on the high speed and neon lights to conceal just how limited the environmental work is. This is a racing game and so I’m not running home to tell my friends how great a few buildings looked, but it should have been better than this.

Related reading: If serious racing games is more your thing, then Project Cars is where it’s at. Matt’s full review.

I also have a really big issue with how missions are delivered to the player. Every time someone in your crew wants to invite you to race them, or compete against their best friend, they call you to get you to come find them. Then they call you again, just to see how irritating they can be. There was even one moment where I was racing someone, and I got a phone call mid-race suggesting I race them. The frustration of hearing the vibration sound to notify me I was getting a call made me turn my phone off (which is a good thing to do while driving anyway). But there is no way of switching off and getting those irritations away, because the game wants you to always be on the grid, like how it always wants to be online. There is no offline play as EA wants you to always be connected to its servers. Online play means that there will always be other players in your world, who are driving along doing their own thing. You can challenge them to races, or you can have people race with you in missions. AI play is available, where these races are simply replaced with AI counterparts. The “offline” world also lacks from any lively activity, as there are few cars on the road.

What Need for Speed has done spectacularly is put the focus on the car. In every opportunity possible the game showcases these machines, almost fetishising them. And that’s great, but in achieving this, Need for Speed has left behind what makes players stay for these games. Not matter how great my car is, if I’m not driving down interesting streets, or being able to compete in diverse challenges, then slowly the thrill of the car will fade.