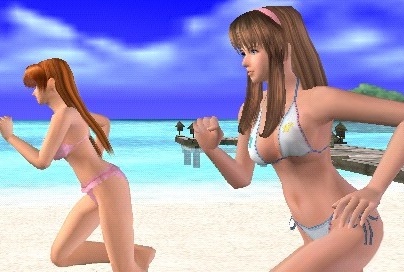 With the controversy that has erupted around Dead or Alive Xtreme 3 this week (specifically, the fallout from the announcement that it would not be released out west), I felt it was also a good time to look at one of its predecessors, to try and unpack why the series might be so contentious. And so, here’s a look at Dead or Alive: Paradise; the one Dead or Alive Volleyball game still available on current consoles, by virtue of it being a PlayStation Portable game you can stick on your Vita.

Related reading: Matt’s in-depth review of Dead or Alive 5: Last Round, on the PlayStation 4.

The most obvious thing about Dead or Alive Paradise is that you’re playing it for the girls. The scenario is that each of the Dead or Alive’s lovely ladies has come to a tropical island, completely devoid of men (aside from Zach, the owner, who is not present outside of the cut scenes). As a tropical island, rest and relaxation is the only real objective, with a gorgeous pool to lounge beside, pristine beaches to sunbathe on, and a volleyball court set up for some fun and exercise. In the evenings, there’s a casino on the island, too, allowing you to play some poker and blackjack for cash.

That cash is important, because you use it to buy gifts and swimwear for the girls. At the start of the game you get to pick your favourite lady (the only right answer is Kokoro), and follow her around as she conducts her daily routine of relaxation followed by more relaxation. She’ll also have a buddy that she will team up with on the volleyball court, and the most complex the game gets in having to maintain the relationship between the two (by figuring out what gifts they like, and buying those gifts for them). 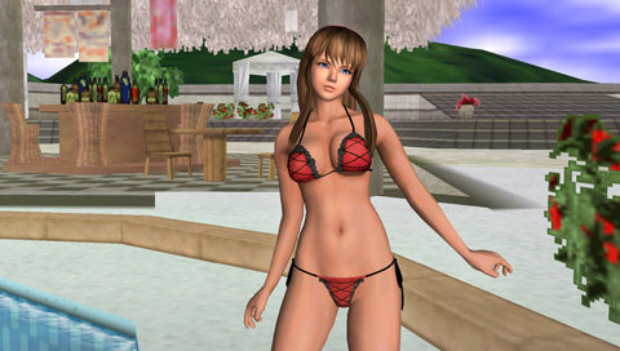 The volleyball minigame is entertaining, though exceedingly simple, and Dead or Alive Paradise certainly should not be mistaken for a volleyball game. There’s also a pool hopping minigame, where you’ll need to press corresponding buttons to have your girl jump from one platform to the next, and do that more quickly than her opponent. It’s the third minigame that is the contentious one; it’s possible to take the girl to one of the locations on the island, and photograph her rolling around in the sand, or swimming through the water, swimsuit fashion style.

This is obviously voyeuristic in the extreme. The idea of having exclusive access to all these girls, who are quite happy to pose for you in swimsuits of ever-decreasing size as you can afford them (amusingly, the more material, the cheaper the swimsuit), is the very definition of objectification. It’s a game with which the male gaze becomes the core thematic and mechanic feature, and where I believe that the main Dead or Alive games builds satire through its design to offer a more robust discussion around the use of sex and sexuality in games, I don’t have that same belief with Paradise, or the other beach volleyball sub-series. It’s titillation, and it’s comfortable with being that.

Of course, I enjoy Paradise an awful lot despite (or perhaps because of) that. An awful lot. It’s a game that is built very much in the tradition of the pin-up, and given that we manage to re-assess most pinup art decades later as works of art (for example: Playboy, especially the early Playboy, is more chic than seedy these days, to the point of being hipster), I see no reason that I should not jump the gun and highlight this series as artful in the same sense of the pinup. Beyond the art, it’s also the kind of light-hearted, light entertainment that I can pick up and enjoy between “real” games. It’s sexy, and it has characters I like. It’s casual entertainment. It’s Angry Birds meets one of those non-nude lad’s magazines that don’t actually exist any more. And even given the very low visual quality of the PlayStation Portable games (by today’s standards), Paradise looks great. 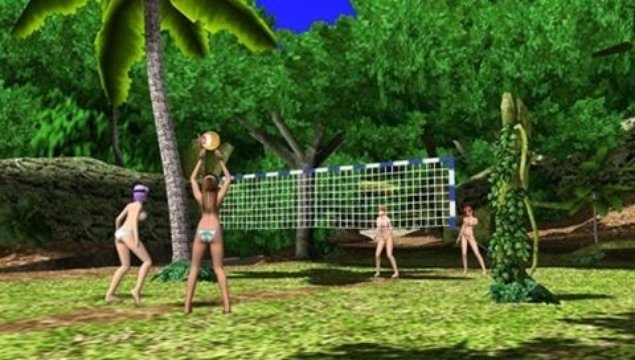 Created before the series’ current director, Yosuke Hayashi, really took over the direction of Dead or Alive, Paradise’s characters have that plastic mannequin design that so was so characteristic (and since been replaced with a much more realistic art style). I love them. The plastic physiques means each character a hyper-real, hyper-idealised take on the female form, and coupled with the ridiculous physics of the busts, means that it’s hard to take Paradise too seriously, even as a work of objectification.

Related reading: An interview with Yosuke Hayashi on Dead or Alive and other things.

And perhaps that is where you can find a touch of commentary in there. These ridiculously idealised characters are, simply by existing, a running commentary on the concept of beauty in the human form, and something of a dig on just how ridiculous that ideal of beauty can be when pushed far enough (i.e. what we see happen in pinup art). It is, in fact, one of the reasons I remain a little sceptical of the new direction of the Dead or Alive franchise, and certainly Dead or Alive Xtreme 3; those plastic mannequin designs added some thematic depth to the series, flimsy as that might sound to some. Swapping them out for the more realistic models put the games in danger of being taken seriously in the process.

But in Paradise they’re gorgeous and really help carry the game. It’s something of a guilty pleasure, though I don’t actually feel any more guilty enjoying this game than a fan of shooters feels guilty for enjoying Destiny. It’s a game I have kept on the PlayStation Vita memory card as long as I’ve had a Vita; it takes up a lot of space for a PSP game at over 500MBs, but it’s a game I keep coming back to for short bursts when I’m not in the mood to play something lengthy, serious, or meaningful. It’s fun.

Are you a fan of the Dead or Alive series – both fighting game and DOAX beach volleyball?

The Friday Ten: Looking back at ten of the best PSP titles