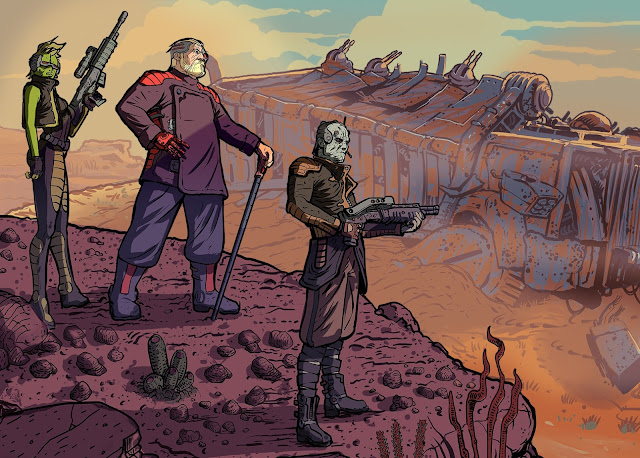 The apocalypse has come and gone. Humans, cyborgs, mutants, and robots all now roam the wastelands vying for the scant remaing resources that exist outside of the lone remaining city. Hearing that a second civilization might actually exist, a pack of humans pile into a giant armored vehicle (the Dozer) and set off for both new horizons and a place to call home. Be prepared as the wasteland is anything but pretty and more often than not only one language is spoken Skyshine’s Bedlam. Lead.

Related reading: If the art style looks familiar, it’s because Bedlam uses the same engine as the incredible Banner Saga.

After being put in control of the group in search of what is hopefully a new paradise , one thing is absolutely clear, the wasteland hands out no free passes. Bedlam is a very serious, very challenging roguelike tactical RPG indeed. Running out of fighters is easy enough, and once it happens the wonderful words game over decorate your screen with your statistics showing you terrible that journey was.

While the goal of the journey is simple, there are so many variables going on that getting there is anything but easy. Right from the outset, as the city gates fade into the background, players can choose multiple path to take that will lead them through various territories. Each leg of the journey requires certain amounts of resources such as food and fuel in order to traverse the distance making supply management the first priority day-in, day-out. 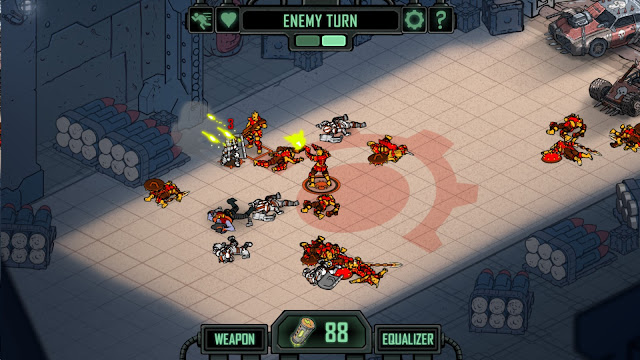 Exploring is a gamble. Starting with a set of finite resources that slowly dwindle down, players will have to think carefully as they move their Dozer across the wasteland. Adding in points of interest close by makes for some resource-guzzling distractions that may – or may not – yield major benefits for the party. With the numbers ticking down, it can be a far more difficult decision than it might first appear on paper.

There are things you can do to improve your situation slightly, though. In order to ease back on the consumption, upgrades to the Dozer may be performed at the cost of a tertiary resource; power cells. These power cells can be used in order to upgrade systems to reduce fuel and food consumption, and they also serve to use the Dozer in battle, so they’re a fairly precious resource, and you want to be careful about how you use them too.

Journeying across the wasteland is much more than simply worrying about resources and how much is left. You’ll frequently run into other survivors in the wilderness, and because everyone is desperate and therefore deadly, diplomacy with these people isn’t really an option. As diplomacy fails there are only two options. Turn tail and run, which costs your Dozer yet more precious resources, or try to blow a hole through your enemies and then take their stuff as loot. 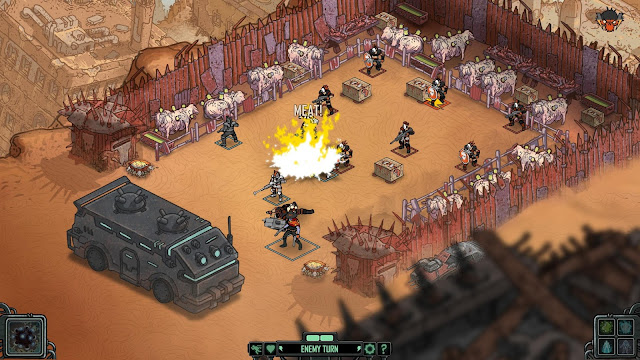 Engaging in combat takes a spin on the well known tactical RPG format. Instead of using statistics based around speed and size in order to determine initiative, the player’s group always goes first and the enemy follows after. Each unit can move or fire in one round. Within that it’s possible to move twice and not fire, fire twice and not move, or move once and fire. This gives players the opportunity to exercise extreme mobility and positioning across the battlefield, and also means that no character is really safe, as the enemy can do the same to you in return.

There are four distinct classes that can take to the field. Deadeyes (snipers), Front Liners (tanks), Gunslingers, and Trenchers (shotgun specialists), all have their moments to shine. Each base unit requires three kills in order to level up to a veteran status who then require four kills thereafter to level up once again. Be warned however, if a unit’s hit points falls to zero, that’s it. It goes without saying that it is a major blow to the cause when you lose a fully-levelled up hero – to the point that your entire party will likely not last much longer.

Skyshine’s Bedlam is a brutal tactical experience that requires a lot of patience and thought. It’s almost too challenging, to the point where it will feel both unfair and unreasonable to many, but there is certainly a community of people out there that will get a lot from this one.

NIS America is bringing The Witch and the Hundred Knight to PS4s across North America, Europe

Hatsune Miku; The Book – the Kickstarter is now live