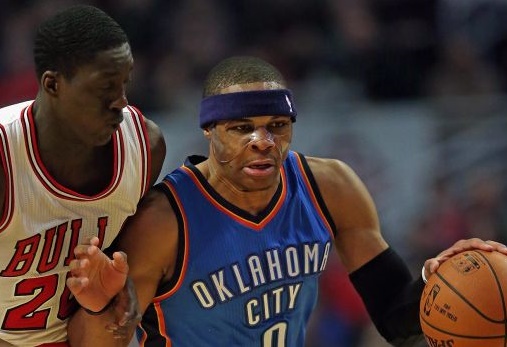 NBA Live 16 shows signs that EA is improving with its patchiest sporting franchise. Considering the state of the series a couple of years ago, this is welcome news. However, there is still a ways to go before the series is ready to reclaim its place as champion.

Things start off quite strangely, in which a mock NBA Finals winning shot sees cover player Russell Westbrook perform a catch and shoot with all of the appropriate noise and fury that would come with such a tremendous moment. Of course, it seems a little strange to see the Oklahoma City Thunder trotted out for this kind of scene since it was their conference rival Golden State Warriors who won the title, but given the fact that Westbrook is the featured player for this game (and understandably so – he had an insane season last year), it makes sense.

You are then ushered into a series of menus where you create your own character. EA titles have use a smartphone app, GameFaceHD, to stick your face on your player in previous games, and here that technology does a pretty solid job of recreating your face on the big screen. Your player also looks quite natural in action among his teammates, as the same technology used to model the faces of the NBA themselve. After that, I dove into the skills trainer and started to go over what was new while polishing up what I was already familiar with, and then it was off to the races. 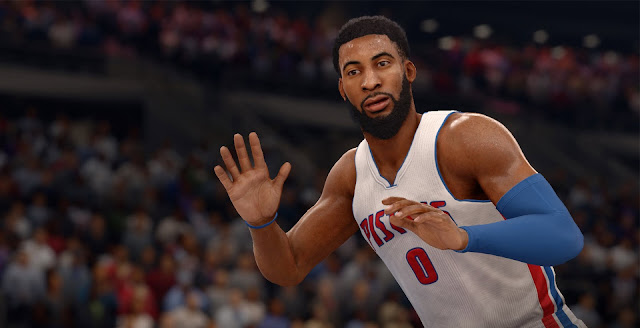 As usual, I spent the majority of my time in the created player mode, here referred to as Rising Stars. There are a good number of customisations you can apply to your character, from different shoes to some crazy tattoos, but the aspect I was most interested in was the progression. Titles like Madden offer an experience per point system, while others such as FIFA and NHL have a system that builds off of what you actually do during the game. Here NBA Live 16 is closer to what Madden leveraged this year, but instead of simply upping your stats by a point here and a point there, progression instead occurs through a milestone system. Sometimes these milestones are only one point apart, but usually they represent clusters of four or five points or more. Often they come with an additional unlock perk, allowing you access to a wider array of dunking or shooting styles or even different kinds of shoes. I actually enjoyed this system quite a bit as it made progressing my character feel a lot less of a grind than in most other sports sims, while still making me work for progress.

Unfortunately the system that keeps track of your player’s performance is solid, but not spectacular. There is an emphasis on being a ball hog rather than a team player, as I can call for passes and ally-oops at will, and my team will always try to deliver, even if it is to our strategic detriment to do so. That being said, some of the other aspects of my coach evaluating my efforts worked well, such as rewarding me for making a good swing pass that led not to a shot, but an assist that led to a shot. Other aspects were hit and miss. Sometimes I would get a positive evaluation point for taking a wide open shot, and then on the very next play taking the exact same shot with just as much space between myself and the defender, I would get a negative evaluation point for forcing a poor shot.

Meanwhile, the LIVE Pro-Am mode takes the previous LIVE Run and adds a Summer Circuit to the mix. These are online modes with competitive and coopertive options for your created player to participate in. As someone who spent way more hours of his life actually playing games of 21 back in high school, it is actually really fun to see that incorporated into the video game here. 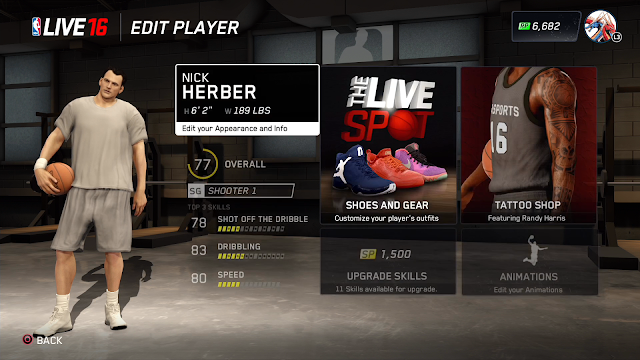 While I still found the majority of my time and effort going into the Rising Star mode, I also found the Dynasty mode to be a large time sink. Here you take on the role of a GM and manage all aspects of an NBA team. You set goals for your team, try to make the big trades and manage the expectations of the board. You can play out your games or sim them, and you have a fair amount of control over the settings for your season. The regular 82 game season plus up to seven games per playoff round can be a huge number of games to invest in, so for those of us who want to try and get several season played within a reasonable amount of time, the flexibility is appreciated.

While most of the off-court features and options are rather solid, right down to other modes like the Ultimate Team (think fantasy basketball meets card collection – a staple in EA sports titles nowadays), the action on the court is what matters most, and here is where the series shows it still has some work to do. To its credit, there is a new shot meter mechanic that is solid, and helps you understand what is a good shot and what is not. The dribbling moves are managed with the right stick on the controller, as are some of the more advanced techniques. However, some of those moves do not execute nearly as well as others – spin moves in particular seem to be a very hit and miss proposition.

There is also a heaviness to the player movement at times that can make defensive adjustments and blocking feel clunky. I played a centre in my career mode (the second time around. I also gave shooting guard a try), and I gave up on shot blocking because it almost never worked and I was constantly out of position and unable to recover. I realise that even the best shot blockers only get a couple or so a game in real life, but I was lucky to get one every couple of games or so, even with a perfect rating in the block statistic and being in the optimal place to make the block, I was still rarely able to execute that citical defensive technique. 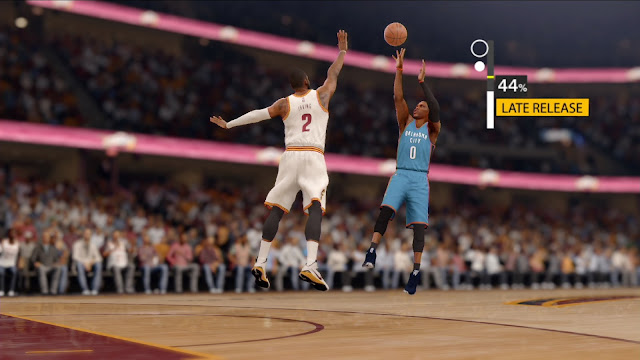 Additionally, there are some really rough edges on the game. A day one patch cleaned up some odd glitches like free throws aimed at the wrong basket, but other bugs remained. The most constant I saw were in my career mode. but the audio would frequently get into an odd state when I was subbed back into the game, where the crowd noise and music were muted and this made the commentary and court sounds oddly loud. It was an intermittent problem that would happen one or two times a game on average. Also some odd visual glitches would sometimes rear their head. In one game against the Lakers, I had an opponent who instead of a lower body was a mess of oddly shaped series of polygons from the hips down. The glitch went away when he went to the bench, but it was there for about four solid minutes up to that point. Also sometimes jerseys would simply be missing from players. Marc Gasol of the Grizzlies spent an entire game running around with no shirt on (and parts of his body were transparent as well, which was quite creepy).

NBA Live 16 has a lot of really solid pieces that are starting to come together. These disparate parts still need smoothing out and the game itself still has room to improve, but those looking for a more arcade-like NBA experience with a variety of modes should enjoy what the game has to offer.