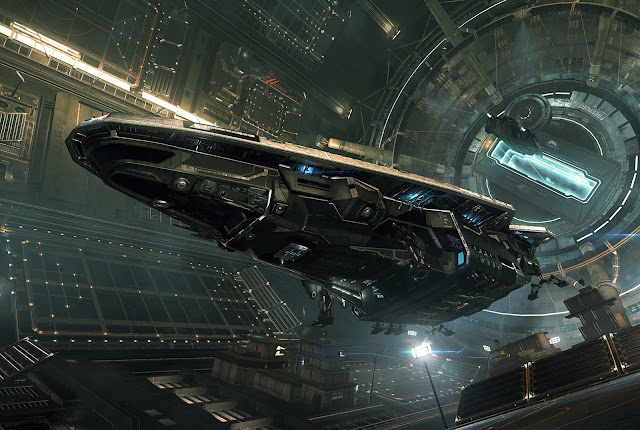 Elite: Dangerous is a mixed bag of great ideas but sometimes rough execution. But given that the end result is a technical, involving simulation game that provides almost limitless options and a genuine sandbox to explore around it, most people should be willing to forgive its more grating elements.

The idea of the open, almost limitless space in front of you, offering worlds of exploration and open opportunities is one that has an almost universal appeal. Whether you envision yourself as Han Solo or piloting a ship from the series Firefly, having access to the limitless reaches of space is a genuinely timeless fantasy.

This openness allows you to forge your own personal narrative as you adventure, which I was largely fine with. At the same time, with all of these worlds and exploration in front of you, the complete lack of any real story by the game occasionally left me with an empty feeling, like my actions had no real sense of consequence. What your missions and choices essentially boil down to are an endless grind in order to earn more cash (credits) so you can buy better gear and explore even more effectively. Perhaps we’ve all been spoiled by the narrative genius of Mass Effect, but it’s a definite reality that a modern space game that lacks a detailed narrative is a jigsaw puzzle with a couple of pieces missing. 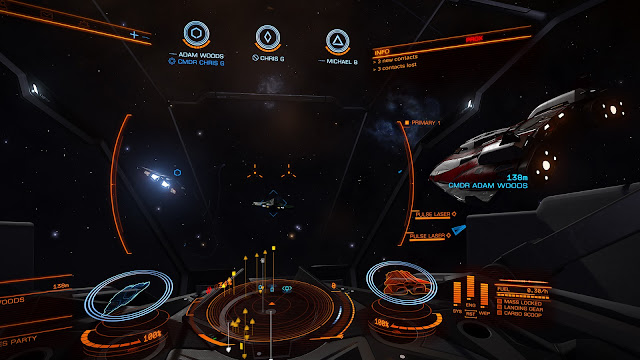 The grinding is a nice feedback loop, though, offering an appeal not unlike games like Diablo where you are constantly looking to upgrade what you currently have. The freedom to play how you like is also enticing. When you first start the game, your ship and resources are pretty limited. You can fly to a space station and pick up some missions that will help to define how you play the game during your fledgling hours. Do you want to explore, mostly avoiding combat, or do you want to be a force to be reckoned with along the way? There are advantages to differing styles of play, and to that end Elite Dangerous is actually quite accommodating and this progression cycle is certainly an addictive one.

There always seems to be something to do. Whether you want to make a quick smuggling run or engage with pirates, you can earn credits a variety of ways. There are lots of places to stop at and things to be interacted with, creating a dynamic universe worth exploring. It’s a pity, then, that the online experience breaks this all-encompassing immersion. Those who are looking to interact with people playing the game on the PC, will come away frustrated by the invisible wall that exists between the two platforms. While both sides of the house share the same ecosystem, players are only going to interact with other players on their own platform. And this is the kind of game that could have used having as many players online interacting with one another at the same time as possible.

There is so much to do and take in while sitting in the cockpit of your ship. Elite Dangerous is more simulation than arcade game, with even piloting something of a challenge early on. You need to learn how to handle your momentum when approaching other ships, or even more importantly, space stations that will not hesitate to shoot you down if you try to land erratically and are seen as a threat to their safety. I have not had this much trouble landing an aircraft since the old NES days with Top Gun. Once you get past the initial learning curve however, the gameplay starts to feel more natural. It makes sense that the mechanics are a challenge to learn, because travel is at the heart of what you are doing with your time. 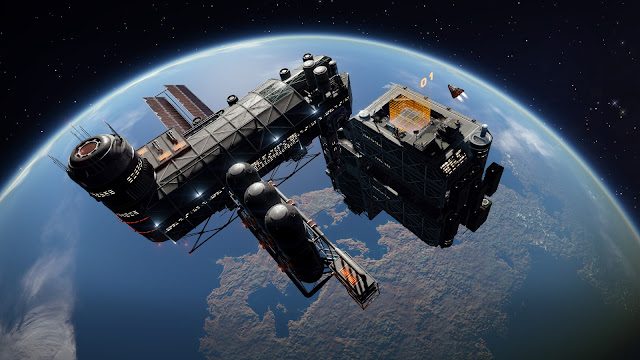 This can be both a positive and a negative, depending on your perspective. With such a massive universe of options, it feels like there is always something to do. Yet, a good chunk of your time is spent simply going from one location to another. You just set a destination and… cruise. Of course, you must keep an eye on what’s going on around you, and adjust if you get pulled out of your path by space pirates or when approaching your destination, but games that simulate the morning commute to works aren’t necessarily the definition of entertainment. That being said, unlike the morning commute at least here I could set my course and go to the kitchen to grab a beer, knowing that nothing will actually happen while I’m away anyway.

Space is a tremendously large and often lonely place. The atmosphere is set up beautifully by this need for distant travel and is further assisted by some truly spectacular visuals and often beautiful music. There is an cinematic quality to many of the scenes, with the graphics both beautifully vibrant in colour while still being detailed and realistic-looking. The soundtrack often reminded me of Mass Effect, which is a very high compliment.

Related reading: Game theory on Mass Effect and space operas; was humanity wrong to fight back?

Elite Dangerous is a very cool, atmospheric experience with an outstanding presentation. The flexible gameplay and progression loop are two great reasons to keep coming back for more if the game’s mechanics click for you. However, it is easy to see why some people might be turned off by its aimlessness, and with the lacking narrative contextualising what you’re doing, you might be left with the nihilistic question of why you’re bothering doing anything at all.