Ladies and gentlemen, I have seen the future and it is blindingly colourful. Call of Duty Black Ops 3 is set in 2065, forty years after the previous title, and is looking to be a bit more Advanced Warfare than the series’ previous ‘fare. Human augmentations run rampant, robots are everywhere, firepower is cranked up to eleven and camouflage is apparently obsolete because everything is garishly painted like you wouldn’t believe.

The EBExpo demo actually had a swathe of maps and modes, with all nine of the game’s character classes well fleshed out. The basic modes of deathmatch and capture points are still there, although each of them has a bit of a futuristic flair. One mode has you escorting a robot to the opponent’s base (kind of like the Payload mode from Team Fortress 2) and another has you chasing a moving capture point to calibrate your team’s reconnaissance. To be honest they’re not that different from standard FPS modes, except that’s clearly not where Treyarch has decided to jazz up the Call of Duty experience.

The biggest change is definitely the additional movement and attack options afforded to characters thanks to their augmentations. A rocket boost, wall running and a powerslide are all available, allowing players to move around the map much faster and in more unpredictable ways. If you’re old fashioned though and like to have both feet on the ground at all times, all the maps still accommodate that kind of playstyle. Black Ops 3 also offers a class system on top of the traditional loadout system, where your chosen character has a variety of special moves which can be performed. Most of them involve flashy futuristic weapons (except for one character who despite all technological advances still insists on using a bow and arrow) so players will have even more options in battle. 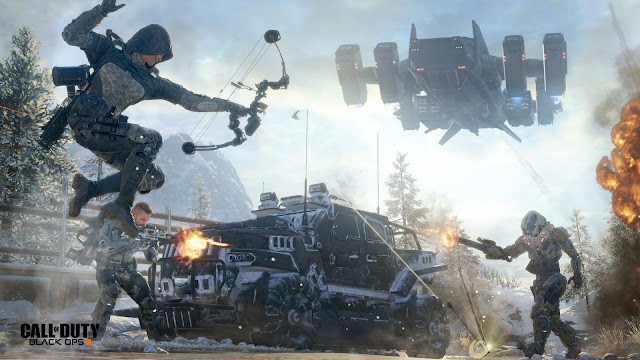 The addition of all these options means that games are lightning fast. You can get to the enemies much quicker to join in the fight. You’ll probably be taken out of the fight just as quickly, as most of the basic weapons are high powered and can kill with one or two shots. This is definitely a game about empowerment, and admittedly I did feel powerful that I was racking up kills just by aligning the crosshairs and pulling the trigger. Unfortunately, in the long run it might sacrifice team coordination for individual twitch gameplay. It also means you’ll also be dying a heck of a lot more, but the instant respawn and tightly designed maps will let you be in on the action all the time.

As for the narrative, I worry that Black Ops 3 might go the way of Battlefield Hardline, in that it will touch upon some incredibly important moral issues and then opt to ignore them entirely for the sake of telling an easy to understand but mindless story. There are a lot of drones in Black Ops 3 – over half of the killstreak perks involve drones in some way, many of which are autonomous. You feel incredibly helpless when there’s a robot shooting you from the sky and there’s nothing you can do about it, but I worry that the game will completely ignore the contemporary concerns of using drones in warfare in order to maintain the illusion of empowerment. Similarly, the idea of technological augmentations to improve natural human ability is a massive issue which was tackled in part by the Deus Ex series, but I suspect Black Ops 3 won’t go much further than imploring how cool and powerful having augmentations must make you feel.

At the end of the day, Black Ops 3 will likely be a very different game for Call of Duty veterans as it doesn’t quite play like anything else in the series, but for players new to the franchise there might not be a lot to differentiate it from other shooters out there. The gunplay is still the same tight design we’ve come to expect from Treyarch and the story modes from the previous Black Ops games have been superb so I’m packing some high expectations for this one. At this point, the series is too far detached from reality so I can’t exactly expect it to deliver any relevant commentary on the state of modern warfare. Instead, just prepare to check your brain at the door and not think too hard about what you see, and take in all the adrenaline and high flying action that Black Ops 3 has to offer. 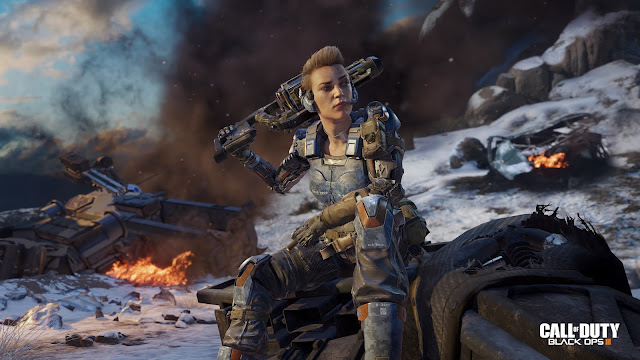 Note: This preview was written after playing a variety of multiplayer matches. While I was able to try out all the classes and a bunch of maps, I didn’t unfortunately see any part of the single player experience or the zombie mode.