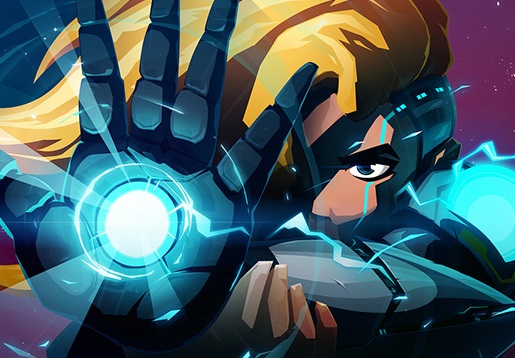 In this day and age a lot of things try to be fast paced in order to fit with the tastes of the easily distracted. But how do you make something fast paced? Through the speed of gameplay? Giving players a ticking clock to keep their pulses beating as they race against time? Or do you build something that requires second decisions which become the difference between life and death? Combining all of the above, Velocity 2X from FuturLab is a great mix of platformer and shoot-em-up that certainly deserves the title “fast-paced.”

From the start one thing is extremely clear: cold fingers will only lead to failure. Starting off quickly, players are thrown immediately into the action, with smooth, responsive controls allowing for some pretty fast paced shooting action right off the bat. While the screen through the shoot-em-up sequences does scroll automatically, it does so at a slow pace and allows players to add in some additional speed if they want. Making the decision to move at such break neck speeds to complete a level 100 per cent, or take a much more conservative approach and miss the timer objectives is such a simple risk/ reward mechanic, but it works so well here that it’s impossible not to be tempted to go for too much in the hope of really nailing the perfect run.

Trading the safety of the ship with its protective hull and very fast engines, our hero sometimes has to do things with her own two hands and heads out to do some exploration on foot. Following a similar philosophy towards design, the platforming is just as fluid and pacey, but this is also where things start to get really interesting. Lt. Kai Tana starts off her adventure in an operating theatre lying unconscious on the table. In order to save her “weak human body”, which is being compared to some rather bulky looking alien species silhouettes, those operating upon her decide that a few “upgrades” may not be a bad idea. The new and improved Lt. Tana is then able to do some short distance teleportation and fire lasers around with impunity. And that’s not such a bad deal. Velocity 2X as a whole is more than two packaged styles thrown together to increase the amount of gameplay. The two play styles blend seamlessly with one another with a finesse that is rarely matched. While flying through the stages you’ll notice there are locks that must be shot open either with lasers or with directional explosives that are later acquired. Jumping from a quick paced shoot-em-up, the transition to platformer is surprisingly seamless. While these two styles couldn’t be more different from one another, the consistency in artistic direction keeps everything together, and it’s immensely rewards to watch Lt. Tana develop as a character, which is something we rarely see in straight-up SHMUPs (since you never actually see the characters in those games).

While hopping back and forth between the two styles some of the elements will bleed over from one to the other which truly cements the overall experience as a single entity. Quick teleport jumps, which only exist in the game because of Lt. Tana’s need to explore about on foot, come in just as handy when flying through space, for example.

Velocity 2X is an awesome example of how shoot ‘em up and platformer can share a coexistence. For people who find the typical shooter a bit dry and impersonal, the platforming sequences help to instill a sense of character and narrative that is refreshing for the genre. And for platformer veterans, the ability to jump into space adds a new dimension to a genre that often struggles to innovate. The result is a game that offers the best of both worlds while hiding some of their weaknesses.

DDNet does Japan! Day #24: The indies of TGS