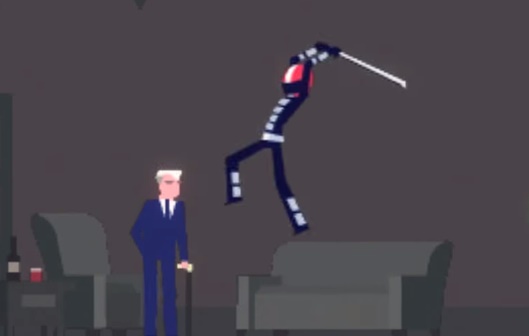 After doing some research up on RONIN and finding out that it’s a “turn-based platformer”, I initially thought Steam had made some error. Such a genre combination couldn’t possibly exist. And yet, in this stylised stealth title by Tomasz Waclawek and published by Devolver Digital, the spheres of turn based strategy and skill based platforming do indeed collide. RONIN is an eclectic mashup of action, strategy, ninjas, spies and sci-fi with challenging gameplay and solid mechanics.

In RONIN you play as an unnamed ninja heroine (so, actually a kunoichi and not a ronin at all – ed) who must take revenge against the five heads of an evil corporation. Each one is locked away in a fortress with a location hidden in a bunch of arbitrary computers, so it’s your job to break into each complex, kill all the armed guards and enact your revenge. The story never really branches too far away from this simple concept and while I would have liked there to be more development for the characters and the world, RONIN has enough plot to carry you through its duration. This is most definitely a game about mechanics, featuring a platforming stealth element similar to Mark of the Ninja as you guide your protagonist through each security complex. Once you’re spotted by the guards however, time stops and the game shifts into its turn based mode, making its fights all about strategy rather than skill.

The strategy aspect of RONIN is quite comparable to chess, in which you see the potential moves of all your opponents and can choose one of your own. Your aim is to use jumps, grapples and a variety of skills to avoid enemy fire and position yourself in order to mount a counterattack. In each round you can perform one action, whether it be jumping, attacking or using a skill, and each enemy which sees you will fire a shot along their red warning line. The protagonist can only take one hit before she dies however, so the utmost care must be taken in choosing whether to press the offensive or retreat to a safer vantage point.

This is where RONIN seems to suffer from a bit of an identity crisis. The stealth aspects play out fine, and so does the strategy segment, but the transitions between the two feel awkward and incoherent. Usually stealth is used to sneak around enemies and ensure the odds are stacked against you when all out combat breaks out, but otherwise levels are designed to be a linear series of combat rooms with little in between. This is fine in the earlier levels but becomes far worse as the game goes on and more mechanics are introduced. At times I felt like the game was throwing way too much at me at once, taking as many as ten rounds to muster a finishing blow on just one of the ten enemies in one room. To continue the comparison to chess, the later levels feel like being stalemated as your opponent greatly outnumbers you. It means making dozens of moves and inching forward against your disadvantage, knowing that a single mistake will cost you the game.

The game features light RPG elements in that successfully completing the bonus challenges in a level will unlock a skill point, which can be used to unlock additional abilities for the heroine. The challenges are to complete the level without harming civilians, prevent the alarm from being sounded and kill all hostiles, and only completing all three at once will net you the skill point. Unfortunately, I felt that some of these skills were essential for completing the later levels at a reasonable pace since they increase the complexity of fights, allowing you to pull off kills that simply aren’t possible without the skills.

The graphics feature a muted, geometric style which gives it a very unique look, and it doesn’t need a lot of flashy effects to get the message across. The minimalistic tone lends comparisons to similar titles such as Gunpoint and Devolver Digital’s own Hotline Miami, both of which have a similar focus on killing enemies using strategy rather than brute force. RONIN’s soundtrack is also something to admire, fitting the game’s tone perfectly while still being fascinating to listen to. 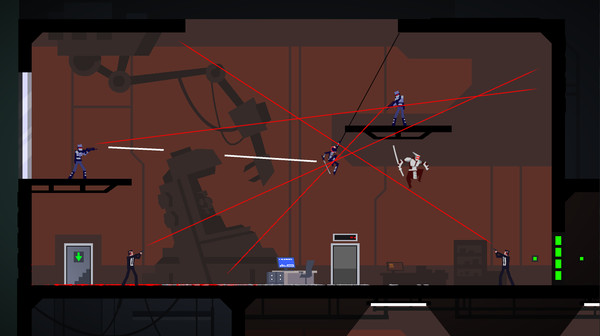 RONIN is over in around seven to eight hours but the lengthy design of the levels makes it feel a lot longer than that. When you’re locked in a stalemate with ten armed guards, jumping around the walls to avoid gunfire is more tiresome than engaging. RONIN is good for a few short levels in your spare time, but I can’t fathom playing it for a long session.