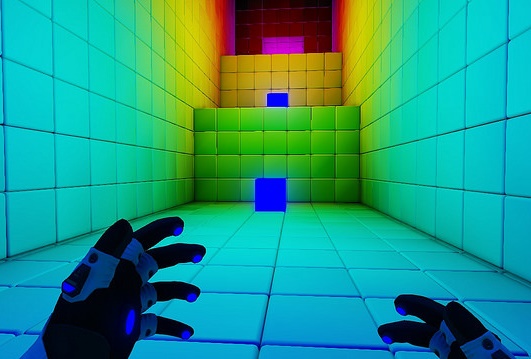 Ever since Portal, I think it’s safe to say that the first-person puzzle genre has suffered. A lot of games have tried, often unsuccessfully, to do what Portal did, and that is to create a game that successfully combines strong puzzle elements with an interesting narrative. Q.U.B.E., or Quick Understanding of Block Extrusion, is a puzzle game from Toxic Games. It was first released 2011, and has now been released as a Director’s Cut.

Related reading: Our review of the original release of Q.U.B.E.

Q.U.B.E. has a good mix of both puzzle and narrative. The puzzle design is strong, and it all centres around the player having the power to manipulate coloured blocks within their environment. All blocks are placed within the walls and floors of the compound, so players are tasked with extracting and retracting blocks to get to the exit, or lead a ball to a goal. Red blocks can be moved one space at a time, where blue blocks act as a launch pad, and other coloured blocks will each have different effects to experiment with. The implementation of a simple colour scheme allows for players to quickly understand the puzzle requirements when they first enter the room, without overloading them with too much information. There are also some really good examples of level design, one memorable area affected by a blackout, only one block out of four would be illuminated at any one time, requiring players to switch the power on and off to get to the goal.

The narrative emerges from two different voices. As a silent protagonist, you are not given the opportunity to have a discussion with these voices, so it’s up to you to align with one of the two. The first character you’re introduced to, your main guide of sorts, is a member of the team trying to help in the prevention of Earth’s destruction. She informs the player that he is on an alien spacecraft that will slowly crash into the planet, with puzzles being used a means of deactivating the craft. The other voice challenges everything this first voice says. According to him, you are nothing more than a test subject. With your memory wiped, it’s your fate to continuously undergo rigorous testing in an underground facility. 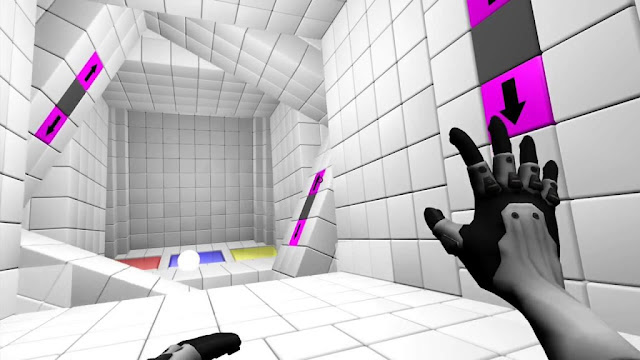 These two clashing narrators add a great feeling of tension. At every opportunity, they counteract each others points until you’re in the middle of a crossroads. Do you believe the woman, who has foretold of Earth’s destruction? Or is the man correct in his theories of an underground testing lab? Sadly, this storyline is abruptly cut short, with the ending only offering you one way out. The build up is ambiguous enough to keep you wondering about who is telling the truth, only to be given no explanation as to why one of the two voices is talking to you the way they are.

Once the game is beaten, aside from going back for some hidden achievements, the replay ability comes from the time attack mode. They introduce new puzzles that are all fast paced, with the main objective being to get the lowest time possible. It’s a fun add on, that gives players more puzzle options, which is always a good thing.

Director cuts to me are always the final intended product. It’s the final vision of how the game was meant to be played and looking back at the original Q.U.B.E., the changes have been great, adding the story would be by far the biggest. Yet, no matter how strong the writing is, or what it makes you feel, it’s ruined by those final few minutes at the end of the game. It felt as if the whole experience, whilst rather short, left me in an inconsequential role, like I was simply listening to an argument between two people in an elevator.

Trailer: Onechanbara Z2: Chaos has action and bikinis and things

The Legend of Legacy confirmed for Europe, courtesy of NISA