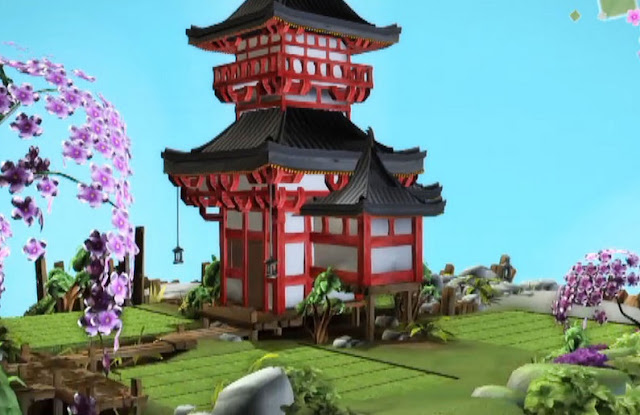 So often when we talk about great games, they come from the minds of the creators who have been in the industry for a very long time. And so it’s really great to see young developers being given the chance to show the world what they have to offer, and it’s even better when what’s on offer is a very promising title. PieceFall is brought to us from Steel Minions, a studio that is based in the Sheffield Hallam University, and is made by students.

By no means are the developers trying to take over the reigns from Kojima or the late Iwata, but there’s an understanding at play here that many developers take years to achieve, if they ever do. PieceFall sees players place falling Tetris pieces into blank spots of land across four plots on floating islands. Each time the plots are successfully filled, the an object in the middle of the land starts to slowly restore itself to its former state. It’s a nice, clean, environmental metaphor for the benefits of efficiently using land and “completing” the earth so that, while the game doesn’t have an explicit narrative, the implicit one is of a positive message.

Considering its small price tag, only being listed as $Aus1.85, 48 puzzles is a generous offering, especially as three of the four islands can be quite taxing on the mind. Once you have played it though, puzzles stay the same and any incentive to replay the game, aside from the nine minute speed run challenge, is minimal. Each puzzle has players dropping two to five blocks down into a six by six grid. The pieces and their orders are predetermined, so there’s no element of luck here – it’s purely based on the player’s skill level. 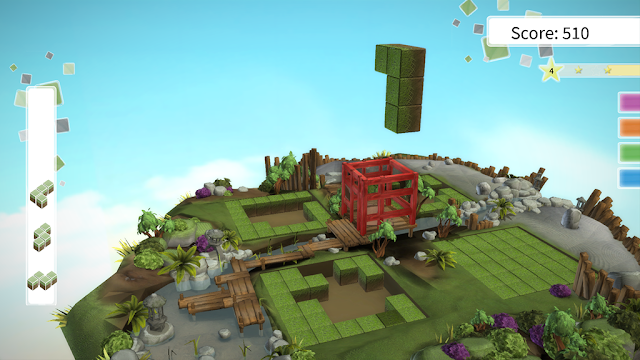 As a puzzle game, it’s very simplistic, and there are some issues that emerges from the control scheme. Only the two control sticks are used, with the left to move the block while the right rotates it. I still can’t get my head around the rotation at times, and that’s a frustrating experience. Additionally, the camera is not changeable and set at an awkward low angle for seeing the whole grid, meaning that there is the odd level where it can be difficult to see where you can place the pieces. These are minor complaints, but because the variety of content is small, and I had to replay many levels often, it was a consistent annoyance.

PieceFall is sold as a puzzle game, but it is much more than just that. It’s an experience that tells a story of repair. Every time the island is put back together, it grows, as do the structures that were previously on the island. From building windmills, to a statue of an Egyptian god, it is all entered around re-building these sculptures. Combine this with the beautiful art style, and the relaxing music, it works as a relaxing little diversion, and because it will barely tap into any memory on the PlayStation 4 hard drive, there’s no reason not to keep it among the blockbusters for some variety.

Props should also go to Sony, which has taken a risk in allowing student developers to release commercial products on the PlayStation Network. This game comes from a team of students from a British university, and is a great teaser for the kind of experiences we will enjoy if this initiative continues.