Humans tend to have strong opinions on cats. Either you adore their little meows, loud purrs, and aloof attitudes, or you would just rather have a dog. I personally fall into the former category, dating back to my paternal grandmother’s obsession with the mouse-loving species. There was no chance I was going to turn down the opportunity to play Fort Meow.

The game begins with young Nia being sent to spend some time with her grandparents. Upon her arrival, she finds the house seemingly empty. She ascends to her usual room in the attic, where she stumbles upon her grandfather’s journal. She sits down to read it, but is shocked when a cat flies in out of nowhere and lands in her lap, making it impossible to read. Obviously, the only solution is to build a fort to prevent to flying cats from taking up camp in Nia’s lap.

Fort Meow plays almost like a reverse Angry Birds, which is a game that quite honestly bores me. Instead of destroying a structure, you are building it. Imagine you’re playing as the pigs trying to hold out against the onslaught of birds, and that’s it. Nia’s fort is made up of objects she finds around her grandparents’ home: cushy chairs, old brooms, and mattresses are only a few of the many objects that can be used to protect her from the airborne adorableness. Anyone who built forts as a child will feel a big wave of nostalgia when first setting a mattress upon two chairs to create a roof – although my preferred method as a young scamp was blankets and couch cushions, even I could feel the familiar rush of making a hideout. Luckily, it turns out I like building way more than destroying in physics-based games, and at this point I’ve already stopped making the Angry Birds comparison in my mind.

During the first few levels, Nia only has a select few items to build her fort. As the game progresses, she finds a machine capable of helping her lug heavy furniture up to the attic. The machine requires battery power, which is given in small amounts with the completion of each level. What she chooses to bring up and when is all up to the player, but she can only remove items from one room at a time. When the room is fully cleared, a hint will appear with directions on finding a light bulb and gaining access to a new room. Finding the new bulbs involves such a minimal amount of skill that I’m not sure it adds anything to the game other than maybe two minutes of total gameplay time.

One element that does add a much-needed layer of difficulty in Fort Meow is hit points (HP). All objects used for fort building can take a certain number of damage from cats before breaking down completely, and their HP is listed when you press on the item in the inventory bar at the bottom of the screen. Much like items being able to take differing amounts of damage, different cats can dole out different damage. Cats also come in from different angles depending on their type: melon-headed cats come in low but with little damage, whereas fat cats come in with a high arch but cause more damage.

Nia can’t just pile up all the objects and call it a day. There is a time limit, and each placed object costs time. The more the game progresses, the more time is available to build you fort. Referring to item costs as time seems a little odd at first, but the annoyance fades quickly as the need for strategizing past cost increases. Nia sometimes gives hints as to when certain cats will appear, making it important to place the correct items in the correct places. Some objects have perks, such as decreasing damage or increasing the amount of power dropped. Helpful gifts sometimes arrive accompanied by a hearty doorbell sound (how do they get from the front door to the attic?); these gifts can include items to use while defending (for example, drag over an object in play to repair it) or parts to build a special object.

When Nia survives a wave of cats, she can either explore the house or defend against the next wave. When a cat lands in her lap (or she’s been “Invaded!” as the game describes) and the level needs to be restarted, the cay purrs away happily. But wait… I DON’T want a happy cat in my lap? Weird. I found that when furry ones were continuously invading, it was best to just stack everything up as tall as possible before defending again and again with the hopes that one little thing would go differently. It’s a bit of a strange loophole: wouldn’t physics cause the reaction to be exactly the same time after time?

There were a few other ways Fort Meow acted strangely. Rotating objects on the touch screen is a bit awkward. And super-slim items like brooms sometimes can’t be picked up without fully rebooting the game. With regards to the game’s interface, it would be useful to have a “clear all” button when building the forts (starting from scratch is often useful but also needlessly time consuming). There is also no way to replay levels on an individual basis without having to restart the entire game again. 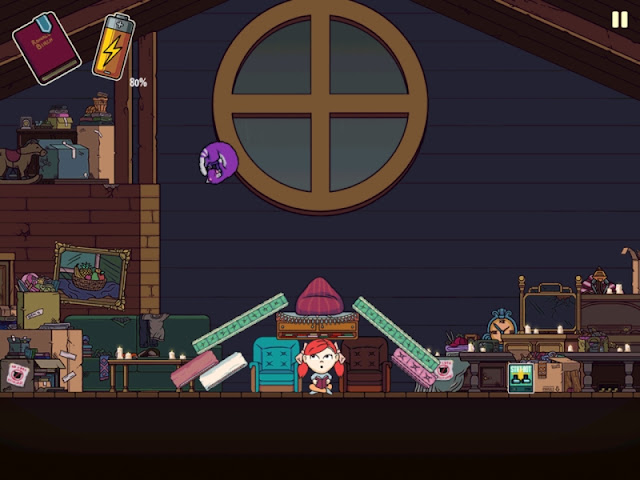 Those issues aside, Fort Meow looks and sounds adorable. Cats are colourful and stand out from the background, and their purr sounds are beyond realistic to the point of attracting my own cats’ attention on many occasions. Unfortunately, the background and usable objects are all the same colour palette with the same outline thickness so at times it is difficult to differentiate while building a fort. When you’re looking for that one object to move, it becomes more of a tedious hidden-object game than the promised physics-based puzzle. Actually, the levels as a whole start to seem tedious after two rooms have been cleared of new objects; it’s an unfortunate end to something that was promising at the start.

Where the monotony of the levels fails, the story more than makes up for it. As Nia gets farther into her grandfather’s journal she learns about his scientific career. She also collects stamps as she goes, as apparently the cats have gotten into the collection. Stamps are a fun aside, but I often forgot about them as they never seemed important. As the story progresses, Nia learns why the pet-free home came to have so many cats.

Never before has there been a game that makes you feel so warm and fuzzy when you fail your task. It was difficult to want to win when the outcome of losing was purrs that would warm the cockles of even the coldest heart. Once you look past the adorableness, Fort Meow is a solid puzzle game with perhaps a little too much luck thrown in. It is great for cat lovers, though maybe less so for the dog lovers of the world.

Last chance: Please help DDNet get even better with our survey!