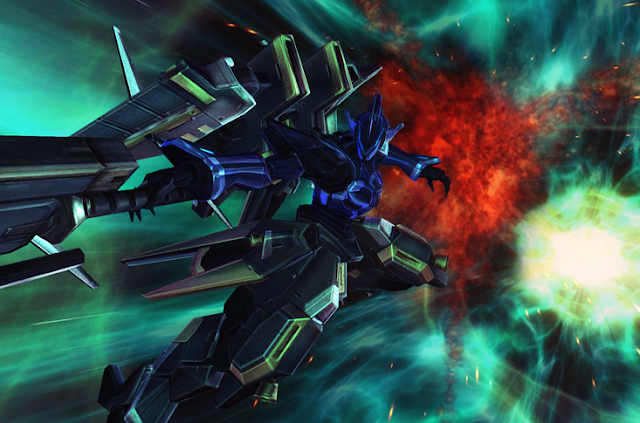 I will never claim to be an expert at shoot ‘em ups. Except for Resogun, I wasn’t bad that one. But that doesn’t mean that I find them unenjoyable, and I especially like when, as with Astebreed, they do something a bit different than the norm. Coming from developer Edelweiss and already having been out for a year on the PC, this colourful, fast-paced, sword swinging, bullet flying, anime-ish adventure is now available on the PlayStation 4.

Astebreed differentiates itself from the rest from the outset with a simple shift away from the 2-dimensional movement that is typical for the genre. Generally shoot-em-ups have players sticking to one form of movement, be that horizontal or vertical, and across a flat screen. But here players will instead have to move their mech around horizontally, vertically, and across the Z-axis, all within one single stage. Some sections will behave like a traditional top-down shooter. Others will be more like Star Fox or Liberation Maiden. This dynamic, changing style allows for a lot more diversity in the level designs and the style of enemy attacks. More than that though, it keeps players more on their toes as the same attack patterns don’t necessarily work the same way from one perspective to the other.

Following on the path of doing things differently, our mech, named the Xbreed, does more than just shoot infinite streams of lasers at oncoming enemies. Available from the start without having or needing any upgrades are three weapon systems, including a sword, direct missiles and target lock-on lasers. Because these weapons don’t need to be unlocked, the developer is quite happy to build the different weapons into the strategy of each level from the outset. Enemies all have their own strengths and weaknesses to each of the weapons, and finding out which is a must if you want to do well when the action picks up. 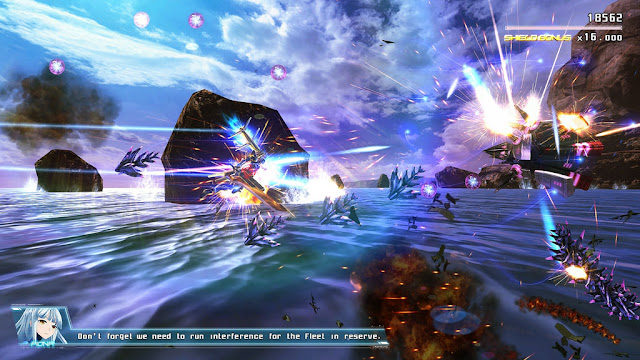 The second mechanic that the sword and lasers offer is more of a survival mechanism. Enemies fire energy in three different colours (purple, yellow, and red). Purple energy streams can be warded off by firing lasers. If they do manage to hit the Xbreed they thankfully deal the least amount of damage. Yellow energy can be sliced through with the XBreed’s sword, but they do a bit more damage if they connect with the hull. Red are, well, dangerous.

Between being able to shoot and slice your way through energy barrages is a nice change for a genre that has previously been about dodging out of the way or wearing hits. If all hell breaks loose and there seems to be no way out there is still the ability to dodge which allows the XBreed to move safely through and out of the way of any incoming fire. This is also the only way to avoid the red energy, which inflicts significant damage and cannot be repelled even after the Xbreed upgrades into the titular Astebreed.

If shooting, slicing, and dodging enemy fire isn’t enough and the Xbreed does take damage, this awesome mech contains an auto-repair system that will work even in the most dire of moments. As long as a timer counter does not hit zero and a few seconds have passed without being hit once again, the system kicks in and gradually restores all missing armour points. In doing this, players are given a last opportunity to let sheer skill get them out of a tricky spot, making failures then feel very fair. 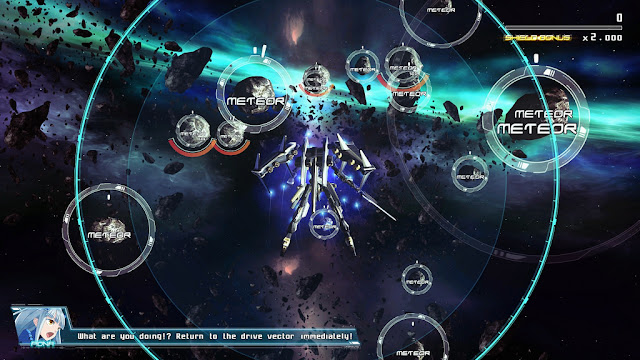 While Astebreed’s gameplay is great, and this is really important when it comes to shooting down hundreds to thousands of enemies, it’s not the icing on the cake. Instead of trying to balance out action based segments and lengthy cutscenes to tell a story, everything instead plays out like an Anime OVA never sacrificing one over the other. Each stage comes fully voiced in Japanese with English subtitles appearing in dialogue boxes which really helps carry an authenticity about the characters and their banters. There’s enough there to sustain a quality story, but keeping storytelling brief also prevents the game falling into a lull that can sometimes happen with other games that fall too much in love with their words. I love you, Metal Gear Solid series, but that was a lot of popcorn. Having created a steady flow of both narrative and action, there is never a dull moment from start to finish.

With everything that Astebreed has to offer it is not an overly long game. For some this could be a drawback but it honestly isn’t a bad thing considering what is packed into six decently lengthy stages leading to a stellar ending. Never overstaying its welcome, it does not take much more than an hour or so per playthrough depending upon the difficulty and the player’s mastery of it, but each difficulty level adds in more elements that escalate its difficulty significantly. This genre has never been known for its length, but the difficulty is enough there that you’ll not finish it as quickly as the raw runtime suggests you will.

While Astebreed may be short in length, it more than makes up for it with its anime styled storytelling and quality, fast, furious action. It’s another classy little indie game on the PlayStation 4 that further enhances the console’s value.

Trailer: Let’s remind ourselves why Persona 4: Dancing All Night is going to be incredible