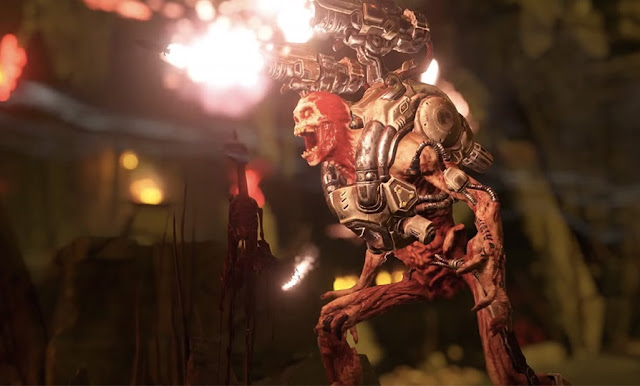 When Bethesda’s representative got up on stage at E3 this year, his big introduction were words to the effect of “are you ready for blood, guts, and blowing things up?” (I’m paraphrasing, but those were the precise three terms he used).

Related reading: Our summary of the Bethesda conference.

Now, the comments were obviously in relation to Doom, a major Bethesda project that was also the first thing it showed off through the conference. Nevertheless, Doom wasn’t mentioned in this little introduction. Just “blood, guts, and blowing things up.” And the response? A loud, raucous cheer.

That’s right. Without any context the simple mention of blood, guts, and blowing things up got people, quite literally, cheering at the top of their voices. And then we got to see Doom. In a near half-hour presentation we got to see plenty of the promised blood, guts and blowing things up. We got to see a chainsaw actually deconstruct a monster in a fountain of blood. We saw the Doom guy stomp on a dead dude’s arm and break it off (with more blood) because he needed to use it as a tool. That’s apparently what passes for a “puzzle” in the new world of Doom.

And when we weren’t seeing blood, we were seeing Bethesda preen about the robust map creation mode for the multiplayer. Which looks good. As does the blood. It’s very pretty blood. The explosions are visceral, and the sickening wet noise that exploding heads make (at least, in the mind of these game developers) showed incredible attention to detail with the audio fidelity. It’s a gruesomely beautiful game, and I’m not criticising the technical merits or effort that has clearly gone into it. 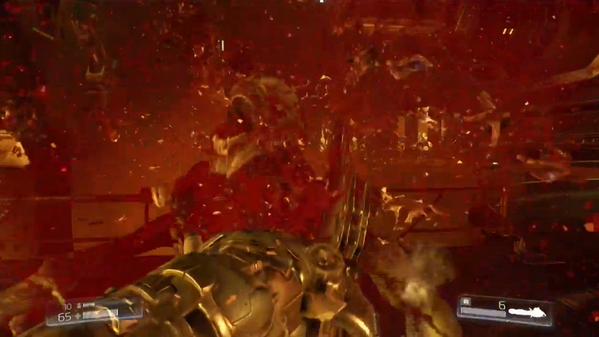 But that’s the thing. In the half hour we saw presentations of Doom we saw Bethesda do its best to show players that it was ticking off the checkbox for a blockbuster mega-hit (i.e. extreme violence and robust multiplayer). But we also saw that it forgot to provide any context to any of what going on. There was no hint of the game’s narrative (other than a vague promise that the narrative is as good as the “series is renowned for” – no joke. Doom). We were even promised a look into “hell,” only to be presented with a vision of yet more post-apocalyptic corridors. If that’s hell, it’s the personal hell of Hieronymus Bosch for being so unrelentingly boring in its design. It was like a horror game that had replaced all the horror with, well, blood, guts, and blowing things up.

It’s time we had a proper conversation about the role violence has in games. That is to say we need to move past this nonsense of villainising violence, or defending its use from its detractors simply because it’s not the villain that the detractors make it out to be. Sane people understand that the science that finds that games do not cause people to become violent is valid science. Likewise, no sane person is suggesting that developers should remove violence from their creative repertoire, either. In fact, violence is a critical artistic tool precisely because it is primal, visceral and confronting. Films like Saw and Hostel would not be as effective as they are were it not for their use of extreme violence.

But those two films demonstrate beautifully a fundamental difference between the film industry (and every other art form) and games. What made Saw and Hostel such excellent films is that they provided a context for the violence. Hostel was a critique of capitalist decadence and class warfare. Saw is a deconstruction of personal and social hypocrisy, framed in the context of game theory, the prisoner’s dilemma, and other similar social philosophies.

But Doom is just blood, guts, and blowing things up. At least, the way that Bethesda framed it through the presentation. There was no narrative context to justify the violence. There is, of course, the vague threat of demons invading the planet, but that’s like calling an episode of Teletubbies an in-depth and intelligent narrative. It’s an insult to the intelligence, and if there is a rich narrative to Doom (and Bethesda do understand these, as we’ve seen in the oddest projects from it, including Wolfenstein itself), then the people writing the script for the stage show didn’t see fit to clue us in to that. Not when there was blood, guts, and exploding stuff to show off. 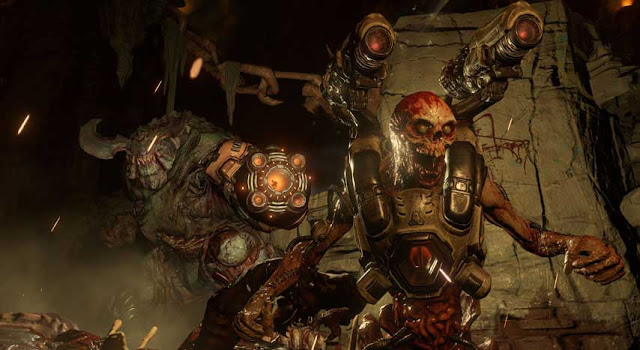 If Doom was an isolated example, then it wouldn’t be a problem, but for years now commentators have pointed out at E3 that when it comes to the blockbuster side of the industry, the violence is gratuitous and in almost everything. This industry has such an obsession with context-free violence simply for the sake of throwing that violence in there that it’s running quite contrary to the idea that games have artistic merit, because at the blockbuster end of town developers and publishers aren’t being rewarded for the brutal impact that violence can have on their impact. They’re being rewarded for providing nothing more than blood, guts, and explosions.

Given that the same industry just loves to demonise games with even the slightest hint of sexualisation, the cheering ovation that Bethesda enjoyed simply for mentioning blood, guts, and explosions, is yet another example of the ridiculous double standards that are applied to this industry. Double standards that harm, not enable, the creativity and artistry of creators, as it effectively forces them to conform to a narrow set of expectations if they hope to see commercial success.

Violence in games is, again, fine. It’s great. I love violent games. But it would be nice if the AAA industry could respect the intelligence of its community just a little. We are quite capable of enjoying violent games that make a point of the violence and give it some context beyond a brain-dead opportunity for a bloodbath, thanks.