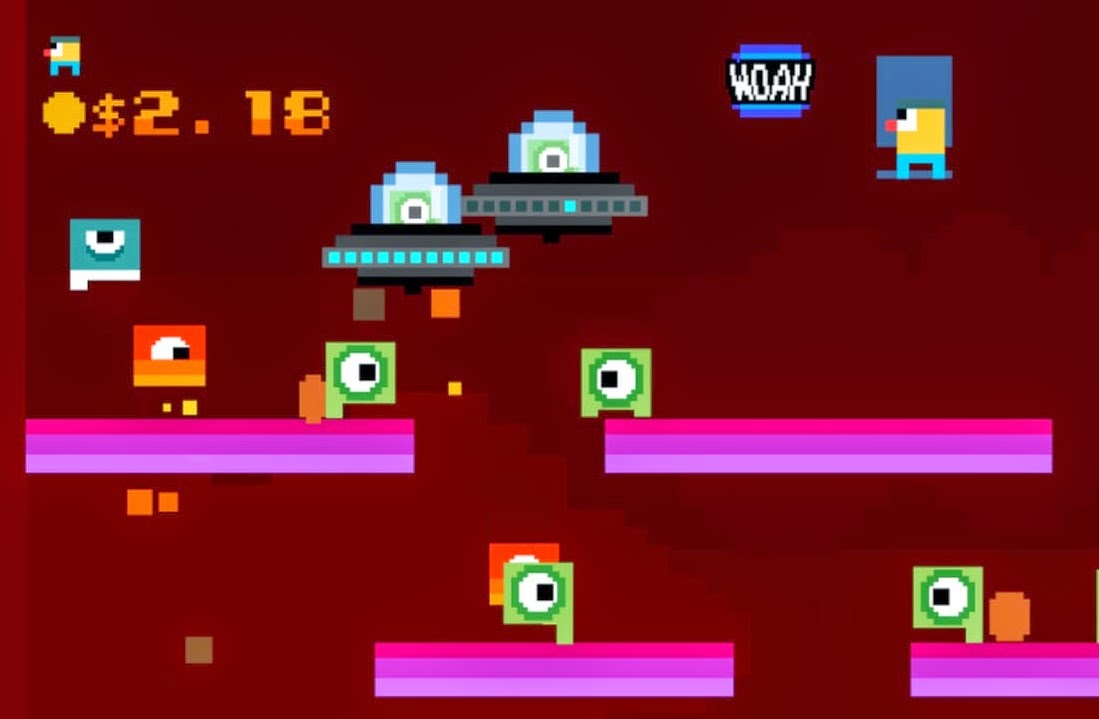 I honestly believe that games are headed to a period of amazing creative development. Completely liberated of technical limitations, and having access to tools like Unity, game developers are creating stories that are deeper and more personal. Gameplay is becoming richer and more refined. The quality of art and design is escalating at such a rate that it’s difficult to tell the difference between games made by one or two people, and the biggest of blockbusters.
Games are growing as an art form, as a creative endeavor, and as pieces of entertainment. And then there’s Woah Dave! Woah Dave is nothing.
As you can tell from the screenshots, Woah Dave! is a deliberately retro game, where you’ll take control of Dave (or one of his blocky, indeterminate friends), and then jump around a single-panel stage. The game is a riff on the classic Mario Bros. arcade game, in that you need to stop enemies moving from the top of a level to the bottom (if they get there they’ll bounce back to the top faster and angrier than before). In Mario Bros. you would stop enemies from headbutting them from underneath, flipping them over, and then you’d run into them to knock them out of the level. In Woah Dave! you pick up skulls and hurl them at the enemies instead. You need to be careful, because those skulls can explode and knock Dave, but otherwise the games are the same, and you’ve got three lives to knock out as many enemies as possible and collect as many coins as you can. 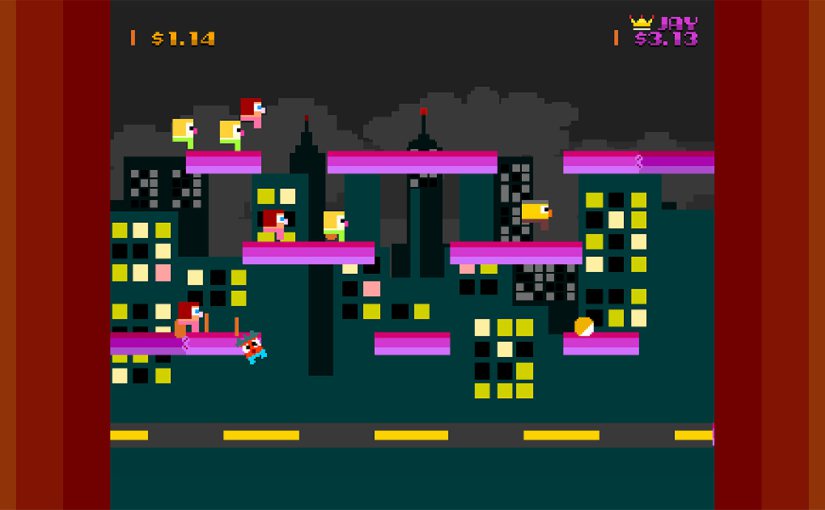 There are a couple of different stages, and these offer a couple of different tricks to contend with. One level has warp portals. Another has moving platforms. The game gets fast and frantic as the enemies build up, and getting a good score certainly takes skill. A split-second sense of timing is key to big scores, because enemies will come from all sides, and you’ll need to be able to snap up a skull and hurl it to take out multiple enemies at once a millisecond before the skull explores. There’s a risk/ reward mechanic in there, and I’m sure there are some people that will become completely hooked on the rhythm of the game.
But that’s all Woah Dave! is. It has barely more content than a game that was released decades ago does. The unlockables are minimal, to say the least. It plays well, with responsive controls to facilitate pixel-perfect movement. It’s brightly retro (sickeningly so, really), and there’s a two player mode for a bit more fun on top of all that. But modern retro games really need more than that. Consider Rogue Legacy or TowerFall Ascension; these titles take a retro-themed aesthetic and core gameplay and then build on it to offer something on top of that foundation.
As a completely free game on PlayStation Plus, Woah Dave! is brief, throwaway fun. There’s nothing wrong with it, but its sheer lack of content means I wouldn’t want to spend anything on it. I wish I could say more about the game, but I’ve already offered more content in this review than is on offer in the entirety of the game.