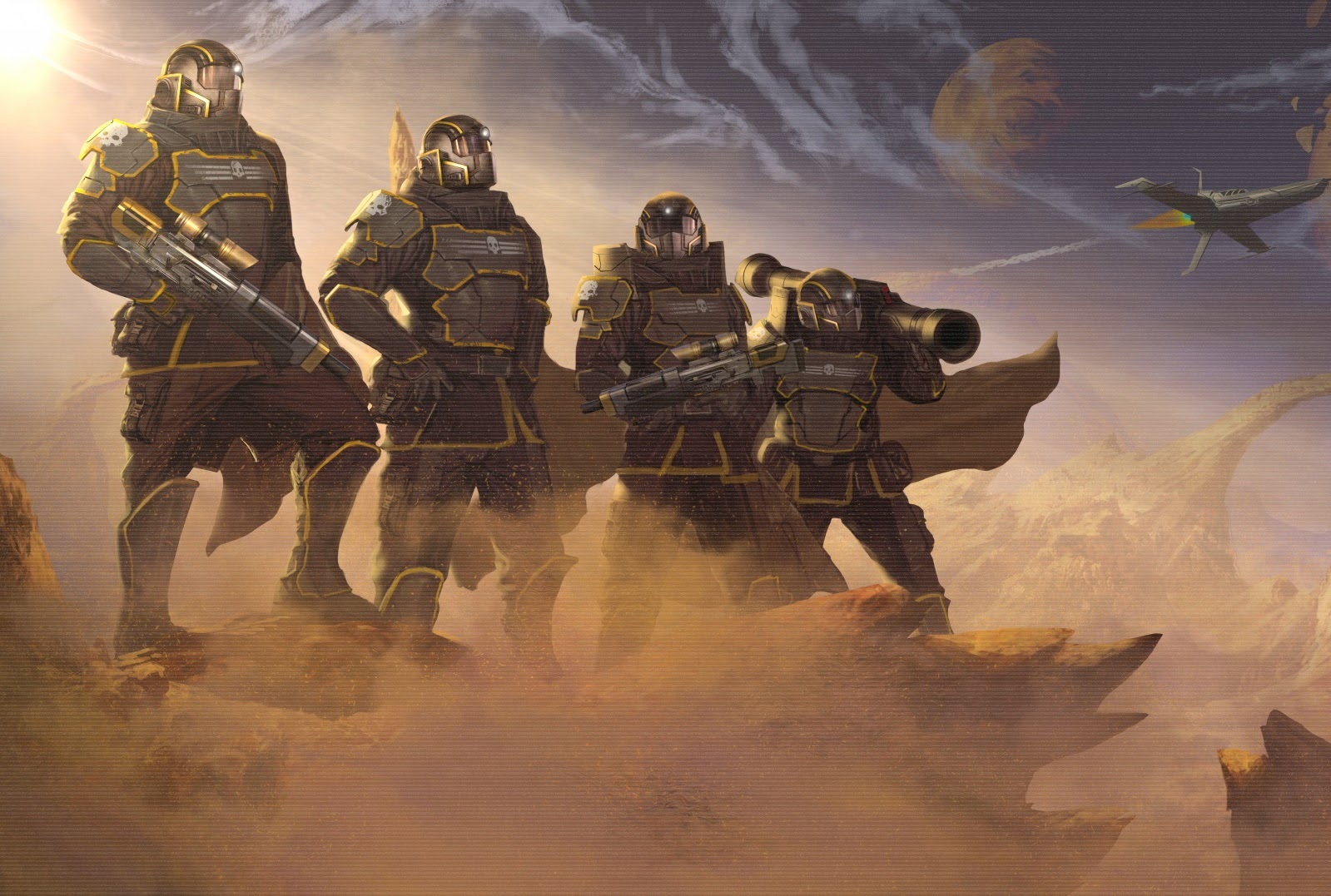 Helldivers is a brutal action game that will no doubt frustrate some players while sparking plenty of competitive (and friendly) fire for others. What looks like a simple top-down shooter shows that it has a lot more depth that one might think at first blush. Strategy elements, good controls and chaotic gameplay help to offset middling visuals and some unforgiving difficulty spikes to create a memorable cooperative experience.

Of course, you do not have to play Helldivers with other players, but you absolutely should. In a single player game, you have more control over the battlefield. You are responsible for your own stealth tactics. You have access to the equipment and drops on the field. You can do your best to dictate the flow of a given level, but Helldivers really shines when it is more chaos than control, and multiplayer brings this out in spades.

A large part of the potential hilarity and challenge found in multiplayer comes from the constant threat of friendly fire. You can (and likely will) shoot your comrades. And if not, they’re just as likely to be at risk from strategems, which are ordinances you call down that range from explosions that can take out everyone nearby (including yourself) once armed, to turret guns that will just as happily shoot allies as anything else, to new ammo and more. 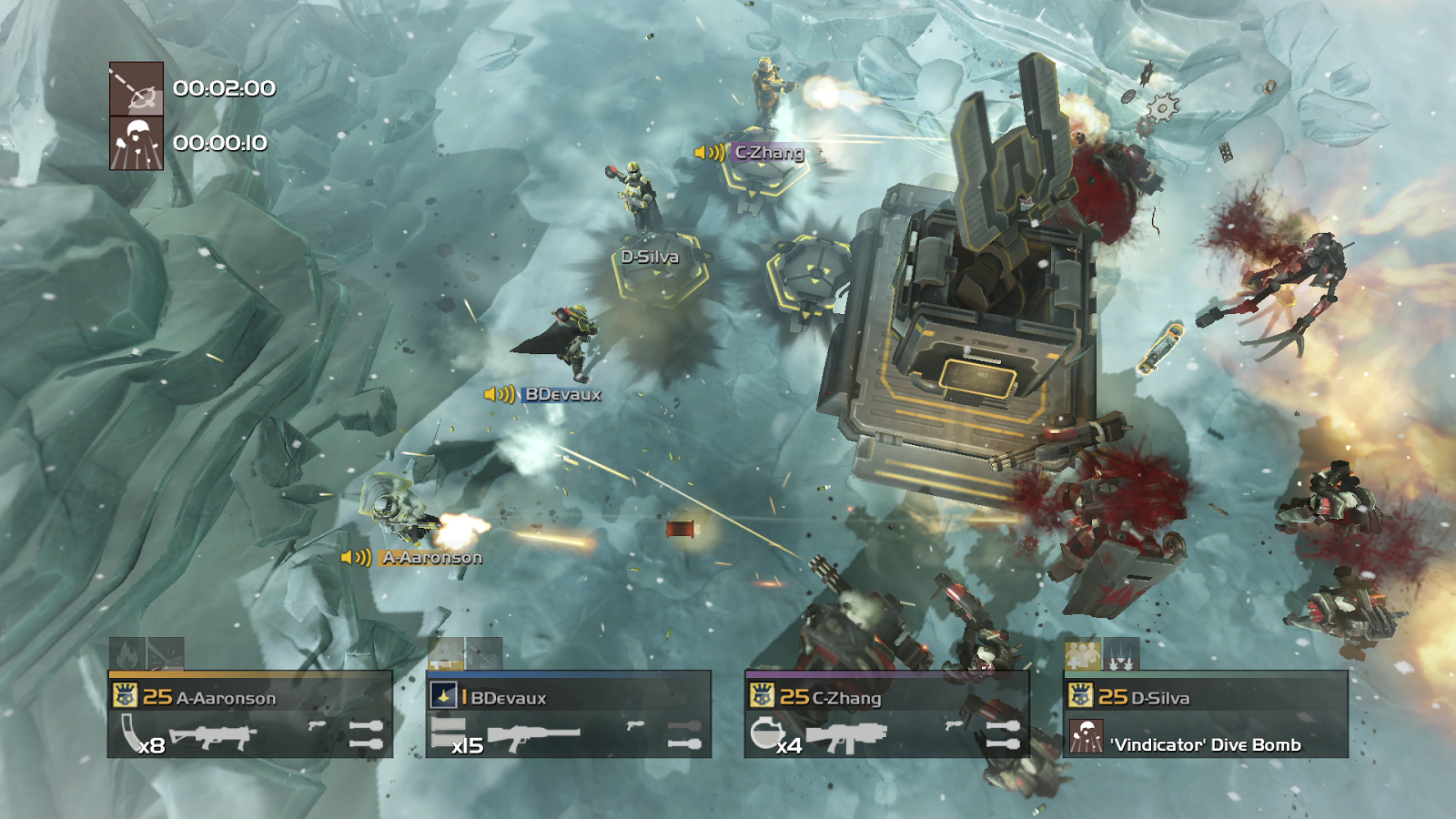 Calling the strategems down during combat is a minigame in and of itself. You need to hold down the left shoulder button while using the directional pad to input a series of specific directions to trigger them. When you are being flooded with unfriendly fire, this is not an easy task. Let me just say that Helldivers is unforgiving and it cackles at your demise. This makes the offline cooperative play with friends and family more memorable than the online where you never quite know what kind of a player you are going to get teamed up with. I rather enjoyed taunting my teenage son when my re-spawn pod drops right on his character. Rest assured, he laughed just as much at me when the escape ship at the end of the game landed on my character, taking him out in turn.

Things kick off with a streamlined, effective tutorial. You will learn all you need to about shooting, aiming, switching weapons, going prone and calling down ordinance in around ten minutes. When it is time to actually compete, you will be able to drop your team pretty much anywhere you would like in the field. Maps tend to be large, and objectives often require players to juggle multiple needs at once. So for example, in the first stage, one task is to hold off waves of enemies while inputting a sequence of codes. Positioning your starting location is key, because starting too close to an objective might land too close to where enemies are clustered, but too far can slow down your potential progress. When finishing the level, the team needs to reach an evacuation point. Once there there will be a couple more waves of oncoming enemies to deal with until the ship lands and carries them away safely.

All of this combat is woven around an interesting territorial system where successful missions take real estate away from the bugs threatening Super Earth, which they are also capable of taking back. The idea is that teams of Helldivers need to eventually clear a path to the bug home worlds where the intensity really ratchets up. Thanks to this dynamic approach to progression, it does feel like victories (and defeats) do matter in a science fiction tug-of-war context. The sense of progression is further enhanced on a few fronts. As you take over more zones and gain greater experience, different unlockable items become available. You can change your character’s appearance in several different ways and there is a pretty substantial arsenal of weaponry to be found. I really liked the different strategems, but I wish they were better explained – at times I would purchase one with my hard-earned points but not really know what impact it would have until I used it in battle. As a result I blew my hero up a few times simply learning what the different strategems were capable of doing.

Presentation is a missed opportunity. There are plenty of reds, greens and whites to show off lava, forests and snow – but functionally there is little to no difference in any of the environments. It would have been nice to see the developers dig deeper into these different landscapes to try and create more variety.

Helldivers offers plenty of challenges and a great excuse to play with others, and that is when the game is at its best. There is a nice campaign built around the carnage that offers a sense of accomplishment, too, that makes the difficulty worthwhile.