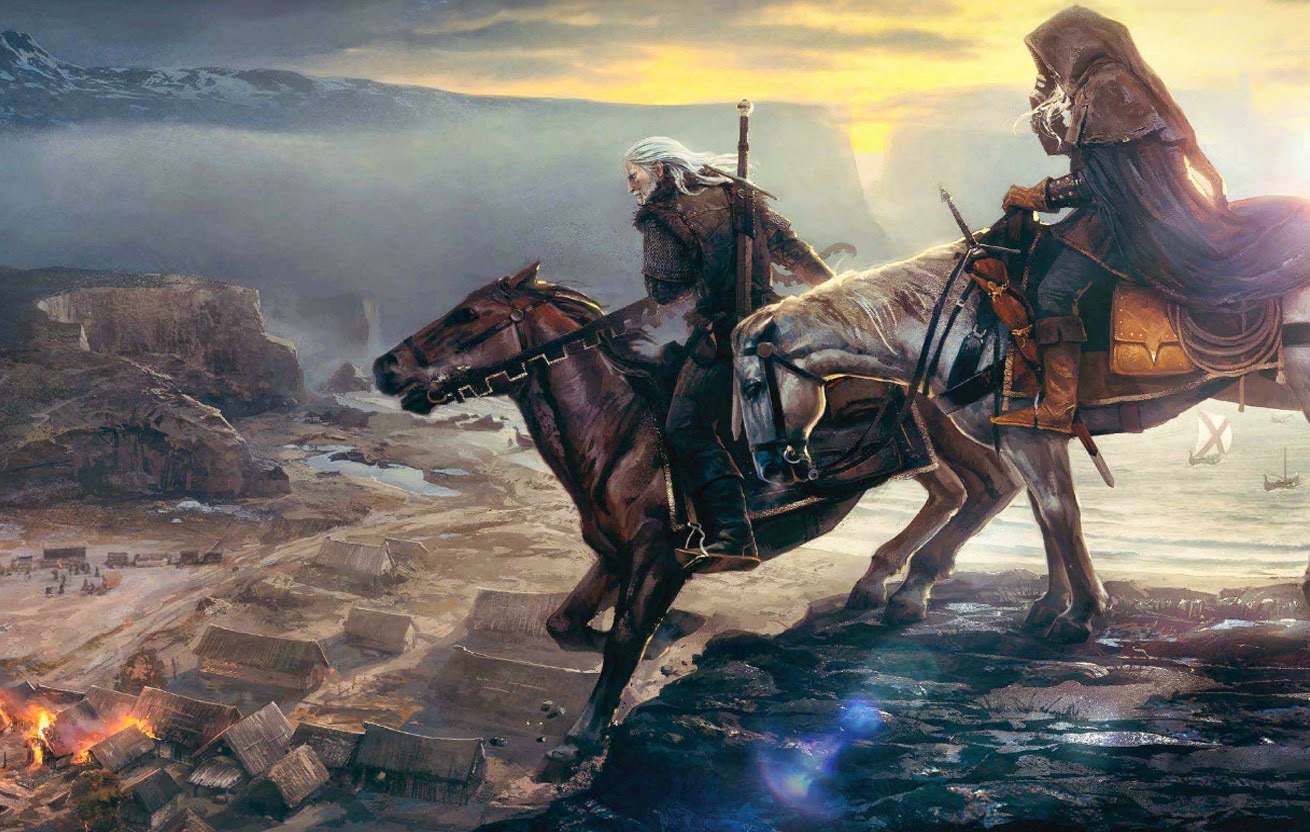 Without a doubt one of the most anticipated games of this year is CD Projekt Red’s The Witcher 3. We’ve already had some hands-on time with the game itself, which we absolutely loved, and while there’s a while to wait before the game is released, thanks to CD Projekt Red’s commitment to shipping a complete product, we’ve got a new interview for you to help whet your appetites just that little bit more.

We sat down to have a chat with Damien Monnier, senior game designer at the developer, about some of the features in the game, and what to expect. There’s a little exclusive announcement in there, too – check out the second question to see how the loot system will reward players who go chasing items that they’re not necessarily at the ‘right’ level to chase them down.

Digitally Downloaded (DD): The game levels the main character independently of fixed level enemies in the game. This creates an uneasy tension in the game that centres around straying away from the main path as players will encounter over-powered beasts based on location rather than story progression. How do you encourage diverging from the main narrative, when at times safer players will not want to risk confronting higher level enemies?
Damien Monnier (DM): Basically, yes we do encourage people to go out there and see what might be in a field at night or in a cave and so on because at the beginning of the game we teach you that if you go explore, you will be rewarded with loot and unique items, as well as unique experiences by interacting with NPCs that are not on the main path. Having said that, whenever you encounter an enemy, most of the time you are able to run away. There’s no shame in running away. So you can just get out there, and if it gets dark maybe wait a little bit or carry on if you feel adventurous but we don’t slap you across the face as soon as you go explore, you always get a warning. 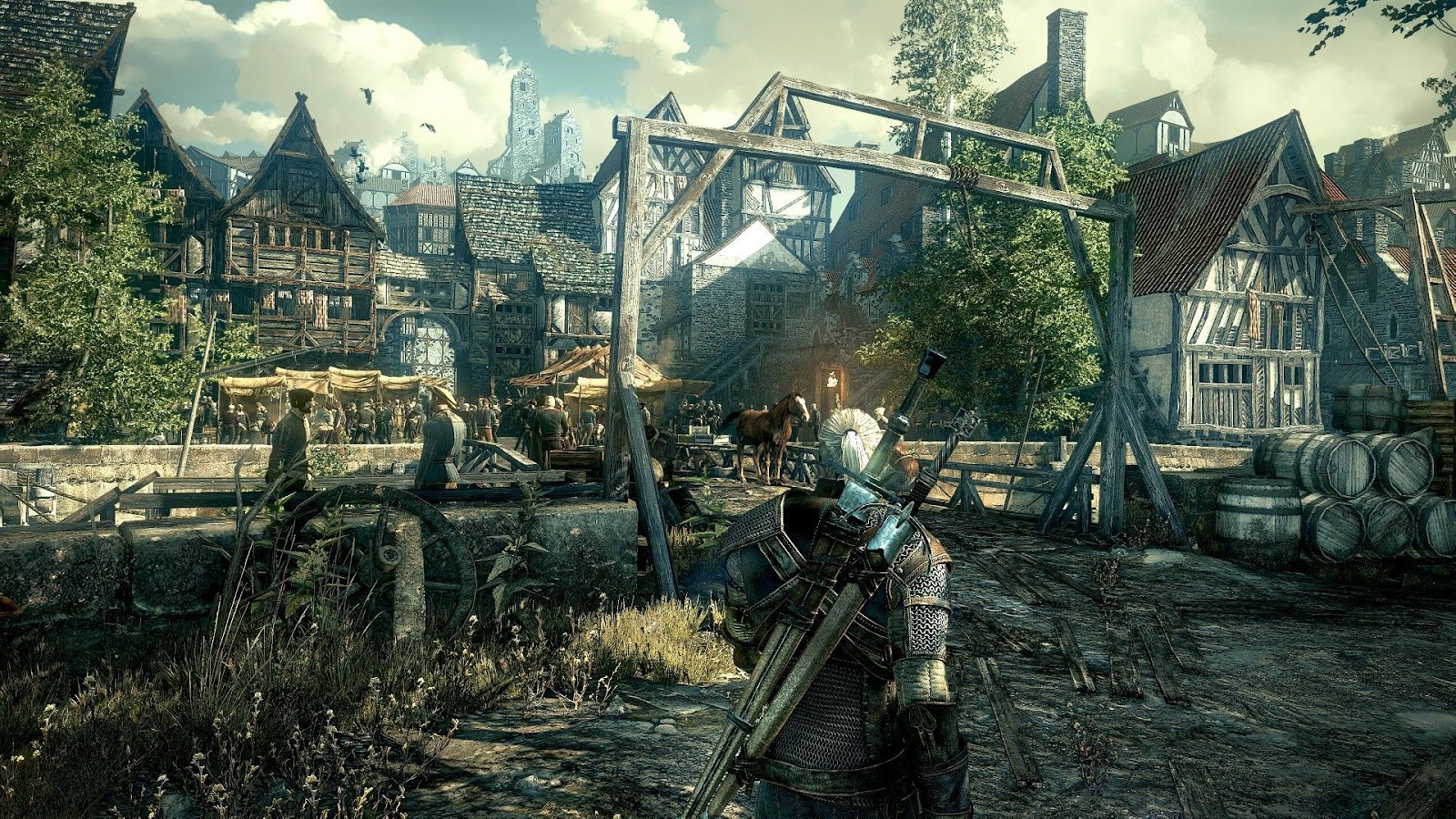 Even with creatures like wolves for example, without getting too technical, there is a radius around them and when you enter that radius some of them will start growling and warn you that you are getting too close. If you move away they should leave you alone, but if you keep walking towards a wolf you will hit another radius around the creature that says, ‘okay, go attack him now’. That system is in place with most animal/ creatures as to give you a warning so you don’t just aggro half the map when all you wanted to do was pick up a flower for a potion that just happened to be in the middle of the swamps.

DD: What reward incentives are there for tackling higher levelled creatures at lower levels?
DM: Basically since our monsters don’t scale with you, if you go fight a monster that protects a chest (very RPG, but just an example). and you manage to kill the monster, you have access to the chest. At this point, in some cases, but not all, the chest will have some info from the designer that will say, for example, “there is a sword in there, it’s called this and that, and it is epic”. The stats from the sword will be scaled automatically to fit your current level but be super-powerful still. That’s pretty cool because you are rewarded with a very powerful sword, instead of having something on you that is brilliant but that you cannot use until you’ve levelled up more.

In some cases that’s still the case; we don’t auto-generate everything, but in some cases we do and it’s pretty cool because it guarantees an awesome piece of gear that you’ll be able to use instantly. You don’t want to feel like you should have waited to earn the item – the point here is to make you keep going so that you always get better and better instead of aiming for that one legendary sword (I keep saying sword but it’s for armour too and other things). 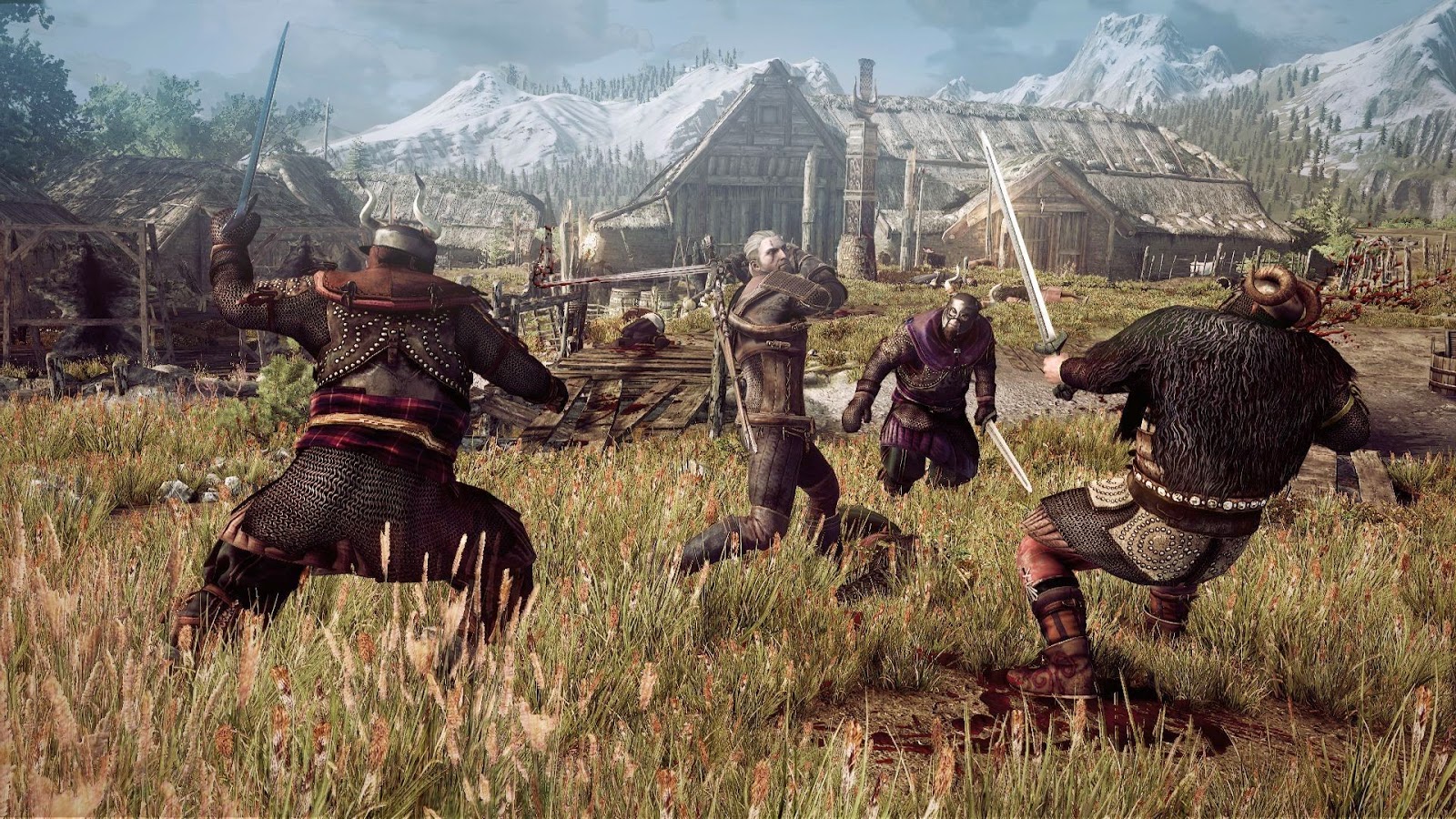 DD: How do you prevent players encountering certain spoiler reveals, before the story or the player is ready (in terms of narrative) for them?
DM: The main story will wait for you so you can go and do sidequests and so on. However the way you choose to complete certain sidequests will affect the main quest, or at the very least people will talk about what you have done (in some cases they will get it wrong and as we’ve worked in a system of Chinese Whispers into the game). It’s all seamless, as there is a lot going on and I cannot think of a way our last act of the main story could be spoiled by anything in the world.

DD: I understand that The Witcher 3’s multiple game states can unfold due to player agency and that there is a more subtle and unseen Butterfly Effect-like consequence on the world’s narrative progress. How does the open-ended and multifaceted approach to storytelling affect the designing of the missions?
DM: Basically, imagine a massive tree with a lot of branches. And one man keeping an eye on all the branches. That’s our lead quest guy, Mateusz. So, and I need to keep the imagery going here, he will look at branches and see his quest guys branch out, and out and out. At which point he will see that some branches are close to others and he will suggest that quests are affected by those choices (in some cases opened or closed off totally) and it’s the same for the main quest.

The number of branching out is pretty much dictated by time and manpower. Each quest requires at least one writer, one quest designer, one environment artist and our localisation/recording team. Five people bare minimum. Some need a lot more and will go through massive changes. Sometimes people see down the line that a quest simply doesn’t make sense anymore or it’s not to the level of the others, so they get reworked. So basically whenever it becomes too big or too complex, we say “stop”, or we cut it altogether. 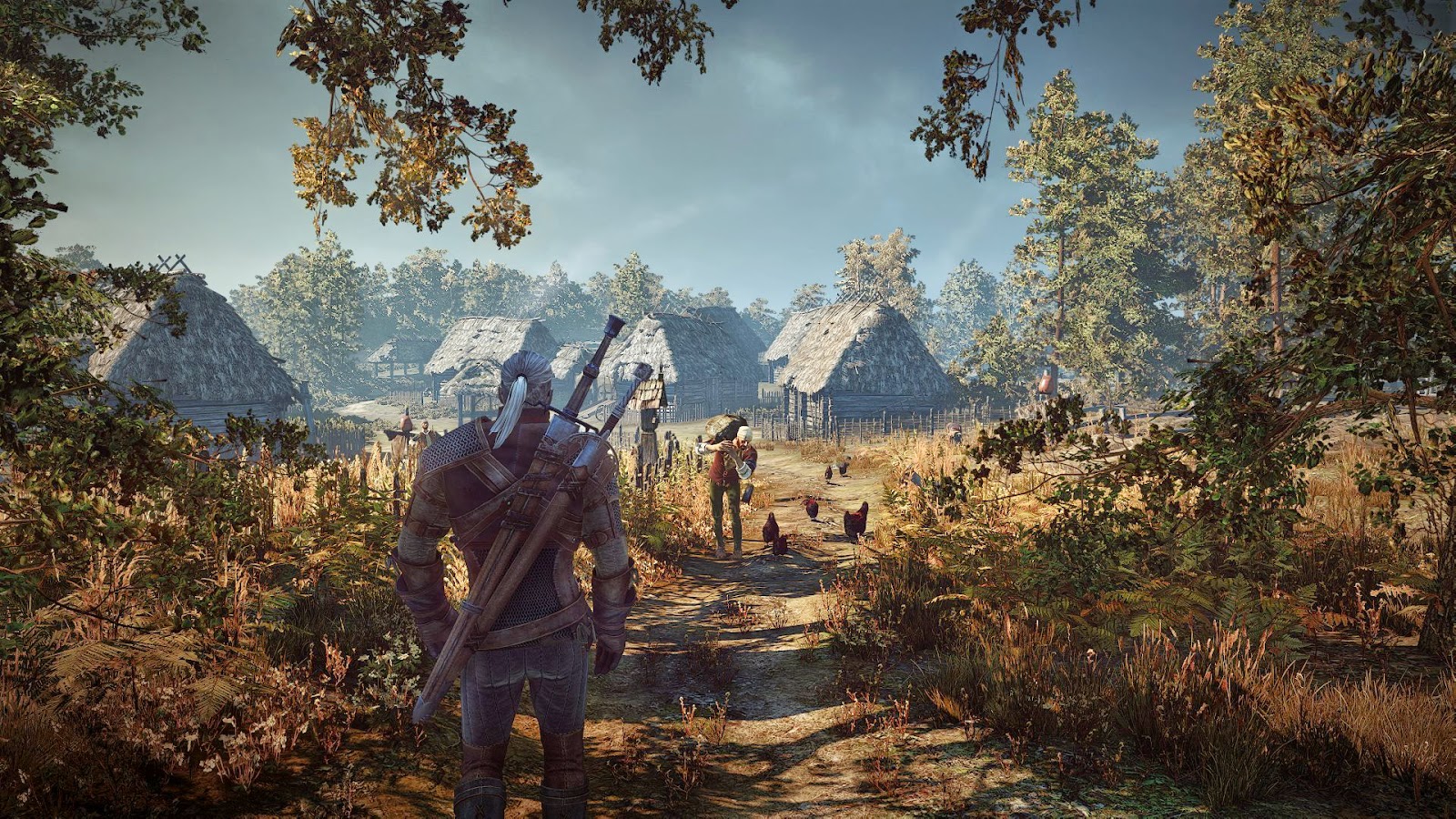 As far as the number of endings, they are all affected and dictated directly by some of the choices you make during the game. I think we have 35+ endings. I’ve asked specifically to be out of it so that I can play the game and have no spoilers. As a gameplay designer I wasn’t required for the last cutscenes and so on so I’ve kept some surprises for myself!

DD: The combat mechanics look extremely nuanced; especially the use of magic which has a dynamic effect on the environment (ripples in the water, singed burnt grass) as well as on the enemies. Will there be a chance to focus on the specialisation of magic skills in the game, and how does the mind control spell affect different enemies?
DM: You can focus on spells (we call them signs) if you want. They can become pretty powerful. The Axii sign, which is the mind controlling one, can become powerful to the point where you can put a lot of enemies to sleep at once, or you can also use it during dialogue scenes like a truth serum or in a way to calm people down.

You can also use it on animals if you want. For example, your horse freaks out when monsters come by, and we have a horse panic level mechanic. However staying on your horse is pretty good because the damage you do when charging with your sword is multiplied so you will often want to stay on your horse. If the horse panics too much he’ll kick you off. Use Axii on him and that will calm him enough for you to do a couple of charges maybe, and chop a few heads off. 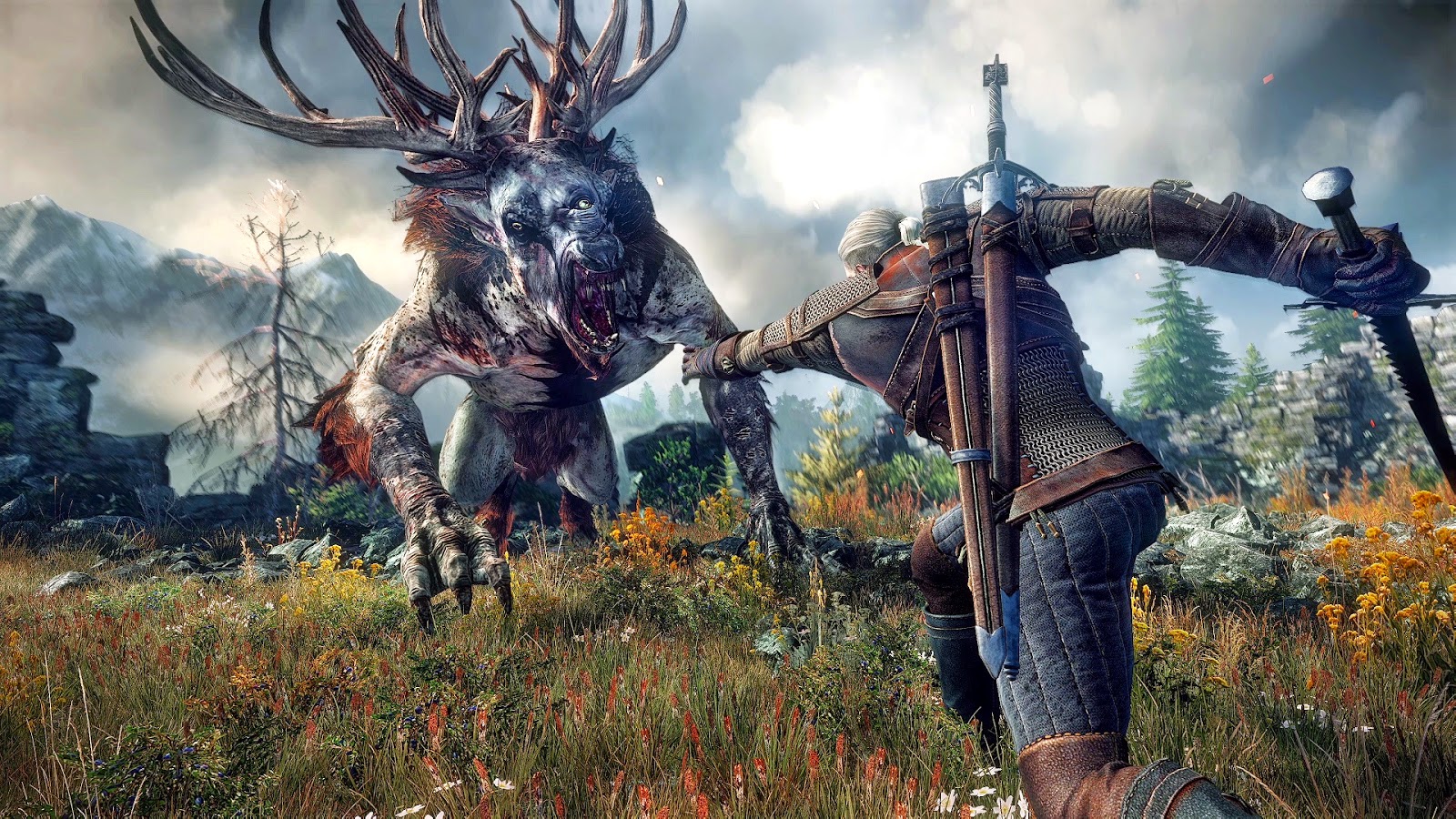 And if you use Axii on sheep they will think that you are the ram and follow you around for a little bit. It’s totally pointless but I love it so I put it in the game.

DD: Lastly it was a pleasure to be filmed as part of the audience encouraging CD Projekt RED with support of the project. With the deadline of retail release so close how easy is to ascertain the enthusiasm for the project as a result of the significant delay?
DM: We’re all super tired because we really gave it all. This is the most important game of our studio’s history, and for most of us, the most important game of our careers. I get to do a lot of trade shows so I meet the fans, and I meet more and more fans with every trade show. I come back to the office and I will say to the people in the team “you guys have no idea how popular we are now.” Even as recently as E3 last year very few people knew who we were, and I would have to explain what a Witcher is and so on, but now I have people stopping me and saying “hey, you’re the Witcher guy!!!”

It’s surreal because we’re still a fairly small company from Poland, and we’re still the underdog. And to be honest with you this is where I think we belong and where we should stay; we should stay humble and keep making awesome games and not let it get to our heads not matter how popular we end up becoming.

Impressions: Final Fantasy XV; this game will restore people’s faith in the franchise