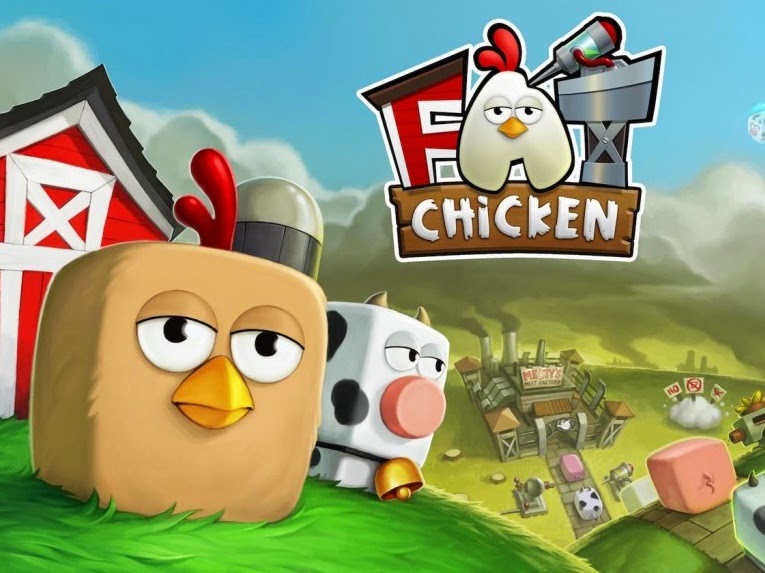 If there’s any question whether the gaming industry has lost some of its forward progression momentum into a viable artistic medium, you can point to the debacle now known as ‘Gamer Gate,’ and the fallout of that across the entire industry.

Thankfully, the appropriately named developer, Relevant Games, is one of many causes for hope yet, with its quirky and entertaining activist title, Fat Chicken, rife with unpleasantness, yet shrouded in playful cartoon whimsy. Underneath its colourful canvas lies a filthy stench and the smell might, in fact, might not be too far from home.

Before digging into the narrative complexities of Fat Chicken, I want to quickly discuss the gameplay side to get things started – like what’s found in the game, things will inevitably blend together. What we find here is a little like a tower defence game that tasks the player with trying to keep consecutive waves of animals alive during their short life span from the barn to the slaughter house. Instead of building towers to destroy incoming enemy forces, here they provide feed, water, antibiotics and even growth hormones all in the name of maximum profits. 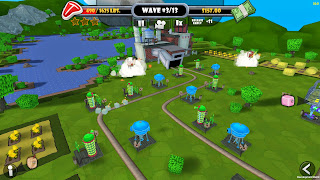 Relevant Games has done a fine job balancing of the strategic game play elements, allowing enjoyment for both newcomers and genre veterans alike. Each location within the campaign offers two missions, with the opening assignment allowing leniency in how the player tackles the situation and utilises the new elements thrown into the mix. The following assignment amps the difficultly up significantly and not only requires thoughtful strategy, but demands it. For example, one might desire to simply spread out water and feed towers on the opening waves to acquire funding at a moderate pace; others might desire fewer, yet more expensive and efficient towers early on, while paying a small fee to relocate the towers in real-time, to maximise overall profits. Micromanaging in this latter manner is possible with the ability to speed up or slow down the game speed at will, but even at the slowest speeds, when trying to manipulate towers across multiple lanes is always risky business – one simple mistake risks losing a whole line of livestock (and profits) to hunger, dehydration or even an illness.

Incentive to achieve the highest rank per assignment – a maximum of three stars per level – is intuitively found in the ability to spend acquired stars on permanent statistical boost to towers and allied forces, which are applied across the entire campaign. These minor statistic increases find noticeable results when replaying levels, encouraging players to tackle the more challenging levels with everything they’ve got. Even for one not especially prone to genre, I couldn’t resist the urge the gain those additional upgrades time and again, finding replay value cutting through even in the early stages of the game.

The satire in Fat Chicken comes as quickly as it is thick. The comical writing style and zany character cast find the openings acts humorous and playful. At first glance, Fat Chicken is aesthetically reminiscent to other notable farming titles like Zynga’s Farmville, but the act of sending these cute animals to their slaughter starts to catch a nerve, even with a person of a more conservative ideology such as myself. Having already studied and made thoroughly aware of the atrocities of mega factory agriculture: Confined Animal Feeding Operations (CAFO), Genetically Modified Organism (GMO), agricultural waste, growth hormones, etc., which are all detrimental to worldwide human, animal and environmental health – having to utilise many of these questionable elements to maximise profits in-game tacked a nail in the coffin, so to speak. Recalling that the in-game currency is called ‘MurderBux’, well, let’s just say that tacked the nail in a bit deeper, but it was drove all the way home once the Genet-O towers started mutating animals with extra appendages and Slaughterhouse Draggers began collecting and adding dead animals to the overall quota as well. 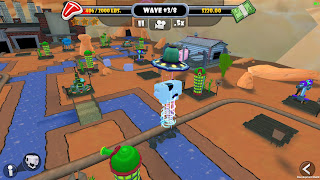 There’s a fine balance that must be found when running the risk of pushing players over the edge with disturbing content in a video game, but Relevant Games’ weighting of the serious underlining narrative, and the satirical cast and art style together is nothing short of commendable. Intentional diversions like environmentalist protesters disrupting tower production – deploying robotic media drones to enlighten the world on what’s really occurring on the farm – are a great example of just this. Also, it appears that alien life forms have a certain affinity for the taste of beef like us humans and they come whirling into the farms by way of UFOs with nothing but abduction on their minds. If there’s an alien portal in sight, a farmer with any common wits will always arm their farm to the teeth with aerial defences. It’s these types of zany elements that keep the game play elements of the game focused, but the underlining narrative always finds clever ways to seep right back though – never spoiling the fun though.

See, there are some type of video games that are great evening events with friends while tossing a few burgers on the grill. Fat Chicken would rather make you think about what happened to the cow (or chicken) before it became your burger on the grill – while still offering up a comical, satire filled reverse tower defence video game to enjoy all evening at the very same time. An enjoyable video game that starts a healthy conversation about real world issues is to be commended – the gaming industry is all the better for it too.