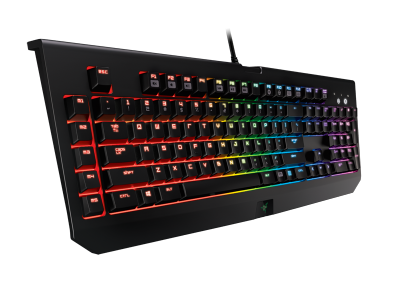 If there’s one thing I’ve learned from gaming hardware, it’s that gamers apparently like glowing stuff. It’s as though the entire industry is so keen on recreating the world of Tron that even headsets, which you can’t actually see when you’re wearing, have glowing versions.

Beyond the fact that it’s indirectly suggesting that we conform to that myth that we’re basement dwellers clicking away on buttons in the dark, I’m not suggesting that Tron-style is a problem, just that the industry’s love of glowing stuff is a little excessive. And in that context the BlackWidow Chroma, which glows in every colour in the sun, is very excessive.

But it is a sight to behold. It’s possible to set the keyboard to cycle between 16.8 million colours (according to Razer). Just watching the keyboard seamlessly ease from one shade of colour to the next is a feast for the eyes, it must be said. It’s completely indulgent, as it doesn’t actually add anything to any game you might be playing, and you won’t even notice it most of the time, given the purpose of a keyboard is to type on, not look at, when you’re trying to play a game, but it is a neat party trick, and it’s almost worth buying one simply to show off.

Beneath the hood, the Chroma is a highly functional bit of equipment, so buying one isn’t just for vanity anyway. Razer makes a number of claims about the keyboard: it apparently has a faster activation point than other mechanical keyboards, meaning it offers faster response times for those games where absolutely precision are a necessity. The technology within the switches also means that the keyboard will survive around 10 million more keystrokes than other keyboards (which already last an incredible length of time thanks to the robust technology that supports them from all m). I can’t vouch for the increased speed as I’m not a professional gamer so any speed improvements largely goes unnoticed with me. In fact most of the games I play on PC (Europa Universalis IV, for example), don’t exactly require speed and precision. I also didn’t exactly have the time to test that 10 million additional keystroke claim in the time I had to test the keyboard.

But what I can say is that the Chroma is an enormously comfortable keyboard to use. I have a very fast typing speed in excess of 100 wpm, and I noticed a distinct improvement in my typing speeds thanks to the keyboard. The keyboard I tested used Razer’s green mechanical switches, this is a clicky key that requires 50g of force to activate, and that’s slightly more than some keys. It’s not quite like typing on air, in other words, but it’s light and ergonomic.

As you’d expect from a gaming keyboard, there are the usual bevvy of other features, such as macro keys, audio-in, microphone-out and a USB passthrough. Keys are also fully programmable, so it won’t be hard to set yourself up for your favourite games. As with all modern Razer products, the Chroma makes use of the company’s proprietary Synapse software. It’s a little annoying having the thing pop up and demand you sign in every time you turn the computer on, but it’s not heavy software and there is the added benefit that it saves your settings to the Cloud, making it really easy to transfer your favourite settings to a new or multiple computers.

The only real issue is that Razer already has great keyboards on the market, and it’s hard to see rainbow colour options to be enough of an innovation to upgrade if you’ve already got a gaming keyboard. That’s a compliment to Razer, and I am certainly comfortable with recommending Razer over most other manufacturers when it comes to a keyboard both for gaming and typing, but the company does need to come up with a more compelling proposition if it wants its existing fans to upgrade.