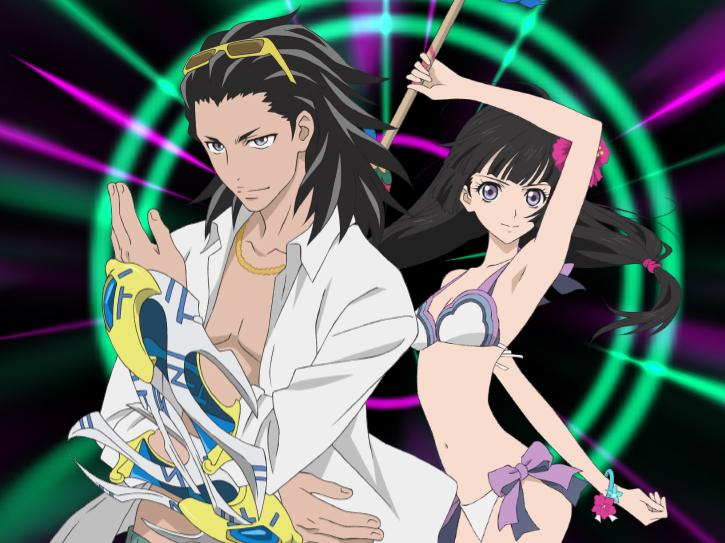 Tales of Hearts R is a classic JRPG in every sense of the word. From its endearing if overly familiar characters, through to a story arc that is less than fresh, random battles and a somewhat mash-happy combat system that could have used greater strategic nuance.

However, where Tales of Hearts R succeeds is in telling a story that is more intimate than some of the grander fare we have seen from the series in the past and creates an experience that is a sum greater than its parts.

Forgive me if you have heard something like this before. A mysterious boy and girl wash up next to one another by a small village located next to the sea. A wise grandfather taught a strong-willed young man named Kor Meteor who takes it upon himself to help the siblings escape a witch and restore the Spiria (soul) of the young lady, Kohaku Hearts. This leads the group on a grand adventure across various lands in search of the shattered Spiria parts so that Kohaku can regain her emotions.

(If you’re looking for more Tales action, then the two Xillia games might be for you) 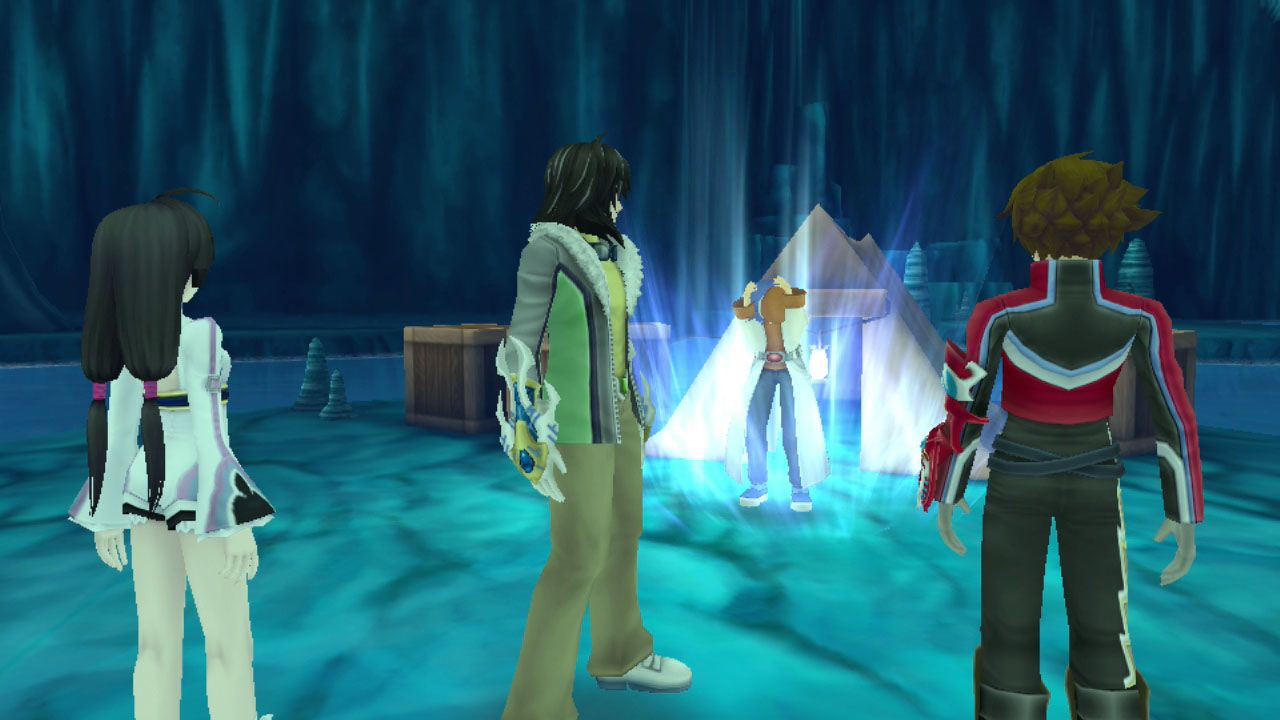 While many of the Tales games take on huge story arcs, the adventure within Tales of Hearts R is much more personable. There is a genuine sense of progress with each of the major players as the plot progresses at a respectable pace. Because the narrative is literally about recovering emotion there’s a nice warm and fuzzy feeling that you’ll develop as you watch Kohaku develop her personality – a cheap but effective coming of age story if ever there was one. There is a backdrop of war with greater bodies of people at odds with one another, but it only serves to accent the nature of the personal tale more effectively. All of created a narrative that I found myself caring about more than most games.

A little like Persona 4, one of the core themes in Tales of Hearts R is confronting unpleasant sides of yourself realised as literal dungeons and bosses. The dungeons themselves were nice, albeit quite linear, and the boss battles were impressive, but it must be said that were Persona 4 uses this structure to load on rich narrative themes and build a connection between players and a deeper side of the characters, Tales of Hearts R opts for a more simplistic approach. It’s still enjoyable and a nice way to represent characters as the game is being played (as opposed to overloading the game with cut scenes to tell the same depth of character), I can’t help but think there was something of a missed opportunity there in how underdone the theme is.

The familiar narrative tropes also hold true in the game’s various mechanics, ranging from randomised combat, overworld maps and holding useless conversations with the NPCs that populate a variety of different towns. Tales of Hearts R is not a brand-new game, it is a Western release of the previously Japan-only DS title from 2008, and it does play like a relatively old game in the genre. 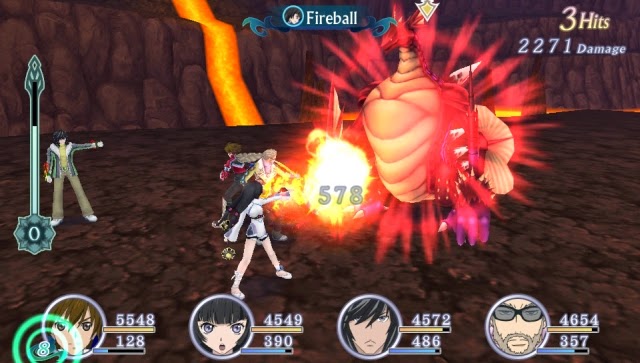 While Tales of Hearts R will not score many points for originality because of the reasons I listed off above, there is something to be said for doing those things well. While lacking more modern visuals (this would have been right at home on my PSP a few years ago) and gameplay options (Bravely Default’s ability to tweak combat frequency for games using randomly generated battles should be used by more JRPGs to make experience grinding easier), the combat proves deeper than it initially appears.

One point that will no doubt irritate some players is the lack of an English dub (that’s better than a game lacking the original Japanese voice acting 😉 – ed). I have come to expect that from many games that are localised from Japan by smaller studios, but the Tales series has boasted many talented voice actors over the years and I for one would prefer to hear dialogue I understand over having to read it. The written localisation was handled very well, but it is disappointing all the same.

The combat itself is a mixed bag. It is simple enough – almost too much so early on. Several hours in, there is a bit more intricacy to the options available to your party however, which makes it more interesting. Positioning characters is an important strategic aspect of the combat and linking attacks is a lot of fun, even though most of the battles can really be dealt by just hitting the X button repeatedly during the earlier portions of the game. However, the combat (more specifically, the experience earned) are a gateway to progressing the character and story. Thankfully there are very few back and forth fetch quests – I almost always felt like the game was making good forward progress. This in my opinion, is when Tales of Hearts R shines brightest: when its primary characters are the focus. 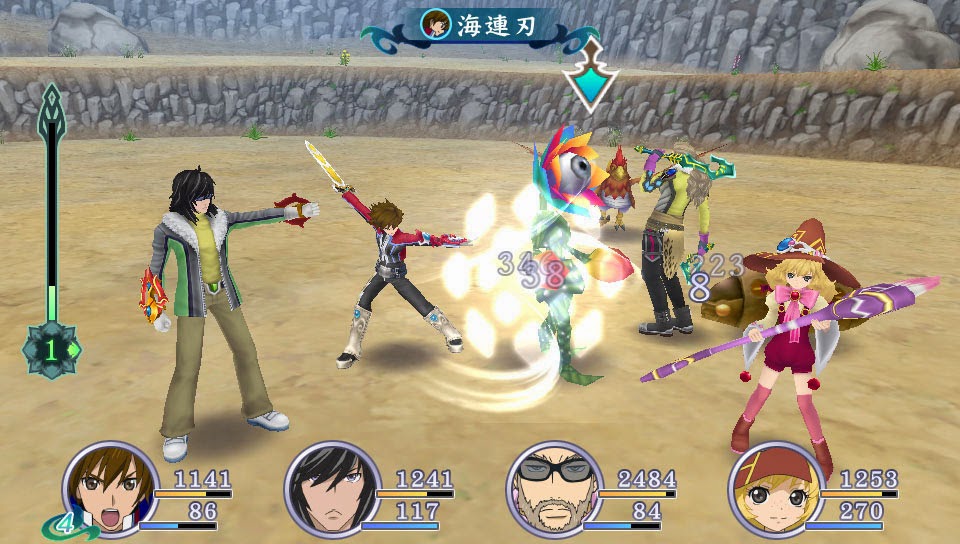 When I started playing Tales of Hearts R, I found myself almost sighing because it seemed so similar to everything else on the JRPG market. However, this sense of familiarity makes the title more accessible to fans of the genre, and the game starts to reveal more of its layers as time goes on. There is a camaraderie for the heroes built around trust and affection for one another that really resonates and gives the narrative a certain warmth that I enjoyed through to the end.