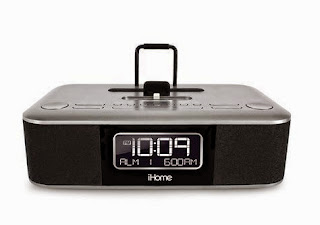 Most of the iHome products do a great job of delivering solid sound with a variety of options, ranging from portable speakers to headsets. One of the recent clocks I got to try, the iB180 alarm clock, had some cool features but underperformed in the sound department and just did not quite provide the same bang for the buck I usually see out of iHome products. With the chance to try the similarly themed iDL100, I found myself wondering if yet another clock/speaker would underwhelm or surpass my expectations. I am happy to say it was the latter.

Probably the best feature of the iB180 was the almost universal charging options because it supported USB. That USB charging option is again here, but the target audience for the iDL100 is those using the latest and greatest Apple devices (iPad mini, iPad 4th generation, iPhone 5 – they are Lightning ports). My household has more of these products bouncing around than I care to admit, with my wife owning the lion’s share of them. There is a dual dock, so between the docks and the USB hookup, three devices can be charged at one time. Let me tell you how nice it is to do away with some of that cable clutter on her night stand.

The one drawback is a consistent one I have seen with any i-device docking station, and that is if your phone or pad is kept in a case of some sort, it does not rest on the dock very well. This is more of a problem for the iPhone than the iPad in our house. While we have folio cases for our iPads, they pop in and out quite easily. Also our iPods are case free. Our phones on the other had do have cases. Now, my current case is actually quite slim and it can rest in the dock – I just have to give it an assertive downward press to establish the connection. My wife tends to lean towards these big, rubbery, ridiculous Disney cases that make her phone roughly the size of a laptop (okay, slightly exaggerating there, but still… I hate those things). There is no chance she can dock it with one of those puppies on there and if my case was any thicker, I would not be able to either. 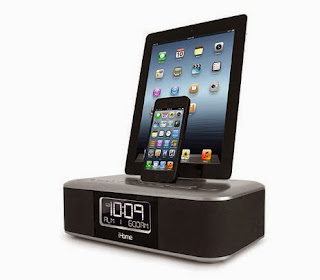 There is another notable hookup in the form of an axillary input as well. This is a 3.5mm stereo port for devices that do not dock like the newer generations of iPad. Anything from a PC to an MP3 player can be used to pipe sound through the system. At its core however, this is a clock. There are several wake and sleep options, form programmable snooze to gradual fading in and out of music for those who prefer a gentler wake-up. It is also worth noting that the programming features carry over to a pair of alarms that can be set in a variety of combinations with your devices, days or the week and time of day to go off.

The buttons themselves are low and on the top of the unit, making them a little difficult to figure out right at first given the number of options, but they are distinct enough with a good deal of spacing between them. The button real estate is less cramped than in the iB180 and provided more options. Because of the wider design of the iDL100, the display is also broad and quite easy to read with variable brightness settings.

While the focus is again on the i-devices (the iDL100 also can time sync to your iPhone settings, keeping it accurate), there is also an FM radio with a half dozen preset options for those who want to wake up to their favourite morning sports show or music station. Another fun option is if your 3.5mm cable is long enough, you can hook up a Vita or 3DS to it and the sound quality coming out of the iDL100 sure beats what those built-in speakers provide, even if it is a foot or two further away. 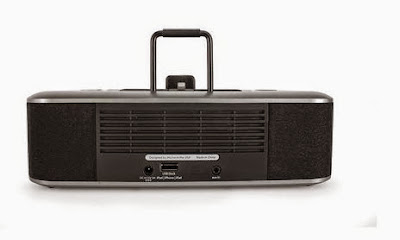 Speaking of music, the sound on this clock radio is excellent. For those used to the rather weak speakers on the i-devices, this provides a great alternative to using headphones in order to get the most of your music. The quality of the speakers here is outstanding, capable of filling a room with rich sound that actually ranges nicely right down to a respectable bass for such a small unit. The sound levels are also adjustable, allowing you to tweak bass, treble and even 3D enhancement. This actually works quite nicely if you want to watch a movie on your iPad. About my only complaint there is that instead of leaving the iPhone off of the dock and leaving the iPad on, you will want to watch your iPad in whatever folio/case/stand you normally use. That is because the iPad docks vertically in a portrait direction, not landscape.

There are a handful of minor quibbles such as the orientation of the iPad (in case you wanted to watch movies while docked), but they are really very insignificant compared to everything else the iHome iDL100 Lightning Dock Triple Charging Clock does right. For Apple users, especially those with the latest and greatest, this clock was designed with you in mind. Better yet, it still has the versatility to be used with other devices, even if they are not actually docked on the Lightning ports.

This clock can be found here