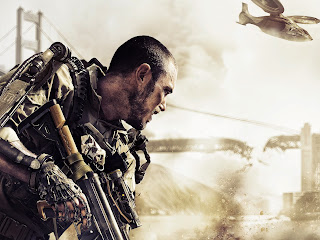 With no Battlefield game on the way this year, Call of Duty gets to be the premier holiday season FPSer. With a new developer at the helm promising a host of new features and a revamp for a new generation of hardware, there was a lot of expectation riding on the game.

And it delivers. At least, in the multiplayer it delivers. Before we get on to that it’s worth highlighting that the single player game is really not that good. Sledgehammer Games and Activision spent a fortune on Kevin Spacey and creating as realistic version of him as possible in the game, but as Matt has already outlined in his review, the single player game falls flat more often than it offers thrills and excitement. Anyone who likes playing games for their story will be disappointed with Advanced Warfare’s offering.

That said people don’t generally play Call of Duty games for the story – it’s all about the mulitplayer action, and the good news is that Sledgehammer Games has done a really great job with finding a way to mix up the core multiplayer experience that fans have come to love, without disrupting the core twitch balance that has made these games so compelling in the first place. 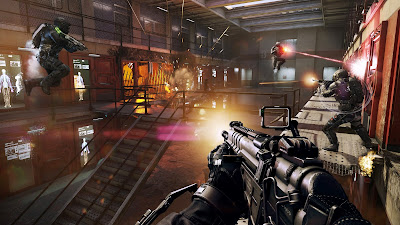 The most obvious inclusion to the multiplayer mode this time around is the exosuits, which adds additional mobility to each player’s arsenal. They’re able to jump and dash further and faster, and this adds some dynamism to the movement around the maps. In the more open areas people leap around with abandon, and players need to be aware of both the vertical and horizontal arena.

This does have some interesting impacts on the flow of battle.  It’s even harder than ever to calmly line up a killer shot. I’m the kind of guy that likes to use the sniper rifle in FPSer games, and the slow rate of fire of a sniper rifle certainly feels like a disadvantage in the open areas of each arena, even despite their added power. That said, each map does have more enclosed areas where I was able to be a more effective addition to the team. Each player is going to find a preferred weapon loadout an role within their team, and with plenty of different ways to mix and match weapons and team builds, I can see this game developing a very rich community around it.

The cosmetic additions to the game are a nice touch too, and an encouragement to keep playing for long sessions at a time. For instance, get a load of headshots in a match and you’ll earn a time-limited helmet. It’ll serve as a warning to other players that you’re hot stuff, but you’ll feel good for being elite. And I can guarantee you won’t log out so long as you’re wearing that helmet. It should help keep the server numbers up, not that Call of Duty is ever wanting for a player base. 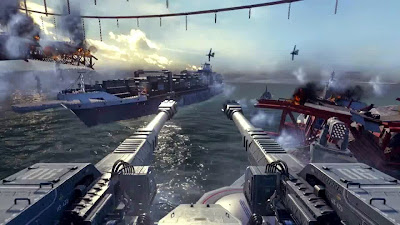 There are of course permanent unlocks to be had as well, and part of the reason that Call of Duty games have been so popular over the years is that they offer a finely tuned progression system that encourages people to play for long periods of time, because they do feel like they’re improving as they play. Then, when they hit the level cap it’s time to get competitive, and Call of Duty has one of the most competitive communities out there. There’s plenty of toxic people to deal with if you play this game, of course, but if you don’t want to deal with that you can always just stick to playing with friends (or the co-op survival mode). If you can handle it, then you’ll easily still be playing this game until next year’s release, especially as new DLC maps start to come into play.

There’s also a couple of new weapons to play with, and Sledgehammer was clearly having fun with the futuristic setting to come up with weapons that look really cool and feel powerful to use.

If I was to criticise anything about Advanced Warfare’s multiplayer, it is that it is quite fast, and the extra mobility makes it feel like it’s getting faster and more reliant on twitch reflexes. While there is a load of skill required to get good at the game, that speed will be intimidating to less experienced players, or anyone who prefers a more methodical approach to their multiplayer action.

Nonetheless, Sledgehammer Gamers should be complimented for coming up with a way of adding to the Call of Duty multiplayer formula without taking away from what made Call of Duty’s multiplayer so popular for so many years.