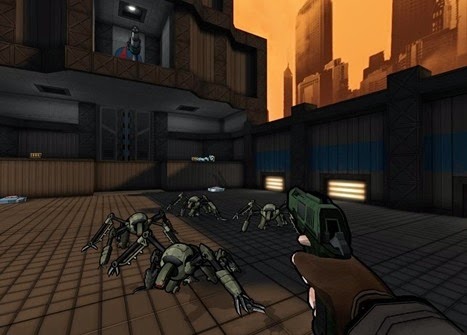 Having spent the better half of a year on Steam’s Early Access program, Wrack has finally made its way to a proper, full release. Billed as an old-style first-person shooter, Wrack follows in the footsteps of shooters old (Doom and Shadow Warrior, just to name a few), as well as new, focusing on frantic run-and-gun action, rather than lengthy cutscenes and scripted action sequences.

And Wrack largely succeeds in this aspect; the game is definitively retro. If you sorely miss the bygone years of speedy running, Wrack will not disappoint. Like similar games, there is a thinly-veiled story that unsurprisingly features aliens, but you’ll be glad to know you can ignore the plot, all the way down to skipping through cutscenes.

If anything, it becomes pretty difficult to continue writing about Wrack without calling out comparisons to the original stalwarts of the genre, because by and large, Wrack is comparable. If I was to try and find some kind of difference to, say, Doom, levels aren’t corridor crawls by any means; once you get past the first level or two, Wrack quickly offers up much more elaborate stages, complete with multiple floors, elevators, jump pads, and multiple paths to trek down. 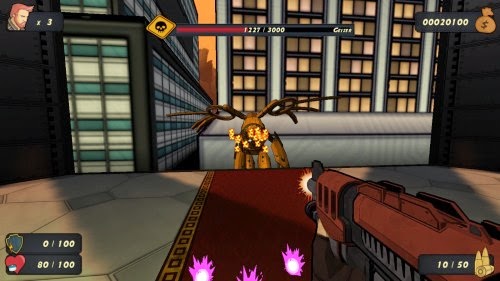 Weapons are standard for the genre, though there aren’t too many to try your hand at. Pulse rifles, shotguns, and bazookas are all present and accounted for, but the most interesting weapon at your disposal is the hyperblade, a somewhat unwieldy yet powerful sword that is always in your inventory. Despite the limited arsenal, weapons handle well, and a combo system that encourages sheer destruction over calculated shooting only encourages you to unload as much ammo as quickly as you can. As expected for a retro-style shooter, health does not recharge in-game; instead, levels are littered with armor and health pickups, along with plenty of secrets to unearth. There’s also an emphasis on speedrunning, with each level ending with a list of statistics and a leaderboard ranking.

If I’m running out of things to say, it’s simply because Wrack is fairly similar to the games many of us have played at some point or another, albeit with a cel-shaded art style and a tweaked combat system thrown in for good measure. I might sound overly dismissive of Wrack as a whole (and I assure you I’m not trying to be), but when it comes down to recommending Wrack, the biggest deciding factor will be whether you’re in the mood for some old-school running and gunning. If you are, and if you can overlook a rather short campaign (though there are DLC levels in  the works), then picking up Wrack is a no-brainer. For the rest of you, well, holiday season is approaching. There’ll be plenty of other shooters to get your hands on.