Second chances are not something that come around everyday. Unfortunately earlier this year, Neverland had to close its doors even after the release of the successful Rune Factory 4. Within the same year, Two Tribes almost suffered the same fate. Thankfully Two Tribes was one of the rare ones to get a second chance, albeit it needed to make some heavy re-workings of the entire studio and publisher. But it’s back, and its first new title since that point in time, RIVE, is being developed by a tiny core team of just three people, who are set on taking that second chance and making it count.

RIVE is a very colourful, fluid, fast-paced 2D action platformer. Players take control of a spider-like mechanical construct which omni-directional shooting capabilities and its human pilot. Having access to shoot in any direction enhances the fast-paced nature and flow of RIVE as players are able to either jump over or run under the multitude of enemies while still taking them out. Alongside the cannons, several different weapon types can be acquired to change things up a bit. Multiple rockets can be used to thin out hordes quite effectively. Enemy shields getting in the way? Launching an EMP blast will take care of those. Having access to these is great, but like all powerful weapons in arcade shooters they come with a limited use so waiting for the proper opportunity is necessary. 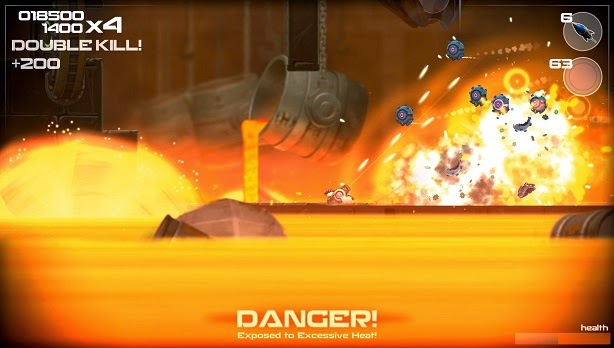 On top of the multiple weapon types, players have the ability to hack certain other robots or enemies, and this will give them access to additional abilities. This comes in handy for a variety of situations such as when low on health or unable to reach a high ledge. While hacking requires some risk, as the character will need to stand still for several seconds, it is a fun mechanic to play around with.

Each level finishes with a scoreboard that displays the total amount of points and time taken to beat it. Other than time, the other major factor in a player’s score are the maximum kill streak and multikills that act as multipliers. I couldn’t manage to get higher than 20 with my time spent for killstreaks, but I suspect people that dedicate time to this game will get really good scores. At first I struggled a little with the controls, but with practice I found myself moving around a lot faster, and I could feel myself getting better, even within the context of a brief preview. I can see this one becoming very addictive for a lot of people.

All in all, between the sleek colourful graphics and smooth gameplay and controls, RIVE is shaping up to be something awesome. Two Tribe’s fresh start is looking pretty good.