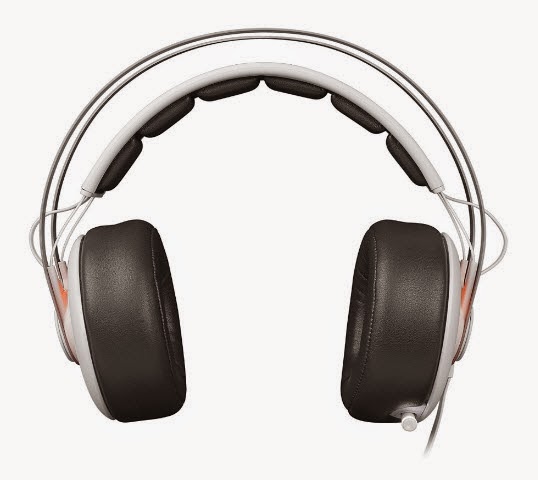 I have had an opportunity to try a good number of headsets recently, but the SteelSeries Siberia Elite Prism Gaming Headset is probably the most comfortable I have worn so far. This is a next-generation update on the popular SteelSeries Elite headset, with some subtle changes and some obvious ones as well. The end result is a nice update on the original.

The pair I had to work with were the Arctic White, which was convenient since the original SteelSeries Siberia Elite were also white. At a glance there are several notable differences between the two models. While the outer earpiece is still white, the actual foam earcups have a nice charcoal grey finish. I found that the white pads on the previous version of Arctic White headset had a tendency to scuff up and pick up colour through lots of use. Here there should be none of that since the charcoal shading is less delicate.

The earcups themselves are enlarged – providing perhaps the widest opening I have seen yet. This allows the memory foam padding to sit around the ear as opposed to on it. It looks a little strange at a glance, but these are imminently more comfortable for hours of use because of this design. They also do an effective job of sealing around my ears to help isolate noise. The audio really stays in the cups well. When my son is using them a few feet away (and believe me, he uses them loudly), I hear nothing leaking out through the foam. When wearing them, meanwhile, noise is not completely cancelled but it is by and large greatly muffled. I might hear someone in the same room as me if they talk loudly enough, but I am not hearing anything going on outside of my den.

Headphones like to make the claim that they make a virtual 7.1 immersive audio experience, but most usually fall well short of the mark in application. Obviously, at the best of times, it is an imitated experience that still falls short of a quality surround sound stereo set-up, but the Prism’s do a fair job of mimicking the effect. In particular the Dolby Pro Logic sound was only adequate at delivering directional sounds during FPS titles where directional sound can be very important. There is software that comes with the headphones that allows you to do some cosmetic tweaking (such as changing the colours on the outer cups), but more importantly gives you some nice customisation options for how the sound is being presented. The out of the box sound was good, but not great, but with some tweaking in the software I had the audio playing crisply with plenty of bass to boot. 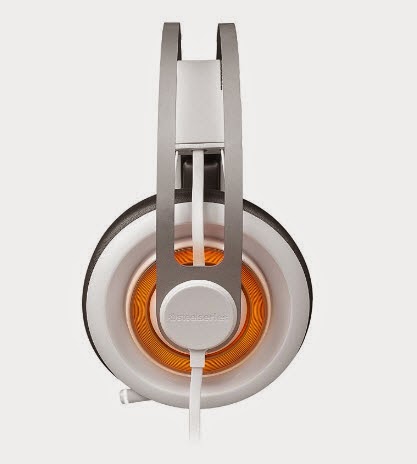 Aside from the colour and size of the earcups, I was impressed by a handful of other design choices. For one, the retractable boom microphone sounds great. I had no complaints from other players that it was too muffled or too sensitive. It also slides in and out very easily. If there is a concern, it is that it slides in and out just a little too easily after enough sessions. The microphone is not quite seated all of the way into its cylinder recess any longer. When I have it tucked all of the way in, it does slide in and out loosely about a third of an inch. Not a significant amount, but enough to irritate.

There are no in-line controls, but there are dials on the outer earcups just outside of the illuminated circles. These textured dials allow you to turn the LEDs to customise your sound settings without hassle. One side controls the headphone volume and the other controls the microphone. The cable is different than any other headset I have tried out as well. Usually they are braided or simply standard insulation covering, but the Elite Prism provides a flat, tangle-free cable that looks as though it should be quite durable. The only complaints I have about the headset are minor. The cable has a rubbery texture so the cable has a tendency to ‘grip’ the arm of my char (or my arm at times) as it slides about, and because it is not a replaceable cable, I do have to make sure it is not getting pinched or run over by a chair at some point. These might be common sense concerns, but not having seen a cable quite like this, I do hope it is as durable as it seems.

While on the topic of innovative design, there is a nice audio out option on the opposite earcup. This is just a standard 3.5mm opening that another person can hook their own headphones up to so they too can listen to the game in action. Or if you have a basic soundcard that is incapable of running multiple audio devices at once, you could theoretically run the cable out to your speakers.

Last but not least, I am a huge fan of the headband. The padded underside is durable, but the design of the headband itself is unique in that you do not manually adjust the position of the headband. Instead it simply stretches to accommodate the head using it. This is particularly nice in my house where my son, oldest daughter and I all use these at my PC. It sure appears durable, and is incredibly quick and convenient.

Good sound, innovative design and considerable comfort make the SteelSeries Siberia Elite Prism Gaming Headset a great choice, especially if you are prone to marathon gaming sessions. They never feel overly heavy, my ears feel like they are breathing and they do a nice job of sealing the sound in for my listening experience.