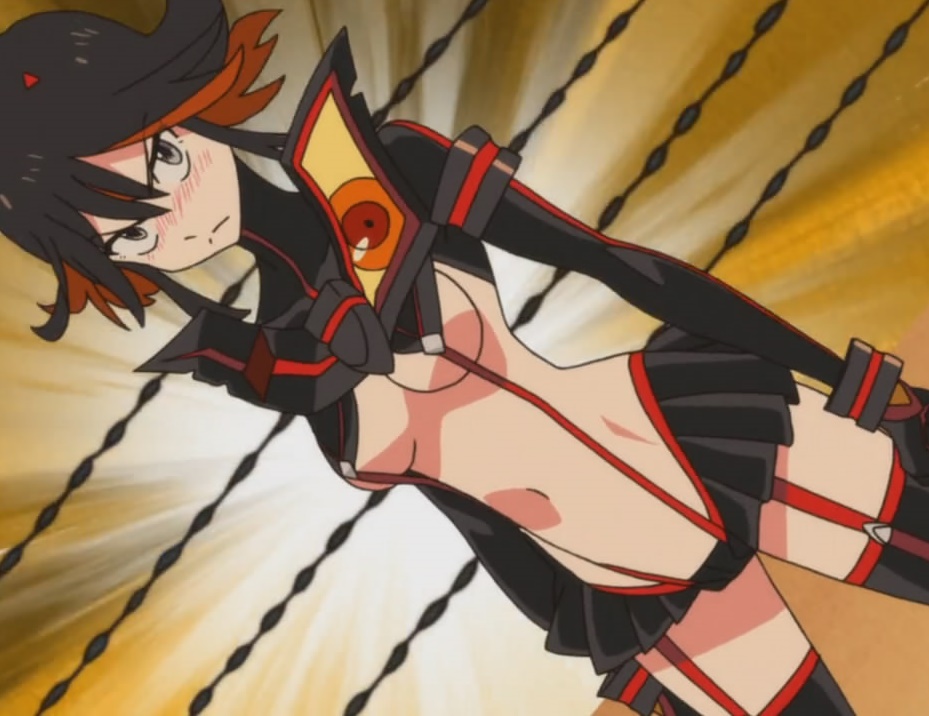 I know I’m late to the party with Kill La Kill, but I was aware of the controversial reputation that the series had before I put the disc into my DVD drive.

It took me around five minutes to understand why. This is a series that doesn’t even pretend to hide its fan service; across the first four episodes that make up Volume 1 it in fact seemed like there was a concentrated effort to find more creative ways to strip even more clothes off the body of school girl Ryuko Matoi as she fights through hordes of her fellow classmates, promising us that she becomes ever more powerful as she sheds each strip of material.

In other ways Kill La Kill is traditional for an action anime in its approach. Matoi’s ultimate goal is to work through the ranks of her fellow students so that she can take on the criminal mastermind, Student Council President Satsuki Kiryuin. These rankings are rigid; students wear a uniform with one to three stars, with the more stars equalling greater power. We’ve seen this exact system in a host of anime series in the past, and while it does work as a narrative device because it allows the creators to slowly escalate the dramatic tension to that final conflict, it’s one that I’ve watched far too often now, even given my relative newness to anime. 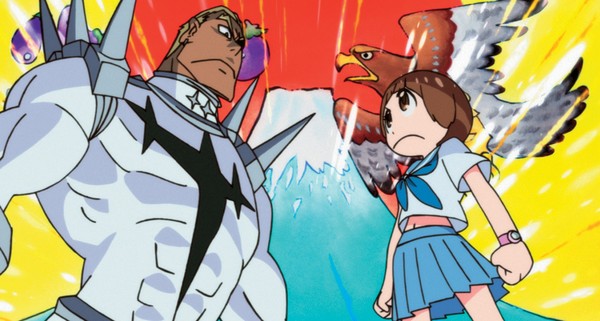 Because of all that I’ve outlined above it would be so easy to dismiss Kill La Kill as yet another generic anime, resting too heavily on sex appeal and safe anime tropes to see it though.

Once you start digging around the show, it reveals itself to be really quite intelligent. At the start of the first episode we see a class being taught about Hitler and fascist Germany. Standard class life, right? Except that the school itself is being ruled like a fascist dictatorship through the use of fashion (the special suits that students get to wear to rule over the non-suit wearing students), and that the Japanese pronounce “fashion” and “fascism” very similarly to one another. Clever pun! It also sets up one of Kill La Kill’s core narrative themes – the conflict between the working class and the privileged and the affects of social inequality. Matoi is the symbolism of that fight and the representative of the underdog, and this theme is further supported by her choice of a weapon. It’s not a gun. It’s not some kind of legendary weapon. It’s a scissor blade. Yes, of course it has powers because this is a anime and everything has powers, but the symbolism is there.

It’s also a uniquely beautiful anime, with a vibrant, energetic use of colour and movement. I’ve not seen an anime quite like this one, and even though it’s clearly an art style that is best suited to combat and fast movement, the characters in Kill La Kill have an attractive, original style to them that helps to build their personalities. It’s also worth noting that Kill La Kill can become quite over the top and surrealist, both in terms of theme and art style, and you should go in expecting that kind of energy. 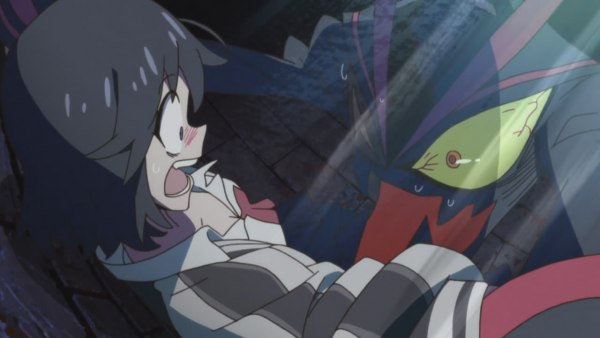 The fan service is extensive, though. There’s all the usuals that you’d expect – pervy dad, pants being pulled down (or skirts being blown up) at inopportune (or opportune, depending on your point of view) moments. But the cherry on the cake is Senketsu, the sentient sailor uniform that drinks Matoi’s blood in order to give her extreme power. It’s a double whammy of sexualisation – not only is the costume daring to the point where no one would want to wear it in public, but the light vampirism that goes on to “turn” it on hearkens back to a series of tales that were always about sex (at least until that Twilight series ruined Bram Stoker’s legacy). It works on a symbolic level as it’s a clear statement that Matoi is fighting against the oppressive regime, but I can see why some would find it excessive.

The pacing of the anime is also great. Across the first four episodes of Kill La Kill a lot happens, but never so much that it the plot becomes overwhelming. There’s also enough by way of character exploration to get to know the major players without ever getting bogged down – a character drama this one is not.

Kill La Kill is the right kind of controversial – it’s edgy enough that it’s going to offend people, but it does so to make a point of it. Coupled with one of the more stylish art styles that we’ve seen in popular anime recently, it’s one well worth watching.