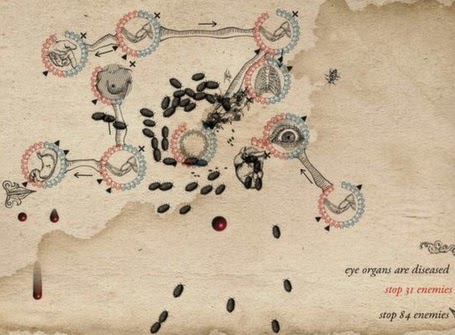 Prophour23 may bill itself as a casual Real Time Strategy, but after playing it for a while I can honestly recommend it as one of the best mystery games I’ve played in a while. This is a game where discovery is the key to victory and you only learn through experimentation, so it’s all the more fitting that the game’s instructions are obtuse. This approach to game design feels modern, but it’s surely not for everyone, as the mixed reaction to similar games like Starseed Pilgrim would attest.

Developed by The Secret Pie, the studio name for veritable one-man-army Przemek Müller, Prophour23 is an eccentric game about creating body parts and allocating them purposes to defend your heart from attacking insects. It plays like a tower defence in an alternate reality in which tower defences never existed: there’s no smooth feedback loop between building structures, defeating enemies and earning money. Instead, players need to navigate a confusing tech tree of body parts which upgrade into others, each with their own specific functions and none of them optimal to playing the game at hand. It’s tough to find a balance between generating revenue with stomachs and lungs while fending off bugs by screaming and spontaneously growing thorns (that’s quite possibly the strangest sentence we’ve ever published at DDNet – ed). In a nutshell, this is a game about organising organs. 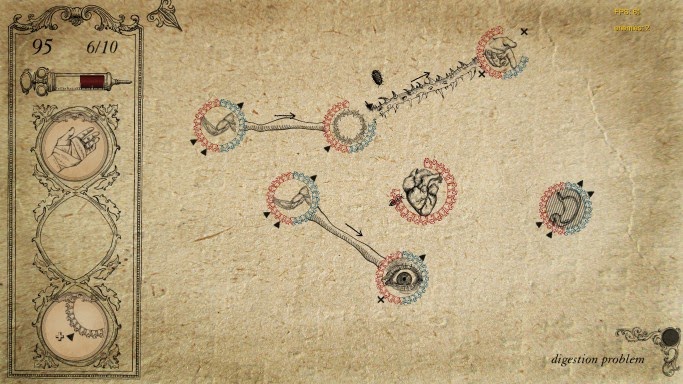 Now that we’ve talked about the strategy half, let’s talk about the mystery. There’s no predefined plot in Prophour23, or even a story mode. Instead, the mystery is figuring out the rules of the game to begin with. There is a handy tutorial which explains the very basics, but it does so in a disembodied voice which suggests that it’s not telling you everything. Surely enough, since body parts need to be connected to others to function, the variety of possible combinations do hide extra mechanics for curious players. Furthermore, there are powerups you find mid-game, and they’re all up to you to figure out. And just when you think you’ve constructed a functioning organism, night falls and an army of bugs will devour your hard work before you manage to summon eyes. Learning is an uphill battle and it’s easy to get frustrated at the game’s lack of tutorial, but it all fits perfectly with the theme to deliver a unique experience.

It’s a shame however that the controls can be at times confusing. Body parts are connected by clicking on one and then clicking on another, and they are upgraded by double-clicking the organ and selecting your upgrade path. Unfortunately, the former and latter functions often get confused for each other, although this issue is easily fixed by a alternate control scheme nestled in the options. You can also connect parts by drawing lines through them, which seems like it would work better if this were a tablet game.

The enemies perfectly compliment the mystery of the game’s mechanics as they are explained with even less clarity. Each round of Prophour23 is randomised and there are some bugs that will appear in some runs and remain absent in others. The initial beetle is simple enough – it’s slow moving and aims straight for your heart. After the first day-night cycle however, and just as you start to feel confident about the mechanics you’ve so far picked up, the game introduces enemies which dynamically alter the space in which you play. Sometimes you’ll lose the ability to use certain parts of the map, sometimes organs will fail. Havoc will eventually take over, and your only defence is your understanding of the game itself. The 5-10 minute rounds make me want to say the game is short, but honestly after many playthroughs I still can’t confidently say I’ve seen all the content there is to see. The longer you survive for, the higher the variance there is in enemies and even if you beat the game the random nature of it means that you might not be able to on your next few attempts. 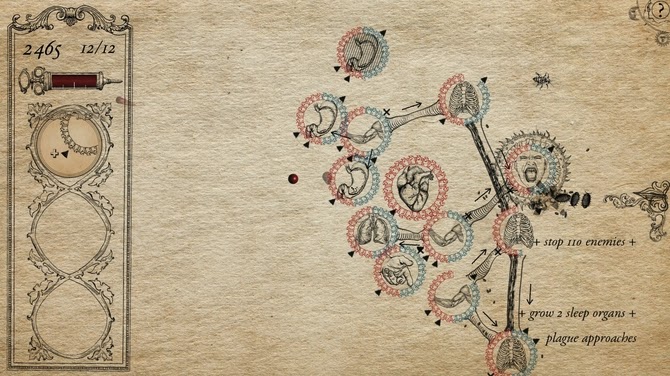 All the breathing room allows for a survival mode which is deeply replayable, requiring a different strategy each time depending on which bugs decide to spawn. While modern game design prefers a staggered approach to level design, teaching one mechanic at a time, Prophour23 throws challenges at random. This results in an experience in which you’re always learning and experimenting, and it perfectly nails the overall theme of the game.

Speaking of theming, The Secret Pie clearly know what it’s doing. The graphics are reminiscent of historical anatomic sketches, which are reflected in the relative freedom of the player’s biological engineering. Similarly, the jaunty music rouses excitement as you anticipate your next big scientific breakthrough. It’s a simple style, but it’s used very effectively to convey exactly what the developer wants.

And that’s why I think Prophour23 is going to be divisive. The Secret Pie has crafted an esoteric, rather obtuse game that requires the player to meet it halfway: the game provides the mechanics and a space for play, and the player needs to fill that space with their own imagination and desire to experiment. It’s in effect the same thing as what any other RTS would ask you to do, but Prophour23 is so overtly a mystery that I’m sure people are going to lament the lack of a clear tutorial. People are going to lament the lone survival mode which pits you against everything the game has at once. Prophour23 is clearly not a game built for the mass market – it’s for the gaming equivalent of mad scientists, treasure seekers and cult-genre lovers.