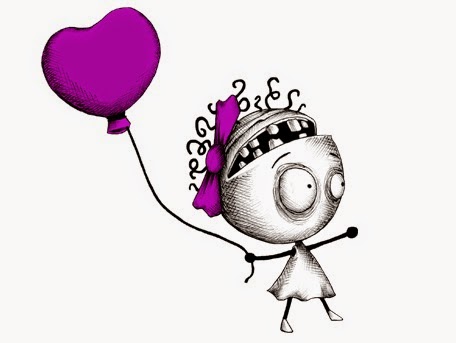 Murasaki Baby is disturbed. Not just for its art style, which was clearly inspired by a mix of The Brothers Grimm and Tim Burton. That aesthetic has its role, and performs an admirable job of making it clear to players from the outset that this is a dark little tale told by people like Burton who harbour a deep and abiding frustration for some kind of injustice in the world. But the aesthetic is not what makes Murasaki Baby a disturbing experience; that would be the fact it takes a sadistic pleasure in making players be utterly cruel to an ugly, deformed monstrosity of a girl who also happens to be a complete innocent.

Players control this girl by grabbing her arm and pulling on her. It’s an action that we see daily as parents essentially do this with their children to guide them through dangerous areas such as road crossings, and it’s clear that the developers chose this control method in order to tug on the player’s own maternal or paternal instincts. But in Murasaki Baby players aren’t gently holding a child’s arm to protect her from rolling death traps. They’re pulling on it like it’s a tug-of-war rope, literally dragging the girl through the world at a pace she can barely keep up with. Pull too hard and she’ll trip and fall, pitifully whimpering as she stands and brushes herself off. 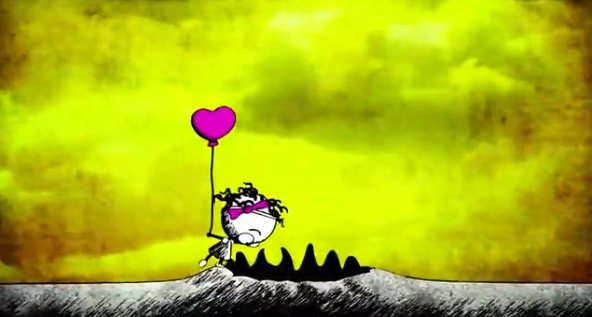 She’ll also whimper whenever she encounters danger ahead of her, which happens on a regular basis. The girl’s life is represented in the game by the most innocent of images – a heart shaped balloon, and over and over again that balloon will be burst by something nasty. Enemies shaped like pins will fly in from all directions. The local bully boy will chase the girl down and catch her. The baby of Murasaki Baby is as fragile as you’d expect a little girl to be, and the abject brutality of what she’s exposed to – no, what you are personally responsible for her experiencing – makes each death rattle something that is akin to a punch to the soul.
Though the game contains no dialogue, and the plot itself is as simple as the baby looking for her absent mother, Murasaki Baby is also leaden with some really quite disturbing themes. From start to finish there is the strong implication that the whole game is a metaphor for child abuse. I base this reading on some of the visual imagery and the fact that, well, the baby can’t seem to find her mother in a clearly hostile world. The clashing, cold monochrome colours of the environments and the sharp edges and surrealistic enemies also imply over and over again the idea of growing up in a broken or destitute home – one particular level has people in city buildings throwing teeth at the child, which can be interpreted as representative of the lack of dental hygiene that this girl no doubt suffers from, judging from the condition of her teeth in her misshapen head. 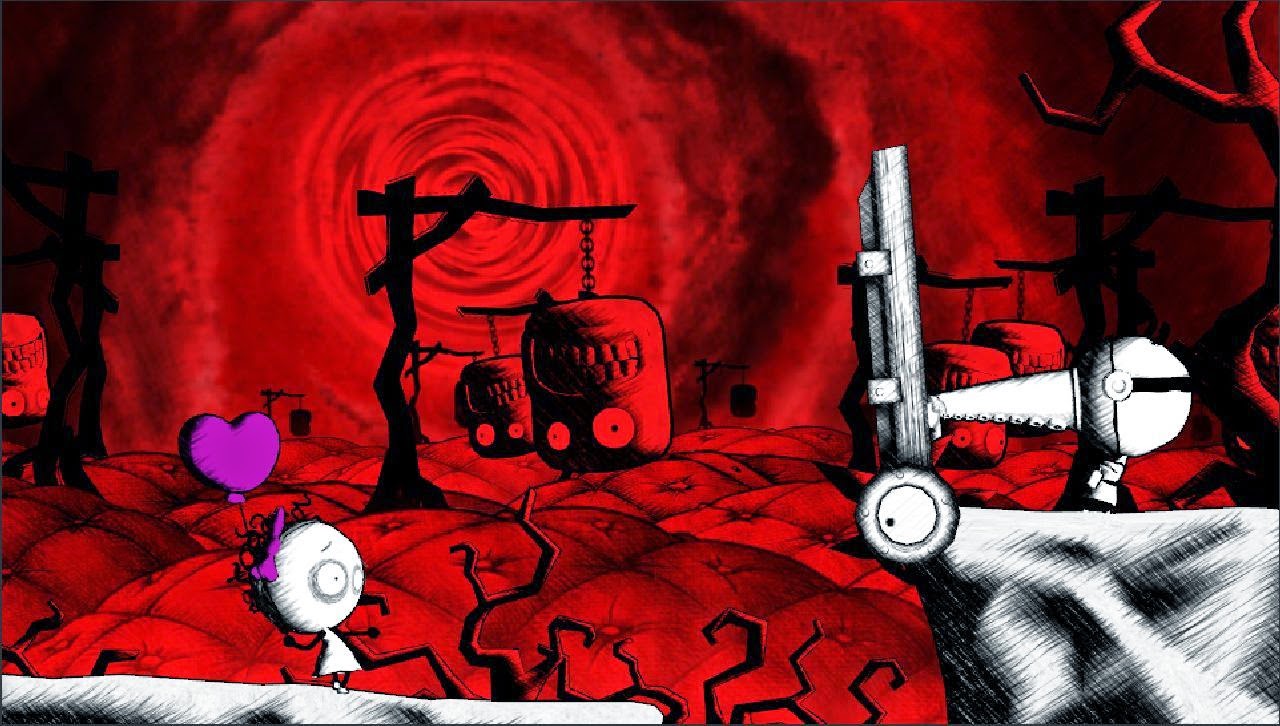 More than anything else, the game reminds us over and over again that the “civilized” world rejects anything it perceives as ugly. Murasaki Baby’s little girl is very much the monster of other games, despite being so single-minded in her devotion to her mother that she’s willing to go through hell to try and find her. In every way, this baby is the innocent, but based purely on her appearance, the entire world is out to get her. I’ve seen people claim the ending is “sweet,” but in the context of my reading of the game as above, I couldn’t agree with that assessment any less than I do. Without giving the ending away, it left me with the coldest feeling that despite the obstacles that she’s overcome, the baby is in no better position than when she started her adventure.
Playing Murasaki Baby is an emotionally draining experience, to sum the above up. It’s the kind of game where its short running length (about two hours) isn’t actually an issue, since the experience is so powerful that it’s like being exposed to an artistic masterpiece, and were it any longer it would start to deaden the impact of its themes. Just as authors cut back on unnecessary words to ensure their reader gets the message, and a filmmaker understands that a film that runs for five hours will tire audiences, I’m a fan of the developers of games like Murasaki Baby showing restraint and maturity in resisting the urge to throw padding into the game in order to avoid the “it’s too short” comments on Reddit giving it the commercial kiss of death. I wasn’t able to physically put the game down for the time it took me to complete it, and even though it’s not the most challenging game out there on the traditional set of game skills (co-ordination and reaction times, in other words), it’s a mentally stimulating game that I’ve been mulling over constantly, even as I attended an event like Tokyo Game Show and should have, by rights, been completely distracted by bright colours and a billion new games to play. 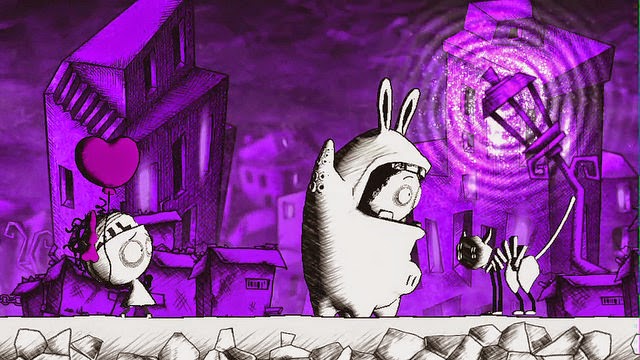 As a game, it would be unfair for me to say that Murasaki Baby is exactly enjoyable. It works like a puzzle platformer, where players use the front touch screen to move the baby around, and the back touch screen to flip between environments, each of which has their own effect. A red environment will cause jack-in-the-boxes to pop out in the background, scaring away everything trying to bring harm to the baby. A blue background, meanwhile, creates rain, which fills up a river and allows the baby to jump on a little raft, and then flipping the background to an orange one allows the player to create gusts of wind which propel the baby across the new body of water. These puzzles are never especially taxing, and so, while the game doesn’t really explain how to play it, once the player’s figured out the basics it’s easy enough to get through.
Despite its simplicity and short run time, there are some horrible technical faults that really shouldn’t be there. The game wouldn’t always register that I was grabbing the baby’s arm, making it impossible to move her, and there were times that my little character would be killed from this inaction. There were other moments (such as the tooth tossing scene), where I needed to use two thumbs on the front touch screen – one to move the baby, and the other her balloon so that it wouldn’t be popped by the teeth, but this would mean that my hands would obscure my view of the screen and the next thing I know a tooth got her anyway. Generous check points and a general lack of difficulty prevented these gameplay flaws from actually affecting the flow of the game, however. 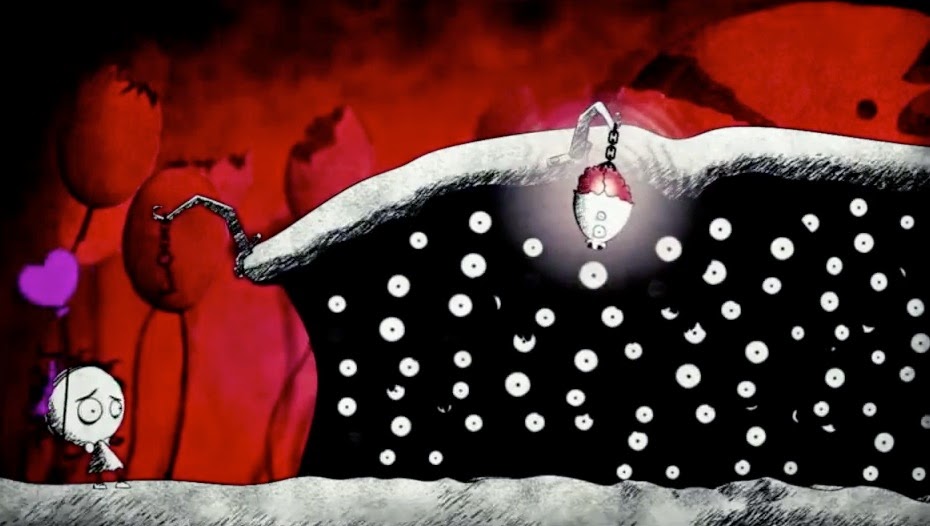 But these flaws don’t hurt Murasaki Baby. Not when its broader picture is so brutally effective. What we have here is a darkly beautiful and emotionally-challenging experience, rather than a game, and completely and utterly essential from a transcendent games as art point of view. Think of that $15 price to buy the game as being the entry admission to an art gallery and you’re approaching this one from the right frame of mind.

TGS 2014: Hands-on with Never Alone, the game about an Inuit boy and his fox