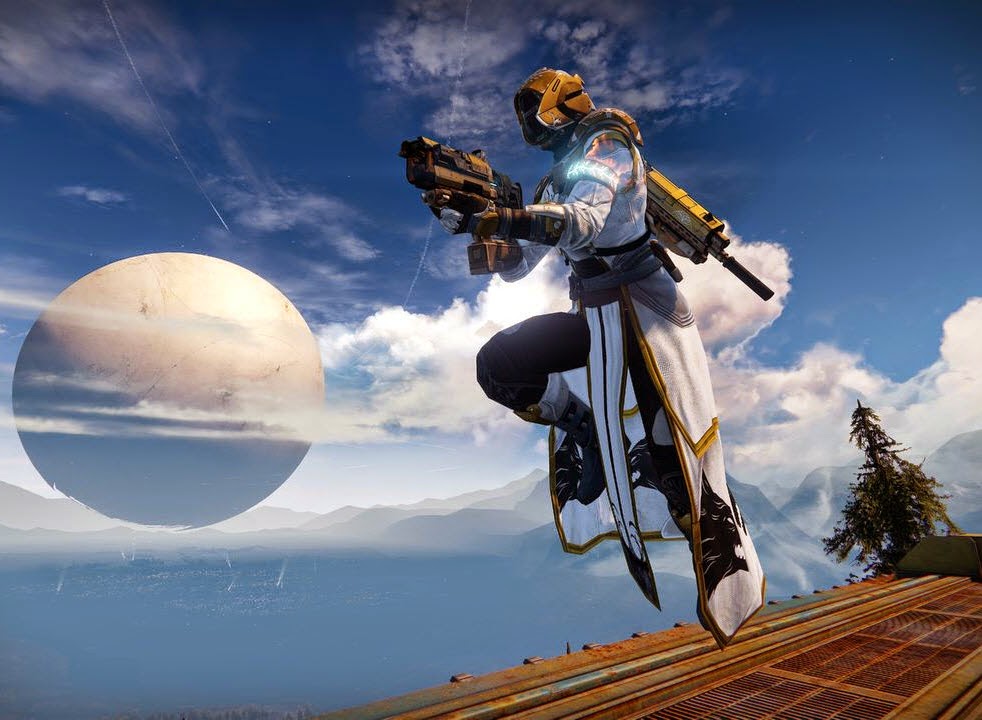 At a glance Destiny seems to check most of the boxes I was looking for from a game, with excellent visuals and tight shooting mechanics to go with some MMO/RPG elements to keep me coming back for more. It is difficult to view Destiny within a vacuum due to the overwhelming hype machine that has surrounded it, but having spent a great deal of time with the game, I do believe that I have a great handle on both its merits and shortcomings. I enjoy Destiny and continue to play it, however, it has in fact left me wanting more from it as well.

The idea of a science fiction epic brought together by online gameplay and a variety of RPG-based progression hooks appealed to me from day one. By and large Destiny delivered on most of these promises, but not all. The story had the potential to be interesting, but generally fell flat instead. Whether you want to pinpoint the reason for that as the writing, the voice acting, the way it unfolds is besides the point. Your character is a found by a mechanical object called a Ghost, who resurrects him/ her to become a Guardian of the last city on Earth. This right here has the potential to tell a haunting story as your travel through futuristic ruins through the eyes of your character, learning more about what happened to the world through discovery and exploration. Unfortunately this story never resonated with me the way that other post-apocalyptic shooters, such as Metro’s does.

It’s interesting to compare both Metro and Destiny, because both games are futuristic gun games, but tell very different tales to one another. There is a sterility to Destiny’s futuristic world that lacks the atmosphere of Metro’s grittier narrative. The tale of survival is also woven much more deeply into everything that happens within Metro. In Destiny we’re meant to believe that humanity is desperately struggling for survival, but most of these potentially inspiring or haunting moments are simply disjointed and separated from what you’re actually doing while playing. 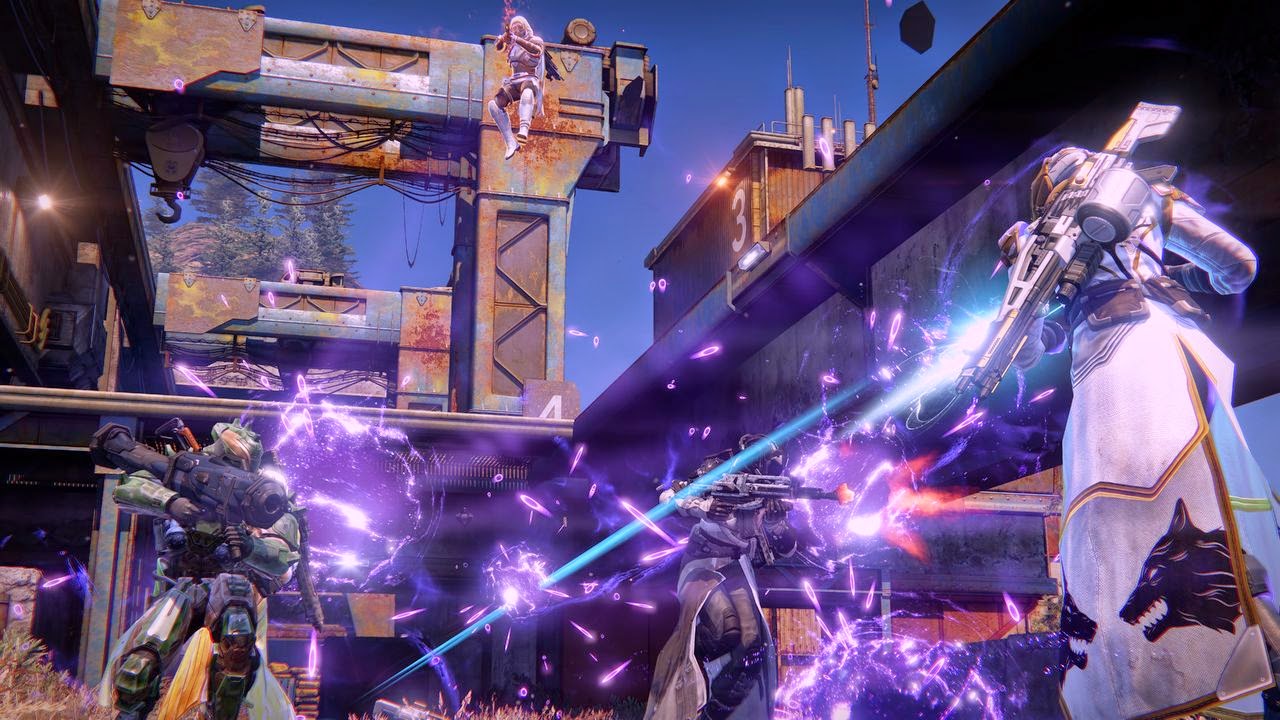 Much was made of the voice acting in Destiny, with a great deal of the focus on Peter Dinklage’s performance during the public beta. I actually did not mind the effort, but for an actor we have seen deliver so many great, enthusiastic performances in other roles, Dinklages’s delivery is both stilted and sterile. That is likely the result of the brief he was working to – he is after all voicing a machine after all. But regardless, his talents could have been used in a more interesting role.

Thankfully Destiny does deliver in a handful of other areas and they were just as important to me. Bungie knows its way around shooting mechanics, and there are plenty of options to help customise the controls while delivering a tight, fast-paced shooting experience. The first time a horde of thralls came rushing at me in a wave as they weaved in and out of the shadows, my heart was racing as I tried to fend them off with a combination of melee strikes, rapid fire shooting and some tactical retreating to reload.

(For a second opinion on the game, check out Matt’s review of the PlayStation 4 version)

Moments like this are tense, visceral and thoroughly exciting. The controls are perfectly polished with an exciting blend of powers and weapons to help deal with the ever escalating challenges. This is all held together with crisp, detailed visuals that runs at a smooth framerate (though some occasional texture pop-in does occur here and there on the Xbox One) and makes the battles a great deal of fun. Some of the open vistas with views of the horizon are absolutely stunning, though trips down crowded corridors and collapsed buildings lack the same awe factor.

Some of the RPG elements like levelling, new skills and gathering loot help to make Destiny a more rewarding experience for people like me who do not mind a bit of grinding and exploration. Going to an environment away from the story missions and tracking down message beacons that serve as quest givers was good, MMO-style fun. I spent nearly three straight hours on my first planetary patrol trying to complete bounties that provide rewards for completing challenges like killing 100 enemies or gaining 9,000 experience without dying. And then, of course, there are the big monster battles. During these moments away from the story Destiny feels at its best. There’s a series of worlds to explore, people can drop in and out of your same session, and when big events come up there is a genuine sense of satisfaction to working with a couple of other players and completing them. 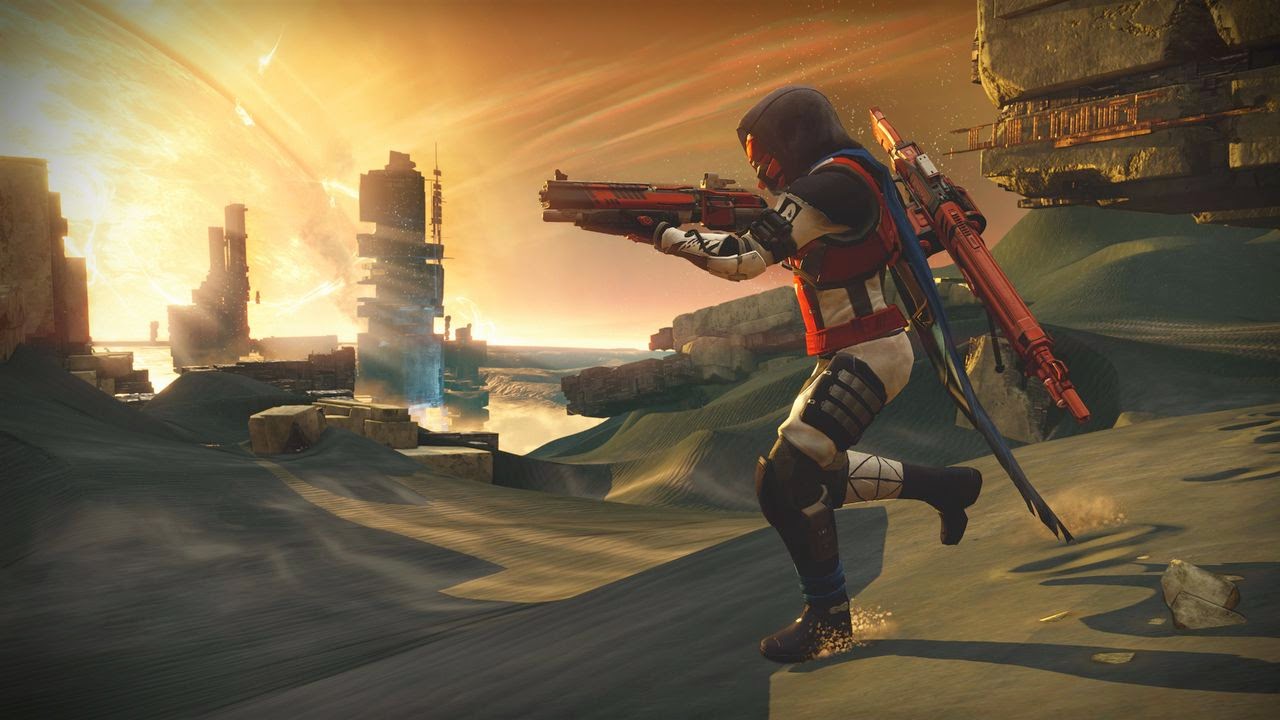 However, the MMO elements feel very light. There is no way to communicate outside of a headset and a couple of canned motions such as sitting or dancing. Given the frantic nature of the FPS genre, this does make more sense than having a chat box in a more timing-based/strategy-based MMO like World of Warcraft, but it would be nice to expand communication options during peaceful moments as well. One interesting design choice is that there appears to be no real penalty for character death. That makes sense given the somewhat wide-open nature of the game since there are fewer set opportunities for checkpoints like in a Battlefield or Halo title. Near the end of story missions, you do wind up entering a zone where a character death will send him/ her back to the beginning of that area, which does set you back some, but even then you keep your earned experience and items. I feel like this does drain a little of the tension out of the experience but also makes Destiny more accessible to gamers less acquainted with the FPS genre.

That is not to say that Destiny is really easy. You can brute force your way through most of the situations that Destiny puts you in due to the respawn mechanic, but tactics are still needed for those end fights with bosses and for strikes and raids later in the game. As with any good shooter, there is also a competitive player vs player mode. The modes themselves are fine, but the matchmaking is off. Bungie has claimed that regardless of level, character damage and life has been normalised or made the same, regardless of level. That being said, higher level characters will have weapons with more perks (like faster reload times) and skills. Given the vast number of people playing Destiny, more care could have gone into keeping players of similar level playing against one another.

Destiny is also continuing an trend that I seem to be encountering quite a lot lately in AAA-games, and that is games that are promising us more reason to play down the road. There is enough to do in Destiny that I do not feel like it is an incomplete game, but one can hit level 20 fairly quickly. I recently had a chance to play NHL 15 and The Sims 4, and both games did the same thing. I’m not entirely sold on pulling out features from long running franchises to then put it back in later. Destiny is at least a fresh IP, and feels complete, but Bungie will want to make good on its promise for much more content down the track if the game is indeed to become the complete picture.

There are certainly things I wish that Destiny had done better. There are some missed opportunities here, but if it is true that more content is going to be perpetually pushed out for the title, then perhaps those missteps will be addressed. However, there is still a great deal that Destiny does right and while it may not have revolutionised the FPS genre the way people had hoped, it is a lot of fun all the same.

On Samurai Warriors and historical authenticity; why it deserves more credit for accuracy than it gets