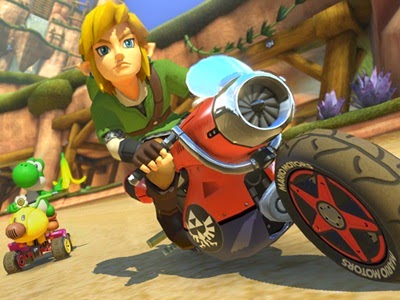 While Mario Kart 8 already received downloadable content around its launch in Japan, Nintendo’s official UK store revealed today that the popular kart racing title would be receiving a slew of new content beyond the fabled Mercedes-Benz cars. Much of it is scheduled to be released within the next year.

Most intriguing, however, is the addition of non-Mario properties to the Mario Kart series; Link (The Legend of Zelda), Isabella (Animal Crossing), and Captain Falcon’s Blue Falcon (F-Zero) will all be represented in Mario Kart 8 via paid downloadable content.

Besides special cases such as R.O.B. in Mario Kart DS and Pac-Man in the Mario Kart Arcade GP titles, this is the first notable example of the plumber’s cast expanding beyond the usual Mushroom Kingdom suspects. Nintendo representatives have actually spoken in the past about adding non-Mario characters to the roster, though, so the foreign additions won’t be a complete shock to fans in the know.

That bit of history aside, Nintendo revealed partial information about two DLC packs as well as the some screenshots of Link and others in action. Whether this will be the full extent of the new content remains to be seen, but there’s quite a bit to take in below. 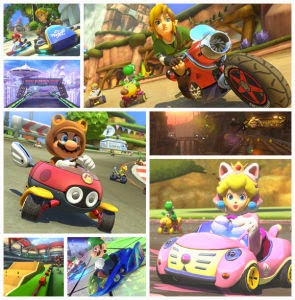 The full content of the above packs is still shrouded in mystery, but Wario’s Goldmine from Mario Kart Wii is confirmed to be returning. Courses based on The Legend of Zelda and Animal Crossing are confirmed, too, and those with keen eyes will spot references to F-Zero’s Mute City and the Excite Bike series in the screenshots.

While the Mercedez Benz DLC was free, the first new content pack will run you £7.00. Pack 1 is already listed for pre-order. Should you opt to nab one or both packs, eight Yoshi and eight Shy Guy colour variants will be available upon purchase. Do note, however, that the above release dates obviously reflect Nintendo’s UK branch; no announcements regarding pricing or availability have been made for other regions.

With content planned for long after the game’s release, Nintendo’s emphasis on evergreen titles is clear. One imagines strong initial figures for Mario Kart 8 and the runaway success of recent entries (Mario Kart Wii shifted over 30 million units worldwide) did not hurt the decision to provide extras into the future either.

Are you excited to see familiar faces such as Link joining the racing fray?