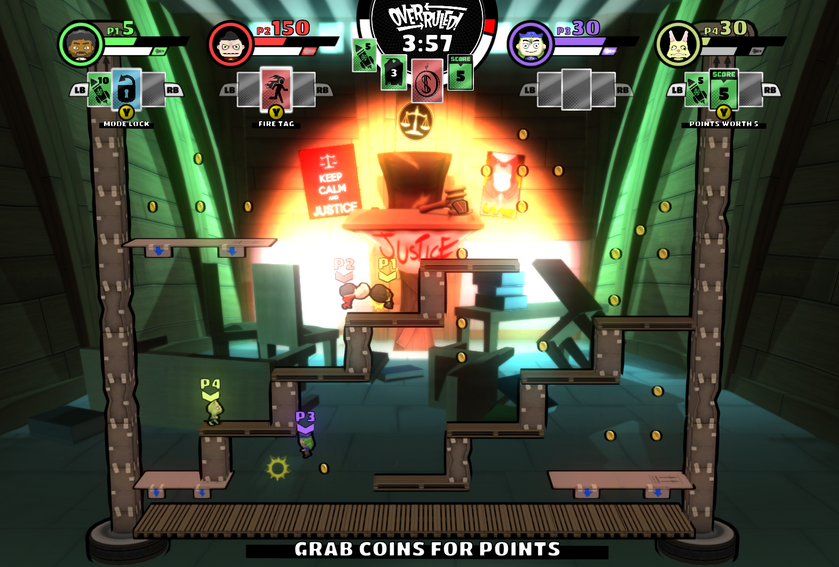 Over the years the brawler has become a mainstay for multiplayer hijinks. However, rarely does a game come by that challenges the genre’s conventions. Overruled! is an early access game developed by Dlala Studios which offers a twist to the traditional brawler mechanics.

Overruled! might seem like a typical brawler at first, but then the game’s clever mechanic of evolving objectives comes into play. One minute players will find themselves in a team death match, the next in a race to various checkpoints or a tussle to grab collectables such as coins and money bags. It isn’t just the game itself which switches up the goals either; players themselves can obtain cards which are scattered across a map to speed up the process.

The game offers diverse play options, too. While the main draw is online play, if you don’t have any online buddies to play with or struggle to find someone online in the match making the game allows local play. While you could set up a bunch of computers and “lan it up” like the 90s, if you have multiple input devices connected to one PC it works just as well. So you can easily set this game up in a living room via HDMI console-play style and have a blast playing it. There is even a campaign mode for single player action. Each character in the campaign mode is given their own set of levels, as you progress through the campaign mode more become available. As this game is still in early development the mode isn’t as extensive as I’m hoping the final release will be, but it is still a great inclusion for players to sit down to for some practice between online matches.

I found myself enjoying the presentation of the game a lot. Even with some tweaking in development still to come, both the art and music are polished and with a clear direction for the future. The character line up is the highlight is filled to the brim with diverse interesting characters. My favourite so far is of course the Fruit Punch man. FRUIT PUNCH. I didn’t find much difference in how the characters controlled outside of visual design at this stage. Something also felt wrong in how the characters jumped; everything felt a little soft, especially when doing a double jump. I also often found myself wanting a few more cards or challenges to appear while playing to make the game feel more varied, as I was experiencing repeated battle conditions over and over again.

Overall this game is doing some great things, and where it’s missing the mark extra development time should be able to fix things up. It is a unique concept for a brawler and at times even reminded me of the Smash Bros. series by Nintendo. This game is something to watch as it goes further through development and becomes more feature rich.