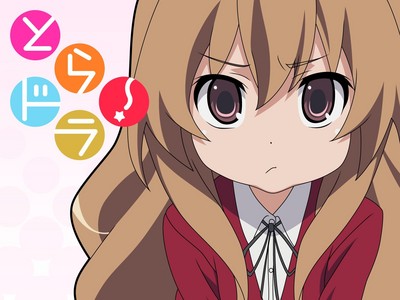 Toradora is a romantic comedy with an endgame that is seldom in question after the first fistful of episodes. Against this handicap, the writers managed to tell an intelligent, multifaceted tale that enriches the premise to the point where the outcome will be the last thing on viewers’ minds.
The title “Toradora” is a clever portmanteau of the Japanese word for tiger, tora, and an abbreviation of English load word, dragon. It simultaneously compares the leading duo’s equivalency to that of tigers and dragons in Buddhism and their tendency to be perceived as daunting by classmates. The proverbial tiger in question is the feisty and explosively tsundere Taiga Aisaka. Dragon Ryuuji Takasu, meanwhile, tends to be rather subdued and wise in keeping with various Eastern views of dragons.
The two outcasts inadvertently become allies of sorts for the sole purpose of pursuing unrequited love. Conveniently enough, Aisaka is best friends with Takasu’s crush and vice versa. The series focuses on all the misadventures inherent in their goals and their rising degree of companionship.
The characters are archetypal and the plot is riddled with various clichés, but boy did the writers ever pick the right ones. Every character is an attention-grabber out of the gate, if not genuinely likable. My attachment to the cast was bolstered each episode as their personalities flourished and careful exposition outlined their motivations without dawning on the trivial details. Any time you believe one of the main characters is too archetypal, some subplot or revelation throws you for a loop. Case in point, a gal who initially seems beyond redemption for flaunting her body and masquerading as an airhead had me rooting for her by the second act. 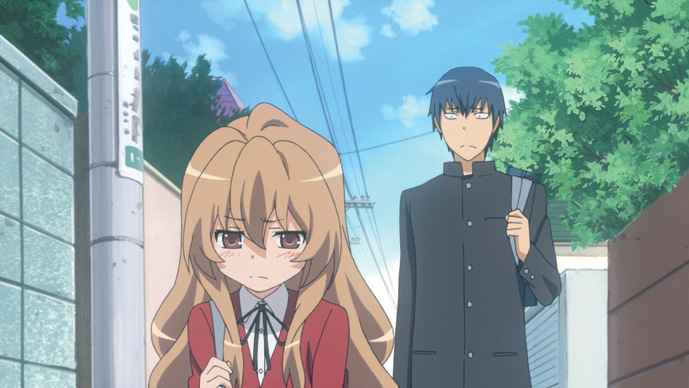 The raw chemistry between Aisaka and Takasu’s eventual gang is equally charming. Each member of the series’ love pentagon has tangible relationships with all the others so that as the plot advances, relationships accommodate accordingly. When conversations involving three or more characters occur, the hilarity and depth creep to the forefront with gags that take their current personalities and relationships into account. Comedic dialogue heavily relies on the current state of affairs rather than the standard comedy, too. Similar shows merely intersperse all the typical gags when deemed appropriate, but Toradora is often so natural in its approach that the clichés stand out as amusing when they drop.
As superb as the comedy is, Toradora’s romantic elements shine equally bright. All the anxiety associated with talking to one’s crush is accounted for; Takasu and Aisaka repeatedly trip over their tongues for many consecutive episodes before finally finding their footing with their crushes. This isn’t some harem focused exclusively on the central protagonist either. Every main character has their own love interest, the identity of which is subject to change as characters discover themselves and their true values. All the gossip from the student body does a stellar job of capturing the spirit of high school days whilst keeping viewers on their toes for potential foreshadowing as well.
Yet most impressive of all is why the story develops. The characters here are all steadily working towards their sweethearts in some way. Thus, even when they fumble, you have to sympathise with their plights and social misfires because they’re not passive participants in a blatantly scripted romance. 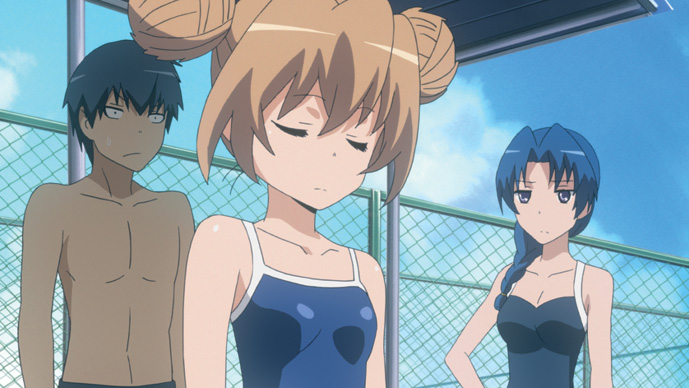 All of the comedic and dramatic components are then ingeniously balanced, making for a consistent tone that other shows never quite realise. The series’ first half relies on the former to get the viewer invested in the characters but doesn’t skimp on worthwhile interactions either. When drama becomes the focus, the gags still rear their head at all the appropriate moments so as to provide relief but avoid interfering with the emotionally sensitive proceedings.

It’s fortuitous that this balance is maintained because Toradora will render many emotionally compromised. I take some perverse pride in having never shed a tear over any form of media, but I’m not ashamed to admit Toradora pushed me to my watery limits more than once. It’s absolutely juvenile at times, to be sure, but that’s a large component of why it works (what with the high school setting and all). It’s executed so expertly that older audiences out of touch with modern school life may even let it slide.
The plot escalates in ways that other romantic comedies don’t manage to pull off, too. What initially appear to be trivial interactions end up being laden with foreshadowing integral to the show’s intense moments. Never does Toradora tread water for the sake of pacing; there’s a clear story to be told and the writers endeavoured to convey it in a manner as captivating as possible. It all comes to a head with a climax that, while indeed predictable, would be noticeably less fulfilling if it fell even one shy of its twenty-five episode running span. 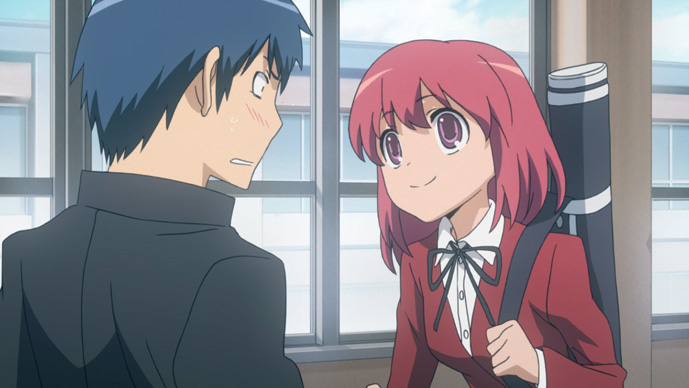 The premium set Toradora comes in is almost as special as the show itself. The box is fairly petite compared to recent NIS America releases but still looks the part thanks to a polished, minimalist design. The disks housed within its cardboard husk contain both modern video formats, Blu-Ray and DVD. Remarkable still is the fact that every disk contains a complete English dub and Japanese audio with English subtitles. I personally opted for Japanese with subtitles for the bulk of my viewing to get my Rie Kugimiya fix, though I surmise fans well versed in English dubbing will appreciate the presence of similarly big names like Johnny Yong Bosch.
NISA didn’t call it quits with just the TV series either; you’re getting everything the anime franchise has to offer (besides a redundant recap OVA), plus the customary bonus of a high-quality art book. I couldn’t undersell this set’s value if I tried; it’s about as good as it gets.
Toradora presents a love story seemingly incapable of resonating with the crowd that dodged school drama like the plague. Its basic premise is executed so candidly and intricately, however, that even battle shounen purists will find themselves rallying behind the show’s endearing cast. Toradora deserves a front row seat with the genre’s absolute best.

Bioshock is coming to mobile