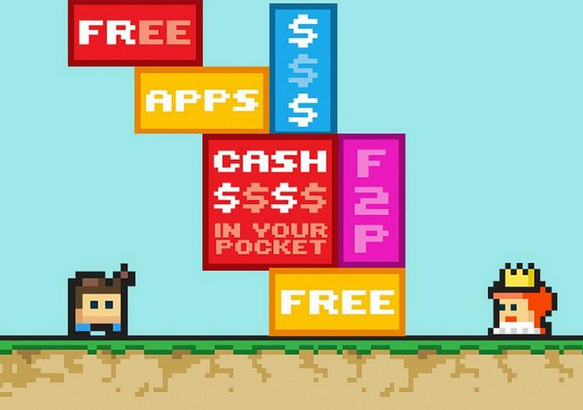 If the title of this satirical little retro platform title comes off a bit confusing, know that it is a shortened version of a much longer title: FREE FREE FREE FREE FREE 2 PLAY! This is a game that intentionally pokes fun at the Free-to-Play business structure that developers and publishers so love right now, while daring to embrace the formula itself. Can this little platformer hop to new heights or does it fall into the ever-growing pay-to-win pits of flawed F2P titles?

The inspirations from the great Super Mario Bros. that dominated the 8-bit era is instantly apparent here. A princess is in dire need of rescuing from the evil ogre named Ug, whom floats around on the top of the screen upon a cloud with a smiling face. The simple graphical design used here emulates the notorious plumber’s world so much so that a quick glance could easily mistake it as a snippet from an early Mario game. It sounds the part too. Elevate Entertainment’s previous title, Lumena: A No-Nonsense Rhythm Game, featured a fantastic electronic soundtrack from Modbon, and the composer delivers yet again with a lively chip tune soundtrack.

This is no average platform title though. Instead of completing consecutive levels, FFFFF2P sticks to a single life, single screen game play method instead. The cloud riding villain casts down an endless wave of annoying advertisements that are typical of F2P titles, and hopping upon said adverts closes them and leaves behind a few coins to collect. In what’s supposed to be a satirical twist on the F2P model, collected coins are then needed to pay the ransom price to rescue the princess. Sadly, the narrative self-refutes itself and falls right into a pit. 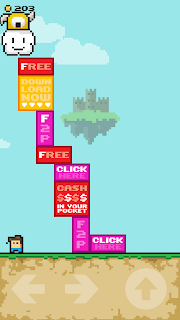 See, the F2P business model is flawed. While there have been a few successes, and while those successes have been mega-hits, even the majority of those games would be better off had they not adopted the tiring gimmicks that have become commonplace in F2P games. Hours of repetitive grinding, overpriced in-game items that can also be purchased with real money, annoying in-game ads, even more annoying full screen ads with tiny close buttons that are all but practically impossible to touch correctly… these gimmicks don’t create fun gameplay. While FFFFF2P tries to be different from the typical F2P formula, it still has the majority of the things that plague the business model in place.

It all makes for a mixed bag, really. The simple platforming action is bite-sized fun and can be, in fact, quite addictive at times. The game pokes a lot of fun at itself with little quips like calling the game’s only stage “Grind Valley 1-1”. This works too, for the most part. Believe it or not, but I have little issue with the overall setup of the game; it’s the confusion within the in-game store that became an issue. See, in-game money comes very slowly in the early parts of the game and the first item in the store is a piece of candy that increases the player’s run speed and jump height for one turn only; it sells for a mere 100 coins. I purchased the candy for the added boost only to find that my next run (which was quite decent) only netted me around 50 coins. Things didn’t add up here – I thought this was supposed to be satire against the F2P business model! But of course, I can also purchase unlimited candies for a $0.99 USD IAP. I almost stopped playing right here… almost. The next item, a bubble that allows the player to take three hits per play, is 2,000 coins or $0.99 USD, was instantly laughable. 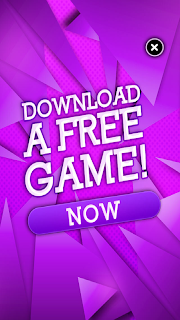 There are other items though and these items increase the value of coins dropped by closed ads: a nickel item drops +5 coins, a dime item drops +10 coins and a treasure box that cost a whopping 25,000 coins grants 5x the overall loot. All of these can be quickly purchased via IAP, but there is no indication if these items are permanent or single use. I’d already spent close to a half-hour grinding for both the candy and the bubble items only to find them to be an absolute waste of my time, so I didn’t bother with these at first. Another bout of frustrated grinding found the nickel item to be permanent and my coin rate acquisition growing significantly larger with each game play session hereafter.

Suddenly, FFFFF2P became fun and quite addictive. Once all of the coin boost items had been purchased, even a bad run would allot me around 2K coins, making the bubble and candy items not only affordable but necessary going forward – the cost to ransom the princess is a whopping 1,000,000 coins! Or, if that’s too much grinding, a quick IAP of $2.99 will suffice too. Worse, there’s an endless stream of “Get A Free Game Now! adverts (see screenshot) – this isn’t satire, it’s just another F2P title.

Elevate Entertainment looked to create a F2P title that is reasonable and fun, and on many fronts it succeeds. This retro platformer delivers bite-sized fun with a great little chip tune soundtrack from Modbon, but it also includes the grinding, IAPs and play stopping ads that are typical for F2P titles today. The thing is, there’s an enjoyable little game here. Strip the gimmicks, and you have a fun little paid title that could be beaten from start to finish in a few short hours. But instead, repetition drags down the lasting fun-factor and the comical satirical narrative of the game ends up self-refuting itself.