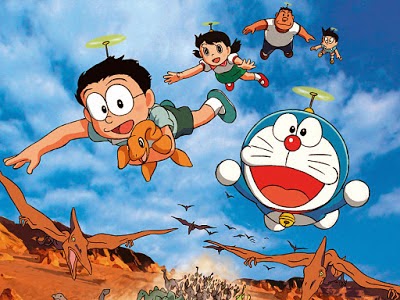 It’s been a long time coming, but it’s nearly upon us; Japanese cultural icon, Doraemon, is finally hitting America with Doraemon Gadget Cat from the Future. The English dub is courtesy of distributor, Viz Media.

A previous incarnation of the show was once slated for an American release back in the eighties through Turner Broadcasting System, but it never saw the light of day. The dub America will be getting is instead based on the 2005 Doraemon anime.

Starting in July, five episodes will be shown per week on Disney XD. At the moment, there are only plans to release 26 episodes.

Of course, the dub won’t be without some alterations to suit the standards of American children’s programming. Aside from several revised character names (such as Gian to Big G), the setting itself has been changed from Japan to a fictional American locale. Cultural symbols and staple foods have been replaced with rough American equivalents; chopsticks become forks and knives and so forth. In the case of sweets, some have been replaced with fruit to promote healthy eating. Other adjustments include different sound effects and heavily localised dialogue.

You can also check out the official website here.