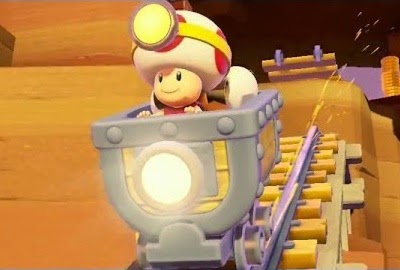 Last year’s Super Mario 3D World was a real hit, shifting over a million units and garnering universal critical acclaim. The imaginative levels weren’t 3D World’s only shining spots though; a bonus mode called The Adventure of Captain Toad had players navigating the lovable Toad through a series of isometic stages that took into account the mushroom fellow’s unique abilities. It was a comparatively puzzle-oriented experience and definitely stood out from the main game thanks to some very unique gameplay.

Believe it or not, our own editor in chief actually asked for The Adventures of Captain Toad to get its own game way back when. As the old passage goes, of course, “ask and you shall receive”.

Today at Nintendo’s Digital Event, the company unveiled Toad’s first game (or “Captain Toad’s” first if you want to be picky) in the form of Captain Toad: Treasure Tracker. The game is a full-fledged version of 3D World’s extra levels but, judging by the trailer, the action has been cranked up to eleven. Our plucky hero will face off against bosses, nab power-ups, and more in his quest for treasure. The backdrops are all looking rather imaginative.

Check out the trailer below:

Once Captain Toad launches this holiday season, most major Mario heroes will have had their own spin-offs. Now how’s about that Bowser game, Nintendo?