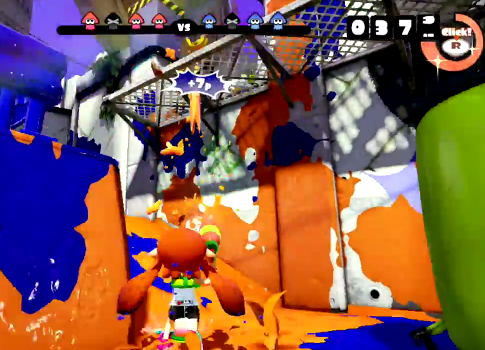 While Nintendo’s E3 digital event was rather brief, it still contained quite a few surprises. Possibly chief among them was the reveal of a brand new Nintendo IP called Splatoon, which had a good chunk of the event devoted to it.

Splatoon is a family-friendly third person shooter that centers on online multiplayer action. Unlike most games in the genre, your goal here isn’t merely to shoot the other players; you’ll want to drench the map in coloured ink to ensure your four member team covers more ground than the opposing team.

In fitting with the unique, inky twist, your character can freely transform between squid and human to traverse environments differently. As a squid, you can stealthily move through any of your team’s ink to scale walls and obstacles effortlessly as well as hide from opponents. You’ll need to be a human to engage in combat and spread ink efficiently, though.

The art style looks a tad Disney influenced, although between the orange and blue ink used in the trailer and that sweet background music, Japanese new wave band Polysics definitely comes to mind too. I will not say no to either of these things.

You can get a better grasp of the game’s mechanics with the announcement trailer below.

No specific release date was given, but we do know to expect Splatoon at some point in 2015.