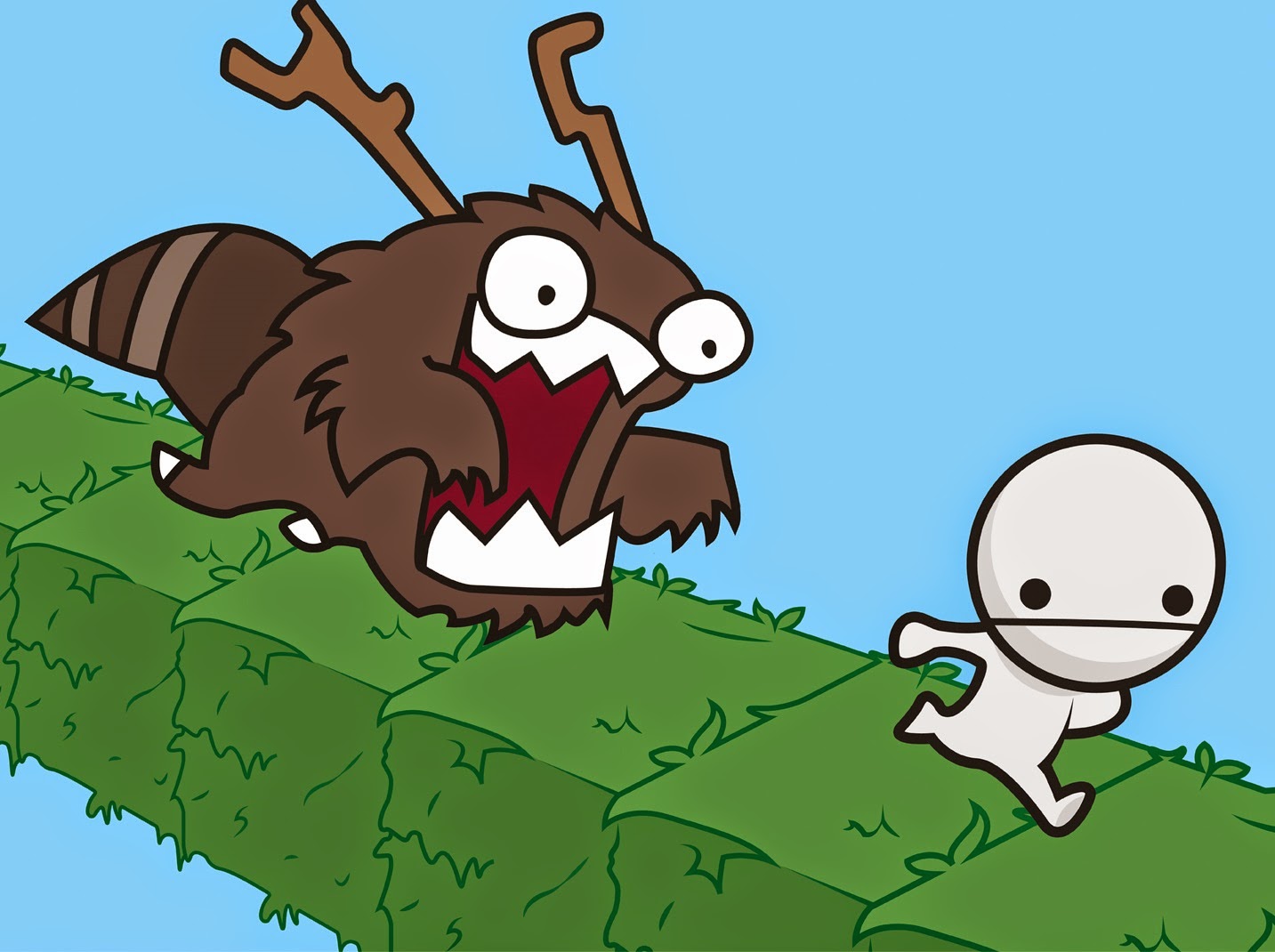 If there’s one thing that kept me coming back to BattleBlock Theater, it’s how consistently over-the-top everything has to be. It took years for developer The Behemoth to put the finishing touches on its latest platforming masterpiece, and it’s easy to see why. While it would have been easy to simply rig up a basic menu and some customisation options to string all the levels together, The Behemoth has carefully crafted an outrageously humorous and addicting experience that will keep us entertained its next project is unleashed on the world.

It’s not only surprising that BattleBlock Theater has a story that is more than an intro cutscene (let’s be honest, most platforming games tend to pass on delivering hearty narratives), but it’s surprising just how funny it manages to be at the same time. It’s juvenile, but it’s funny. The game’s story follows Hatty Hattington (described as ‘King Friend of Friendship Kingdom, best friend to one and all, and the walking definition of handsome gentleman) who is shipwrecked on a mysterious island with hundreds of his close friends. Hatty is then taken captive by the island’s feline natives, and brainwashed to become their leader as his friends are forced to participate in deadly theater performances. 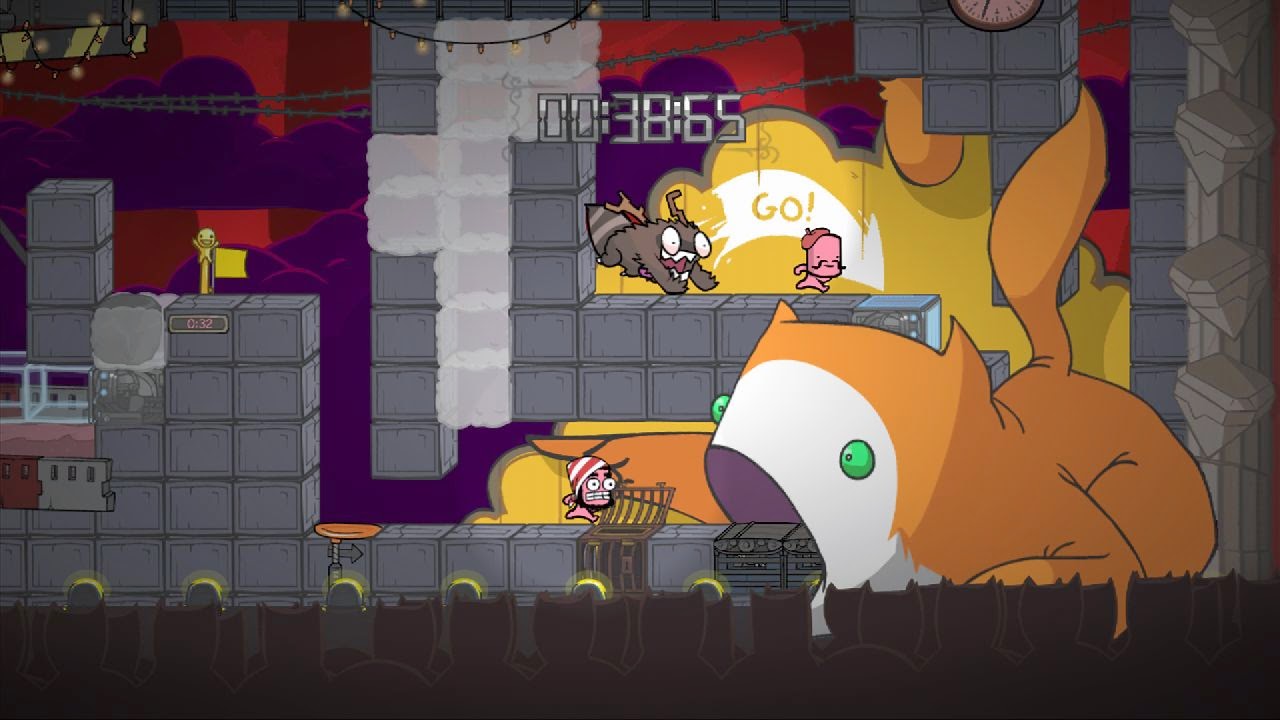 This rather bizarre setup paves way for the hundreds of levels, which make up the majority of the game. The theater motif finds its way into the game’s layout as well; worlds (which are referred to as acts) are composed of nine or so individual levels (stages), and each world ends with a ‘finale’ level. Each level plays out on a theater stage, with catlike silhouettes creeping in the foreground, standing in for a ‘virtual’ audience. It’s all window dressing, sure, but this attention to detail and unwavering dedication to keep the player engaged is what makes BattleBlock Theater stand out from the rest of the platforming pack.

It’s ironic given how creative the setup is that the actual gameplay is simple, but what BattleBlock Theater might lack in novel mechanics and flashy gameplay is made up for with tight controls and excellent level design. Every level is laid out on what is essentially a grid, with various block types making up the floors and walls you maneuver your little avatar on. Some blocks might launch the character into the air or explode after a second or two, while others allow them to climb up or slide down walls. It’s actually quite impressive how much level variety the developers have managed to curate with a fairly limited set of tools, but the game’s nuance and depth becomes more apparent the deeper into the campaign you get.

However, levels aren’t as simple as racing towards a finish line or taking out a certain number of enemies. Each stage contains a handful of gems, and three need to be collected in order to reach the exit. However, the additional (not to mention completely optional) challenge comes in the form of collecting all of the gems in a level, as surplus gems can be traded in order to free captives which translates into additional playable characters. These characters can be used both in the single player, and traded online. There’s also a lone, hidden ball of yarn in each stage, and collecting these becomes currency to purchase new weapons. 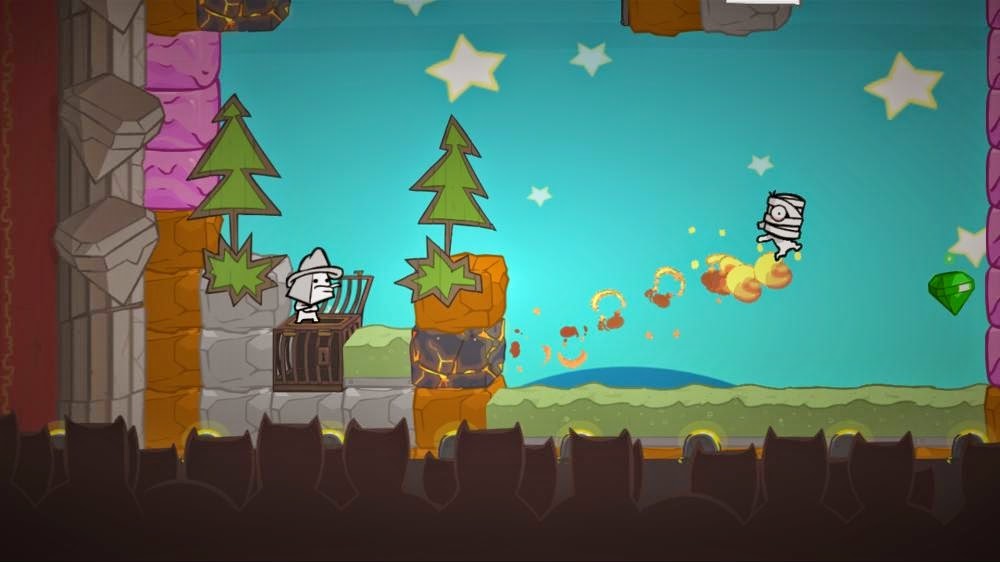 Weapons, along with a standard repertoire of punches and kicks, can be used to defeat enemies, but to be honest, the fighting system never felt as tight as the platforming did. While there are situations where combat is a necessity, I often found myself vaulting over enemies and simply ignoring them, rather than tackling them head on. Still, levels on the whole are not only enjoyable, but well balanced. Some stages will require excellent timing and platforming skills, while others take the form of spatial brainteasers, but BattleBlock Theater rarely, if ever, feels unfair. The difficulty curve is nothing short of perfect (I suspect that’s where the years of development come into play), and even when your character dies within a level, checkpoint placement is reasonable without being overly generous.

BattleBlock Theater wouldn’t feel right if you weren’t able to tackle the game with a friend by your side, and The Behemoth hasn’t forgotten its Castle Crashers roots. Playing the campaign solo works perfectly fine, but BattleBlock was designed with co-op in mind, and it shows. There’s a great sense of urgency and pressure when playing co-op; not only will you have to work together in order to succeed, but collecting every gem and beating par times will require excellent teamwork.

There’s good fun to be had in competition, too. Up to four players can duke it out in a handful of match types, both in free-for-all or in teams. Standard modes like King of the Hill and a basic challenge mode (essentially time attack) are rounded out with more creative ones, such as ‘Horse’, which tasks you with stealing the opposing team’s horses and riding them back to your own goal. Another favourite of mine was ‘Ball Game’, which is BattleBlock’s minimalist take on basketball. The multiplayer mode is complemented by robust matchmaking options, allowing you to play both online and off, with playlist modes mixing different multiplayer modes into one, well, playlist. To cap things off, there’s a robust level editor at your disposal, which provides you with the exact same toolset that The Behemoth used. Since each level and arena was designed with the same set of block types, it’s remarkably easy to break down your favourite layouts and incorporate them into your own custom design. 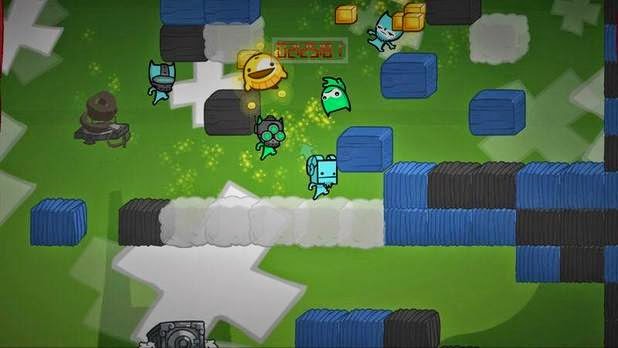 BattleBlock Theater feels like it was designed for the child that still lives inside me. It’s juvenile, colourful, and silly. But more importantly, it achieves everything it set out to do, with a near masterful level of execution. The addictive multiplayer and excellent level creation tools are just the icing on the cake.

Following the Australian budget, opportunities will be thin, but perhaps we can make something of this mess