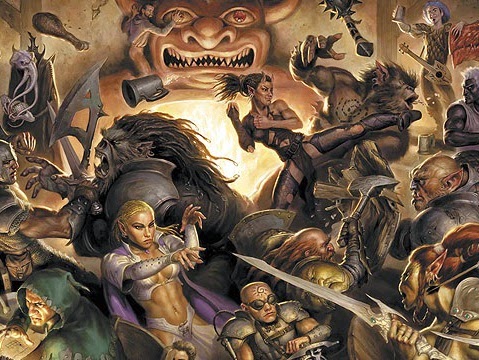 The next 12 months promise to be exciting times for fans of classic pen-and-paper roleplaying games. Dungeons & Dragons sent out a press release yesterday, and with it come some big plans indeed.

First up is the obvious one; there is going to be a new edition of the game released this year. Otherwise known as 5th Edition, the game’s publishers, Wizards of the Coast, will release the Player’s Handbook, Monster Manual and Dungeon Master’s Guide later this year, and that will give you all the tools that you need to play the game with dice and pieces of paper – old school style. The books will start releasing in July.

But that’s not all; Wizards has a cross media plan, to use marketing speak. It’s building a narrative called Tyranny of Dragons, which will take the form of an adventure module for pen-and-paper gamers to get stuck into. Don’t have any friends immediately available for a game? That’s ok, because Tyranny of Dragons will also be a playable module in he Neverwinter MMO, which was released last year. That one will release on August 14 and is being developed by Cryptic Studios and Perfect World Entertainment.

Finally, Wizards of the Coast have also partnered with WizKids to produce a new line of miniatures that will be both collectible, and useful tools for the physical game. There’s more in the works, including comics and apparel, and we’ll find out more about these in the coming weeks.

Having never really had the opportunity to get into 4th Edition, I see 5th Edition as being the perfect opportunity to reignite my love for Dungeons & Dragons. I have thousands of dollars worth of books from earlier editions, but through the 4th Edition life the realities of life caught up to me.

I must admit, the MMO stuff doesn’t interest me, and I do wish that Wizards had a better understanding on how to manage the video gaming side of this franchise (the old SSI DOS games were childhood friends growing up), but this cross media plan is a good one – MMO players might just be tempted to give the real game a go thanks to the shared name giving them a sense of familiarity.

And anything that gets more folks playing Dungeons & Dragons, the better.

Let’s talk about race and games