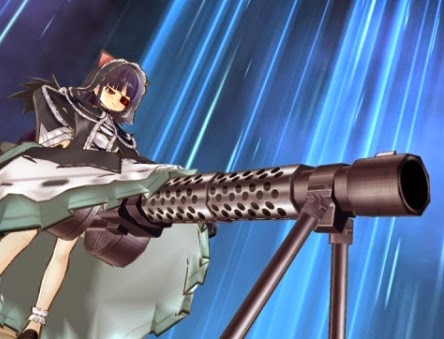 The franchise that caused one critic to have a meltdown without really understanding (or having played) it when it was released on the Nintendo 3DS earlier this year, Senran Kagura, is coming to PlayStation Vita.

Senran Kagura Shinovi Versus is going to be much the same game as the 3DS title. This means big-chested female ninjas beating the bejeebus out of one another while their clothes are shredded into tiny pieces.

As with the previous game, the over-the-top insanity promises to be both silly entertainment, and a satirical look at how traditional action games from Japan work. The plot itself will be a direct sequel to the 3DS game (which we loved, for the record), and pits the girls of Hanzo National Academy with their evil twins from the Hebiko Clandestine Girl’s Academy.

There will be 20 playable fighters in the game, each with their own combo system, as well as a new feature – a 4-player online battle mode.

Throw in the fact that the game will look spectacular on the Vita’s lovely screen, and we suspect this will be a sleeper hit when it’s released in Fall of 2014 in the US. There will even be a retail edition, courtesy of XSEED Games.

No word on a European or Australian edition, though I suspect the 3DS game was successful enough that we’ll see a release at some stage as well.

Last chance! Compete with us in the first Mario Golf DDNet tournament!