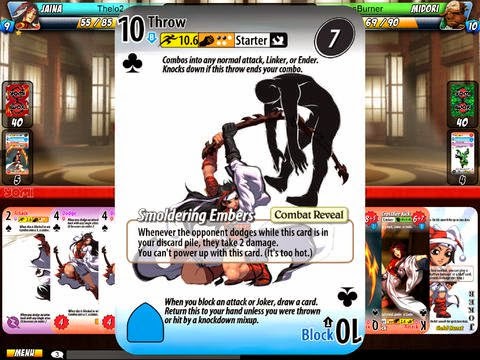 The fighting game genre is one which really hasn’t changed a whole lot since its inception. Ever since players of Street Fighter 2 back in 1991 realised that using certain moves one after the other created an unescapable chain, the “combo” was born and along with it, so was metagame theory. David Sirlin, the designer of Yomi, is no stranger to the fighting genre having competed at a tournament level and worked with Capcom on Street Fighter’s balance. Yomi is a strategic card game, but the mechanics reveal Sirlin’s deep love of the fighting genre and all its trappings. Yomi is not only great for fighting game fans who want something a little different, but also a great entry point for players new to the metagaming aspect of competitive multiplayer.

Sirlin coined the term “yomi” to describe a stage of thought, grounded within game theory: the first yomi was what you planned to do, the second was what you would do knowing your opponent would counter your first plan, and the third reacted to your second plan being countered. While this sounds impractical and overly complex, Sirlin argues that high level gamers subconsciously consider these yomi and use them to gain the upper hand. The best players weren’t only masters of the game, they were masters of reading the opponent as well. Whenever you hit the attack button, your opponent could either try to attack, block or throw you. If your attack is blocked, you surrender advantage to your opponent but if your attack connects, you then get a chance to pull off the most damaging combo you can.

In Yomi, your hand represents the moves you have at your disposal. In each round, both players reveal a card at once: either an attack, a throw, a dodge or a block. Then whichever the move which wins the matchup resolves, either allowing the winner to perform a combo or draw a card. The decks are 52 card poker decks with the jokers added, although each character has unique stats for each card. Each card also has two sides to it, so you’ll never find yourself backed against a wall. 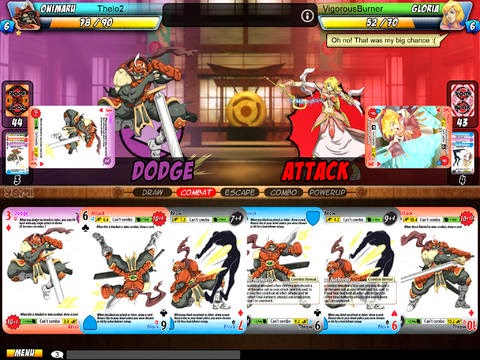 The characters are well designed and would not look too out of place in a Street Fighter or Guilty Gear game. Their costumes are vibrant and their fighting styles are clear through illustrations on their cards. Unfortunately, the game lacks a story mode or any flavour text, so we never get to find out who these people are aside from their appearance and playstyle. Thankfully, each character is designed with a specific fighting game playstyle in mind: there are the rushdown characters, the defence heavy walls and the characters who punish the opponent’s mistakes. If you identify with any fighting game playstyle, you’ll find someone worthwhile to use in Yomi. The roster isn’t small either, with 10 initially available and another 10 unlockable via an in-app purchase.

Yomi’s tap and drag interface also lends very nicely to iPad devices. There are a fair share of fighting game ports on the system, although the touch screen is rarely precise enough to provide a satisfying gameplay experience. Yomi’s biggest strength is that it distills the strategic elements from the fighting game genre and recontextualises them for a new audience. Fighting game fans will find something very familiar with the flow of a Yomi match, but the gameplay is something more conducive to a portable tablet rather than an arcade cabinet. The main downside however is that the focus on strategy places a higher emphasis on mind games and card memory: while a casual fighting game player might still have fun by mashing buttons, randomly selecting cards in Yomi will never result in a victory. The fun comes only from competition, and doing so requires learning the ins and outs of all the character matchups to know exactly what your opponent will be throwing at you. 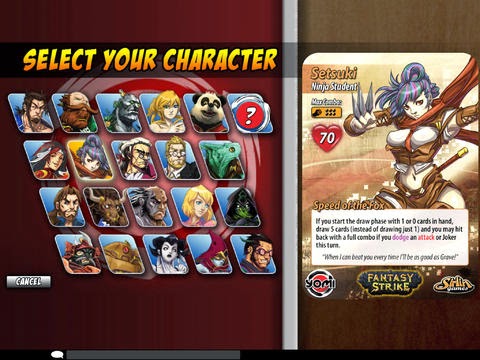 Yomi relies heavily on online competitive multiplayer, featuring a robust ranking system which tracks your progress based on character. It encourages finding a “main” and understanding the ins and outs of a character’s main strategy. Due to the way decks are designed, each character has around 10-15 unique “moves” at their disposal, in addition to a special ability. This is a far cry from the long combo strings we’ve come to expect from console fighting titles, although the moves are all nicely varied with their own specific uses. As a testament to Sirlin’s skill at game balancing, Yomi features a potential 210 matchups and I can’t think of one which is unfairly one-sided. That being said, each character is effectively cordoned off into one main strategy. The challenge comes from finding a style which is unpredictable yet still suits the strengths of the character.

Since the game is in its early release stages, I haven’t had much of a chance to try out the online multiplayer, but the few games I played were quick and intuitive. The chat function also logs all the moves of the game, so you won’t need to take note of every card that’s been played. The lack of single player options however means that Yomi will likely thrive or wane based on its community. Too many high level players and not enough interest will further drive off newbies, and in this case I can’t justify Yomi’s price tag at all.

That being said, David Sirlin has crafted a clever, well balanced and highly cerebral game which will be sure to delight fighting and strategy fans. It can be a hefty investment, both in price and in the sheer amount of learning material, but those who stick with Yomi will find a rich competitive game with tournament potential. I can only hope the game’s community matches the effort put into the game’s design.