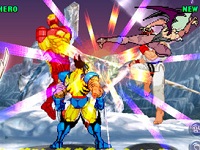 There’s two game genres that are always going to be a challenge to recreate without physical buttons: the FPS and the fighting game. There’s been a couple of good examples of each (see Soul Calibur as a prime example of a good fighting game on the iPad), but unfortunately despite an effort in touchscreen optimisation Marvel vs Capcom 2 is not one of those.

The base game is still one of Capcom’s greatest fighting games. On a numbers level, the fighting is still supremely balanced, and the ability to bring in three unique fighters from a large cast opens up a wealth of strategic option. Capcom has done a really great job with the attack buttons too. The default layout sticks four buttons on the screen: a regular kick and punch, and then touchscreen unique buttons that use flicking motions to allow for a range of special abilities. To activate, players press and hold the button, then flick in a direction. Different things will happen depending on which direction the player flicks in. There are two of these buttons, and it takes no time to become very comfortable with what is a very intelligent control system. For more experienced players it’s also possible to head into the options and change the system to a more traditional arcade layout of six on-screen buttons. 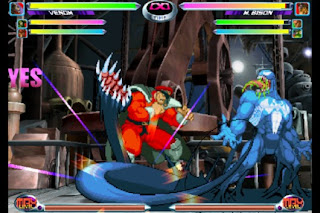 When the action really heats up, Marvel Vs Capcom 2 remains a hugely entertaining game. The action is way over the top, and the combo system to pull off those spectacular attacks is hugely satisfying. This game was Capcom at its peak, and the idea that fuelled this game remains solid. Those rare moments when the problems I’m about to outline aren’t making you want to smash you iPad against the wall are moments where this game is pure, simple fun.

The problem lies not with the virtual buttons, but on the other side of the iPad – the virtual movement stick is just terrible. Soul Calibur’s virtual movement stick was designed beautifully, with a rapid reset recoil when players let go of it. It made it easy to pull of double taps, quick ducks and counter movements. The virtual pad on Marvel Vs Capcom is precisely why people who don’t know better claim the virtual controls suck. They play this kind of game with a cheap, generic and unresponsive virtual stick, and assume they’re all like it. It just about ruins Marvel Vs Capcom. 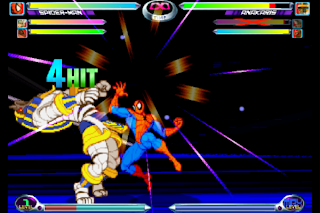 With a lot of tweaking (it’s possible to reorganise the buttons to whatever layout individual players are comfortable with) eventually Marvel vs Capcom becomes playable. It’s never quite comfortable, though, and that’s a real problem in a genre where you don’t really have the time to be thinking about whether you’re pressing the buttons right.

If the controls don’t kill the game, the presentation will. While I realise that this is by iPad standards a retro game, it’s still no excuse for the shoddy transfer. Sprites are grainy and colours look like they’ve been filtered and muted down. The bright explosive colour we’re used to in these kinds of fighting games is nowhere to be seen. At times I wasn’t sure whether this was an iPad game, or just an iPhone game that’s been blown up and stuck on the iPad. Even the menu system looks like it was thrown together in a minute using MS Paint. The music was never great on this game, and has, in a twist of irony, made the transition beautifully enough to the iPad to become even more noticeable, and even more noticeably bad than its usual forgettable self. 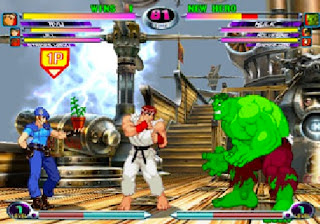 At least there’s a full range of gameplay modes. Score attacks, arcade mode and a Bluetooth-based multiplayer game are all on offer. No online multiplayer is a wasted opportunity though.

It’s also worth noting that I experienced regular crashes playing this game. Now, perhaps that’s my iPad (though it runs virtually every other game out there perfectly), but it’s a little hard to want to play through the game when it’s likely to crash on me and waste any and all progress I make.

Terrible form here Capcom. While I appreciate that now is a good time to release a Marvel-themed game, what with the Avengers on the way and all, It’s not on to make such a shoddy port of such a good game when Namco Bandai has already shown us all it can be done. No excuses for hardware or platform, this is just a bad game.